I was never into gay rights..this is why I am now!

Gay rights were never something I had any interest in.

As a teenager, my view ran along the lines of "I know I'm gay, I always have done so what was the point in shouting about it, I'd rather just get on and live my life". I saw people that did as attention seeking, over the top, or even 'militant'. However as an adult my view evolved to make me understand that gay rights are important. Why? Because as a gay person, there is a very large chance that equal rights will affect you.

Its not about shouting to everyone that you are gay, its about drawing attention to the fact that some things aren't as they should be. If I could speak to my eighteen year old self who didn't care one bit about gay rights, I would tell her - "when you're older and want to marry your soul mate, be listed as your child's mother on its birth certificate, to not be turned away from a hotel for being gay, or simply have the same legal rights as a heterosexual person, you will care!"

When I met L, in 2004, I was 19 and she was 18. As we were young, and not thinking about marriage or babies, equal rights weren't something I considered. Civil Partnerships didn't exist until we had been together a year, in 2005. As well as not being able to have a 'Big Day' with your partner, there were also other implications to not being legal partners as anyone who has seen the movie 'If These Walls Could Talk 2' will remember (I've only seen it once as I found it too upsetting, although I love the third part with Ellen Degeneres and Sharon Stone!). Part of the movie features an older lesbian couple, who have lived together for 30 years. When one partner, Abby, suffers a stroke, her partner Edith is not allowed hospital visiting as she is not family. She discovers after sleeping in the hospital waiting room, that Abby passed away the night before, and no one informed her . When Abby dies, although they owned a home, as their mortgage was in Abby's name, Edith is left with the option of renting it back from Abby's son. Without marriage or Civil Partnerships, in the eyes of the law, your relationship held very little value. 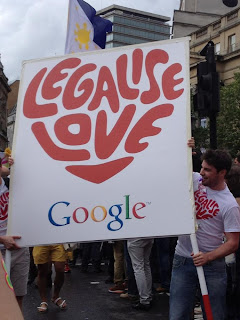 Even when Civil Partnerships were made a reality, we didn't realise that this was any difference to marriage. In fact, we didn't realise how different they were until we booked our wedding venue, and we took some information about ceremonies from the local registry office. We then realised that we were having a Civil Partnership, not a wedding, and that we weren't allowed to be referred to as bride in the ceremony, and that legally we wouldn't be each others wife, we would be each others civil partner. Romantic, huh?! It appears we weren't the only ones, most of our families, colleagues, and friends - even gay ones - also didn't realise, and were really surprised, that gay marriage isn't yet legal. This is another reason why gay rights campaigns are important - to highlight that inequality still exists.

It annoys me when anti equal marriage protesters point out that Civil Partnerships offer all the same legal rights as marriage, and the only difference is a Civil Partnership requires the signing of a document, whereas a marriage is based on saying vows. Yes, this is true, but to two girls dreaming of a fairy tale wedding and being told they may kiss their bride, this offers little comfort. Why should this be the case just because they love a woman not a man? And if there is such little difference between the two ceremonies, why the resistance to bring in equal marriage? The quote 'if you don't agree with same sex marriage, don't have one' springs to mind.

After our big day my future wife and I plan to start a family. We have already decided that L will carry any children we have, although we are hoping to use my eggs for at least one of them. For the first four years of our relationship, if we had have had a child, the partner who had given birth to the child (in our case, L) would be the only one named on the child's birth certificate (and therefore the only legal parent) even if if we had have used my eggs, and the child was biologically mine. However, after large campaigns, in 2009 the law was changed to allow lesbian parents who had gone through donor insemination or IVF together to both be named on the birth certificate as the child's parents. In 2010 this was extended to gay male couples who had used a surrogate.

Furthermore, until the introduction of The Equality Act (Sexual Orientation) Regulations 2007 made it unlawful to discriminate in the provision of goods, facilities and services on grounds of sexual orientation, gay couples could be refused services such as hotel rooms simply based on sexuality. It seems crazy, to turn away business based purely on judgements made about a couple's relationship status, but without a law to protect the right of gay couples, there was no way of stopping this from happening.

Without campaigners for gay rights,  the world would be very different, or at least, would take a lot longer to change. Events such as gay pride can often lose their meanings behind fancy dress, alcohol and fun themed floats, but the reality is our world has evolved so far, and we should be proud of the advancements made in striving for equality, but unfortunately there are still so many inequalities, and thus the real meaning of gay pride should not be forgotten. 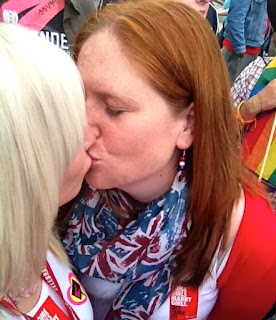 Being in support of gay rights, and showing this support when needed, is not about a loud, in your face, exclamation of your sexuality to anyone that is within earshot. However you show your support, its about recognising that one day, its likely that you will want, or do want, the rights that are available to heterosexuals, and so we owe it to ourselves to tell people why we should have those rights.


Posted by Lauren And Sarah