We published a post previously about why it is important to be supportive of gay rights campaigns - this comes in many forms, and everyone shows support differently. However, we were recently discussing the power of providing a positive example of simple normality.
Of course, sometimes a strong statement is needed. Pictures of a lesbian couple kissing in front of anti-gay protesters in France recently went viral  - the picture is passionate; from the kiss between the two women, to the anger in the faces of some of the protesters. The couple's argument is love, nothing more and nothing less, and their argument is shown perfectly.


Many LGBT people attend Pride parades, and some attend other protests or campaigns. However, pride doesn't stop after the parade has finished. As a couple, we think its really important to give out the equality message in our day to day life.
Walking hand in hand as a gay couple, in the supermarket or the local high street, gives a strong yet silent message, that can be as powerful, if not more powerful, than a loud protest.
Not that we have anything against loud, public celebrations of pride within homosexuality, as how much we loved World Pride this year proves! 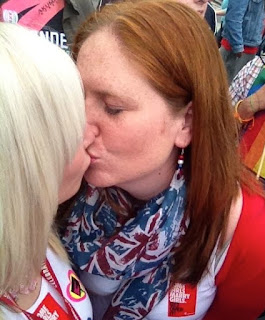 But I like the fact that me and L are a positive example of normality - we do the food shopping, we walk our dog, we go shopping for clothes, very occasionally we get annoyed at each other over the housework, we love getting a takeaway then snuggling on the sofa, we go for coffee, we laugh for hours at silly things, we go on cinema dates, we talk about which flowers will look best at our wedding, we look at baby clothes and talk about what our child will be like - in short, we are like the majority of couples, and I think people seeing this can only be a good thing.

At our places of work, a lot our colleagues are women aged late twenties and early thirties, and so  there has been a lot of wedding planning recently. With each new future bride, there has been excitement at the first flash of an engagement ring, discussions of family squabbles messing up table plans, and hugs when wedding gowns have been chosen. We have not hesitated to discuss the same things as the heterosexual girls when planning our wedding, and have been treated exactly the same. We have been given the same advice, shared the same magazines and vendor leaflets, and I think this impacts a lot on peoples view of gay rights. This in turn leads to an awful lot of support for equal marriage - we are just like the other girls planning their weddings, and after seeing this, our colleagues find the inequalities hard to comprehend.

In our experience, the majority of homophobia comes from ideas based on outdated stereotypes. Our parent's generation see gay people as promiscuous and flamboyant, with no interest in traditional relationships, and feared that we would follow the same path. Of course whilst theres nothing wrong with following that path, I think its a good thing for people to view a wide spectrum of examples of relationships within the gay community. We have been asked, by older family members and work colleagues how we feel not to be able to have children - to which we have replied "we will have children, L plans to carry them". Again, just an outdated view that if you are gay, you can't procreate. My grandparents were concerned that I would have to shave off my long blonde hair and quit wearing dresses when I told them about my relationship, because they strongly believed in the stereotype that all lesbians look like men. Educating people about "what lesbians look like" (i.e. pretty much the same as what women look like - there are boyish straight girls, and femme lesbians!)

Admittedly,  at times, its easy to take the simple route, and not hold hands in public for fear of judgement, but its very unlikely that anyone in a supermarket for example, would actually comment, for fear of being challenged if nothing else. I think the best option is to judge the situation - the only time we would maybe not show affection in public is if we felt it in any way unsafe to do so.

I'm aware that people around us; our families, friends and colleagues, and hopefully a few strangers too, have looked at us and realised that we're just like the other couples they know - and thus deserved to be treated equally. I can honestly say that within my family, and particularly at work where I work with a huge group of women, I feel completely 'normal'. My relationship is not judged any differently as any other woman there - and I honestly believe that that comes from us both acting as though our relationship is just that - normal. We quietly get on with our lives together, without making a huge deal about that fact our soulmate is a girl, and in turn people around us act just the same.

Pride continues long after the last float, and comes in more forms than a rainbow flag, quiet and simple gestures that show that our relationships are just as valid as anyone else's permeate the subconscious and act to dispel myths and stereotypes just as effectively. What better excuse to walk hand in hand next time you go out together? 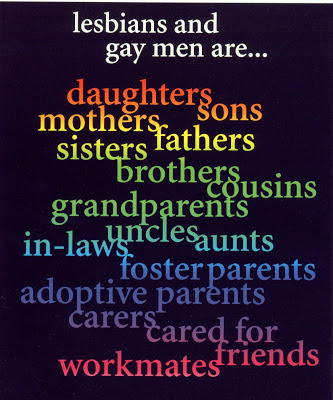