One of the most prevalent arguments against the legalisation of gay marriage, at least from a religious point of view, seems to be the issue that gay couples cannot, without assistance, procreate. This argument does not seem to be extended to infertile heterosexual couples, or those who of an older generation who are marrying. The Church extend this argument by adding that same-sex couples who adopt, or who conceive with help from donors and surrogates, are ruining the structure of a 'normal' family.

So what is the definition of this 'normal' family that us who love our same-sex partners are supposedly causing the downfall of?

Husband, wife and 2.4 children evidently is not the majority family structure in modern Britain. Both mine and L's families and friend's families feature single parents, same sex parents, disabilities, non biological parents, and children that are different skin colours to their parents or other family members. It's interesting that a good proportion of our families are white, fairly educated, fairly middle class people, a lot of whom attend church and were married in those Churches. Yet have married people who have disabilities, those of another ethnic origin, who have a different religous view, those who already have children and so have created a 'blended' family...the list goes on. Yet the Church is more than happy for them to marry, because they aren't, god forbid, wanting to marry someone who is the same gender as them!

Deviations from the 'normal' family set up are clearly not limited to same sex parents. Recently I was chatting with a close friend about her two year old son. The child's father is not in contact with them, and she has a fairly new partner. She told me how her son is starting to ask if her new partner is 'Daddy'. If not, who is Daddy and where is he? And also, as he is mixed race (as is his mum, though a different mix of nationalities), why do some children at his playgroup are a different skin colour to him? She explained to him that some people have a mum / a dad / two mums / two dads / one of each / bought up by grandparents etc, and furthermore, that people come in different colours! She decided to watch a children's TV channel with her son, to point out to him different types of family. However it soon became apparent that all of the families portrayed were white, consisting of a mum, and dad, a son, and a daughter, with no disabilities. So something that started out with the intention of being educational in the multi-cultural, multi-faith, multi-family-setup society we live in, turned out to be an education for my friend, that within our media, even for young children, who are at an ideal age to accept difference as normality, the Mum, Dad, 2.4 children set-up is still the mainstream.

There is a range of literature available for children who discuss in a very simple way different types of families. But in our opinion, it shouldn't be the case that she has to search for specialist media and resources to show her son he has a normal family, whether that normal family be one Mum, two Dads, or just a mixed-race family. It would be so much more effective, in our opinion, to have TV shows, and books, and films, and computer games, where the family set-up 'isn't' the storyline. If it just so happened that Mummy was Indian and Daddy was Black, or the little one lived with Grandparents or Aunty, maybe our children would grow up with an altered view of what is normal. A view that becomes a reality once they understand how the wider society works. Having said that, it is quite amazing that at two years old my friend's little boy has already started to question the differences in his family! 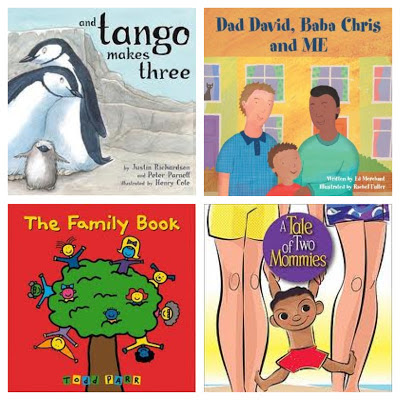 People ask us if we are worried that when we have a child, it will be bullied for having two mums. Our answer? Yes, of course it has crossed our minds, but kids are bullied for all sorts of things. At school L was bullied for being overweight and for having red hair. I was bullied for...well, what wasn't I bullied for?! For being short, pale, clever, posh (I'm from Birmingham so I have no idea where posh came from!), for liking rock music, for wearing different clothes to my schoolmates, for not being interested in sport...the list goes on!

I'm more worried about having to answer questions which our children are bound to ask. 'Why do I have two mums?' "Do I have a dad?' or even if they have no questions, when they get older and learn how babies are made, they are going to realise a part is needed which did not come from me or L!
What if at 18, the child wants to find our sperm donor? What if it sees this man as 'dad'? To us it will be in no way a parent, it will be a donor, no more the child's family than people who receive the blood we donate to blood banks. We are glad that we have friends who either have, or plan on having children, so our child will know that other children who also have two mums. There's always a chance that when our child starts school, it won't be the only one with same sex parents, but even if they are, we hope that society as a whole is evolving enough to realise that actually, we are just like any other normal family.


Posted by Lauren And Sarah