Sunbeams and serenity. And sheep.

The one aspect of wedding planning we hadn't quite comprehended when we started out on this journey was just how hard we would both have to work to make our dreams a reality. Our lives have now become a constant cycle of one of us coming home from work as the other heads out, and good quality time, just the two of us, is often the part that suffers. With this in mind, I received a text one morning last year from L telling me that she had booked us a Groupon deal to Wales. She tells me it was 3am, she was on a hurried break at work, and was so fed up of missing being together and of always being at work that she decided to book it, there and then. I have to confess I was a little dubious about where we would end up!

So fast forward a couple of months and our trip was booked for this week. We set off on Monday 11th March, in the morning, complete with our bags, Willow (yep she came too!) and two big bags of pic'n'mix, planning to stop at a Starbucks on the way. However, we didn't realise our journey would be solely on country roads, no Starbucks in sight! As we got closer, the roads were unmarked and literally as wide as our car - luckily any vans or tractors coming towards us took pity on the city girls and reversed for us! 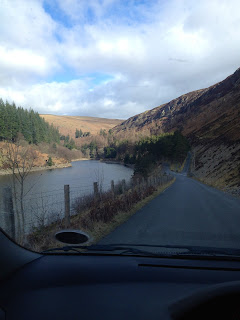 About two hours later, we arrived in our destination of Rhayader, a small town in Powys.
When we checked in at the hotel, we were pleasantly surprised. The area was very pretty, and the hotel was lovely - our room had a gorgeous bathroom, aswell as a mezzanine floor over the bedroom with a sofa, fire, and TV. There was even a box of homemade biscuits left for us! 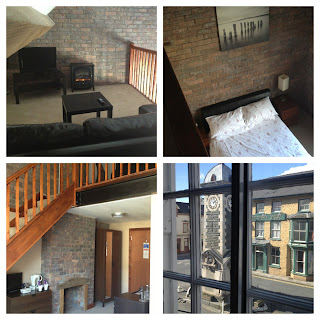 We unpacked and then ventured out to explore - the area was like going back in time. There was only 9 restaurants/takeaways including pubs that served food - coming from a big city that has hundreds, this seemed bizarre to us! The population of Rhayader is around 2000, compared with around 1.1 million in our home town of Birmingham, and the shops were all small independant stores. Even the houses looked completely different
As we wandered, the snow began to fall, and gradually got thicker and thicker until we were walking through a full on blizzard! We took this as a cue to walk back to the hotel, although the walk through the snow was beautiful. 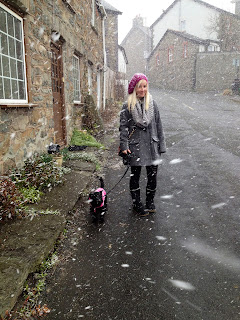 That evening we had a gorgeous meal in the hotel that we would have gladly paid double for in Birmingham - although the waitress wouldn't have had to hold the card chip and pin machine in the air to get signal like the one here did!
On Tuesday morning, after a yummy cooked breakfast at the hotel, we decided to take Willow on a nearby riverside walk we had spotted the day before. Although it was cold, the sun was shining, and we did not see a single other person on the whole walk - just mountains, the river and the sky. At one point, we had to walk down to an area of the riverbank that was lower than the pathway - it felt like a hidden paradise with the sunbeams pouring through the trees above. It was one of the most beautiful, peaceful things we have ever experienced, and I kept two pebbles from the riverbank, to remind us during less peaceful times of that moment. It was amazing to just stop, and think, it won't always be work and never seeing each other - there are beautiful moments to be appreciated, and we are so lucky to have each other. 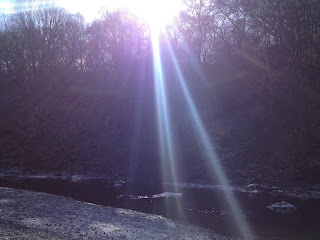 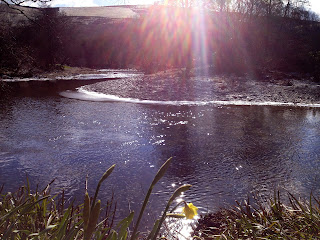 After returning back to our room and having mugs of tea (of course), we took the car and drove to nearby Elan Valley.
In the 1890's our home town of Birmingham viewed Elan Valley as the ideal source of clean, safe water, and built a complex of dams and resevoirs, which are still pretty impressive structures today.
We spent a couple of hours climbing and walking around the valley, accompanied by Willow of course!
It was amazing, but scary at times, to see the bridge we had walked over at the beginning of our walk getting smaller and smaller, but when we got to the top, it was worth the climb. The view was stunning, it was so quiet, and again, we were the only people as far as the eye could see. 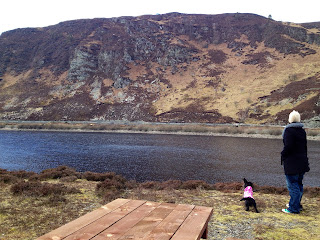 We then took a slightly easier walk back down the mountain, and stopped off at the visitors centre for hot bowls of homemade soup and bread, and home made cakes - after a cold walk up and down a mountain, this was so comforting!
We had a relaxing evening, after all the mountain air had left us refreshed but tired - we made use of the lovely whirlpool bath in our hotel room, and after getting a chinese takeaway, we settled down on the sofa.
The next day, after checking out of the hotel, we set off in the car towards Aberystwyth.
The drive was the most scenic we have ever been on. Although I was a little nervous at times when we were on tiny roads with steep cliff edge drops next to the car, it was breathtakingly beautiful - mountains, rivers, huge forests of pine trees, and walls of icicles. We have since discovered that the drive is described by the AA as one of the ten most scenic drives in the world. At one point a huge bird of prey flew over our car, which we later learned was a Red Kite - a rare member of the eagle family whose wing span averages almost five feet!
On the way, we stopped off at Devils Bridge, which consists of three bridges, built on top of one another, over a ravine and a waterfall. The most recently was built in 1901, after the second in 1753, and the original in 1075–1200. According to the legend the original bridge was built by the Devil, as it was too difficult for mortals to build, and according to stories, the Devil built the bridge in return for the soul of the first life to cross it! 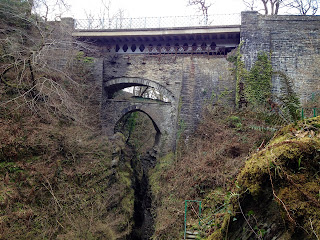 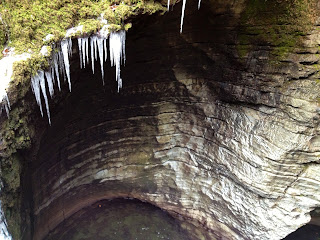 When we arrived in Aberystwyth, we headed straight for the beach. Although it was sunny, it was very cold, and the beach was completely deserted. Willow absolutely loved her first visit to a beach, racing around in the sand and running up to the waves. 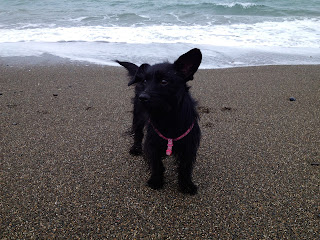 And then it was time to drive home! Although we were very much looking forward to a break away from work, and a chance to spend some time together, we did not expect our surroundings to be one of if not the most beautiful place we have ever seen, and for it to be so peaceful. For the majority of the time we had no phone signal or internet connection, and we both thoroughly welcomed this focus on what is around us, and is something we are keen to incorporate into daily life.
I'm a big believer in fate, and believe this holiday full of our favourite things happened now to show us that we are very lucky, and need to focus on what makes us happy, not worry about work, or to do lists, etc.
Our break really showed us the value of quality time, appreciating life together, and how lovely the world around us is,  and we hope these are things that will stay with us long after we got home from Wales! 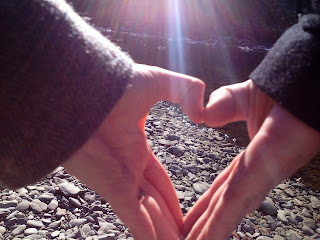