I have turned a corner. I am no longer making a good copy of the mother in About a Boy, the one who cries all the time, unexpectedly and out of nowhere, and doesn't really see the way forward. Things turned an enormous corner last week, I woke up with a sense of purpose, I know things will get better.

My wonderful Dad is making great strides in getting better. His memory is still not brilliant and he needs to be reminded pretty much everything, from when to eat to the need to get dressed. But he has strength and some feeling in his affected side and his mind is definitely clearing the fog of confusion day by day. He is even talking about going back to work, and we are all starting to believe this might be possible, next year maybe. He and my Mum are an amazing team at the best of times, but their strength has really shone through this, they are working together to find the way out. And the light at the end of the tunnel is starting to appear.

The affect my Dad being ill had on me was something I had never considered would happen, as usually I am the bottle up emotions and soldier on until things are sorted type. I really did crumble under the weight of it, held up only by my desire to get through it for the sake of my wife, and my family. One day, out of nowhere, things changed. Perhaps it was a combination of things - my new job is getting closer to starting, getting me out of the one that has become a tedious monotomy, S has a new job starting on Monday, and we celebrated our anniversary and her birthday, both occasions gave way for celebrations, happiness and so much love. And maybe that's what helped to pull me round. The light at the end of the tunnel started to appear for us, too, and I know, things will only get better.

It feels like our lives have begun again, as we have a little more money after finishing paying off all things wedding related, and we have really started talking about the future....and babies! We went shopping for Sarah's birthday, and whilst there we bought something we have resisted for so long - our first item of tiny person clothing!! Although we already have books for our future child, there has been many a time we have wanted to buy something we absolutely adored, for future tiny person, but have resisted as I believe it there may be an element of bad luck about it, like we are testing the future. But seriously, look, halloween socks, how could you say no?!? 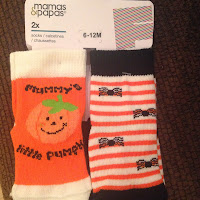 We finally got round to using a gift card from Ed's Diner Sarah won ages ago on Twitter, and also made use of a free milkshake for her birthday voucher! We love diner food, and have a good deal of appreciation for all things American, it's a good job we have 3 weeks in the States planned next year!! 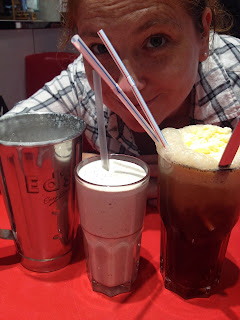 We also spent a weekend working together! As a favour to our wedding photographer, as she was shooting civil partnerships and weddings, we manned her stall at the NEC's National Wedding Fair, the biggest and busiest wedding fairs in the country featuring 250 stalls. Helped by another of our photographer's clients, who we really got on with, we chatted to hundreds of brides and their families, advising them on photography, and their wedding days in general! It was fun to chat to other gay people, and people getting married at the same venue we did, our honeymoon destination, and near to L's parents second home in Malta. It made all three of us miss planning our wedding, and all said how much we wanted to wear our dresses again! Our photographer has our album and final photographs ready, we just need to find time to go and collect them - we are so excited to see them. After I saw L at work on the BBC documentary Midwives she was filmed for, it was nice for L to see my doing my job of selling, and I think she has a new found respect for how exhausting retail can be!

Last night we went on a date we had organised at short notice, after getting a good deal on tickets, L booked us two seats at the NIA for Danny Elfman's Music Of Tim Burton. A little unsure what to expect, we went along, me more excited than L due to being a HUGE Tim Burton fan since my childhood, lines from one of his films even featured in L's proposal to me. We were lucky to have amazing seats, in the centre of the balcony. The concert consisted of a BBC orchestra and 45 piece choir, playing Danny Elfman songs from Tim Burton films, accompanied by clips from the films and original sketches from the film's beginnings, projected on a screen over the orchestra. This included Beetlejuice, Sleepy Hollow, Alice In Wonderland, Big Fish, Charlie & The Chocolate Factory and Frankenweenie. It was amazing!
Highlights for me (and the whole room I'm sure!) were Victor's piano solo from Corpse Bride, the final music pieces from Edward Scissorhands, accompanied by the scene of Edward carving the snowflakes for Kim, which bought tears to a lot of peoples eyes, and Danny Elfman himself joining the orchestra on stage to sing songs from Nightmare Before Christmas, as he was the singing voice of Jack Skellington in the film. 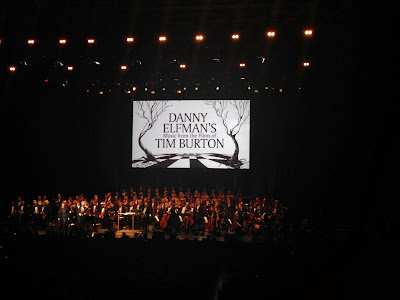 A very busy but fun week!