We love Birmingham! As today is official National Birmingham Day (random!), we thought we would write a post about our memories, past and recent, of our home city. As it's where we grew up, we may be a little biased, but when we moved to Leeds for L's midwifery training, we chose to come back to Birmingham, despite having the choice of pretty much anywhere in the country. It was also where as a child I imagined myself living. We considered things that were important to us, with having a good support of family and friends around us, particularly when we have children, being high on the list.

Many people's view of Birmingham is that it's a undeveloped, rough, industrial, souless place, and if we're being honest, that view is still fairly accurate in a few places of Birmingham! Like any large city, it's split into lots and lots of different areas, good ones, and bad ones - but its also full of amazing buildings, shops and restaurants, so much culture, and is full of creativity, diversity and interesting areas - we love it here, and would not move if money was no object. Well, apart from buying a holiday home in Brighton, obviously!

Our earliest memories of Birmingham are rooted in two of it's best offerings - shopping, and music, and as adults, food!  These are are best memories, past and recent, of our home city.

Shopping
As a child, my schoolmates and I would go shopping in Birmingham city centre with our parents, the Disney Store in particular being a favourite! My best memory of shopping in Birmingham was Rackhams, the city's biggest department store. I thought it so pretty, full of beautiful things and staff who were so friendly and helpful. Aged 16 when I left school it was my first place of employment - at the time it was the best place in Birmingham to work in retail, the staff all had so much pride in their job and were treated really well - it's one of the best jobs I've ever had. The building is still there, now a House Of Fraser but very different to how I remember it, and now shadowed by Debenhams, Selfridges, and John Lewis.
Since the development of the Bullring in 2003, at the time the biggest shopping centre in Europe, Birmingham has become a great shopping destination. Whether its Armani, Louis Vuitton, DKNY and Selfridges, high street giants such as the first Forever 21 in England, or over 100 indie stores and vintage shops, Birmingham has everything! Birmingham is also home to the Jewellery Quarter, which makes 40% of the UK's jewellery - including our engagement rings! We still love shopping in Birmingham, our favourites being Selfridges, French Connection, Zara, All Saints, New Look, Boux Avenue, Accessorize, Hotel Chocolat, and anywhere that sells homeware!

Music
In my teenage years, I began exploring Birmingham's music scene. As a rock music lover, being in the city that invented metal music was brilliant! My friends and/or brother and I would queue for ages to see various rock bands at the Academy so that we'd be right at the front, sometimes seeing three gigs a week.  I was there so often I befriended a few of the sound tech guys and even band members, which meant my teenage years of visiting rock clubs was entry fee and queue free! Not in existence any more, the Academy, sticky floors and all, probably holds my best memories of the city pre L.
Birmingham is also home to huge arenas such as the NIA and NEC, and the Symphony Hall. Not known to us at the time, we were also at the same Spice Girls concert as kids! More recently we've seen singers that hold happy memories for us in small venues, aswell as L giving me a dream come true experience of seeing Danny Elfmans Tim Burton soundtracks performed by a BBC orchestra and Danny, at the NIA.

Food
The food scene in Birmingham is probably it's fastest developing scene at the moment. There are around 200 restaurants in Birmingham, featuring food from over 25 different countries, and has four Michelin starred restaurants - more than any city in England outside of London. It's also home to the twice yearly Good Food Show exhibition.

There are lots of food fairs/markets and we love wandering around the markets and finding yummy homemade treats, as much as we enjoy Birmingham's high end restaurants. The trend for independents has also resulted in an influx of independent coffee shops, one of our favourite things! Our second date was at Starbucks in the city centre, and since then, going to Starbucks for a coffee and a chat has been one of our favourite things to do, from iced drinks on the Bullring steps in summer, to gingerbread lattes overlooking the lights at Christmas.

Another of Birmingham's main food offerings is one of our fave cuisines, Indian food - it's where the Balti originated, and the high population  percentage of Indians, Pakistanis, and Bengali's mean there are a huge array of Indian restaurants to try.

Not forgetting one of Birmingham's most famous creations - Cadburys chocolate! The original factory still stands proudly in it's original spot in Bournville, and still makes the largest proportion of the famous Cadbury's chocolate, which is then transported around the world. Bournville Village Trust, founded by George Cadbury in 1900 ensures that the village of Bournville maintains it respectable appearance and that it's residents adhere to Mr Cadbury's philosophies that you must live and work with the intention of doing good for society as a whole. We are lucky to live very close to such a historic part of Birmingham, it certainly makes for a beautiful drive to work!

Culture, diversity, and quirks!
A quarter of people living in Birmingham were not born in the UK, and just under half aren't white British. With such a mix of cultures, mainly of white British, black, Asian and Irish, the city has a richly diverse culture, particularly in entertainment and food. Birmingham has an Irish quarter (and the 3rd biggest St Patricks parade in the world), china town, and gay village in the city centre, although many of the gay bars are now closed or not well frequented. Birmingham also tends to have a high population of 'colourful characters' - we don't know if the dodgy accent is character building but Brummies are a quirky lot! We are also home to the biggest Christmas market outside Germany - despite it usually being bursting at the seams with crowds, its not Christmas until you've queued for a Gluhwein! (Then re-queued to get the deposit back on your mug :p ) We usually have big family meet ups at the German Market, or for hot chocolate and a catch up!

Buildings and architecture
The first fact Brummies tell outsiders about the city, is always 'we have more canals than Venice!' This said, the canals that wind around the city are indeed a beautiful place to go for a walk, and link many shopping or food areas. Many hours can be lost just following a canal trail and wondering where you'll end up again!

The Mailbox, an old Royal Mail sorting building , now home to Harvey Nichols, Malmaison hotel, a range of smaller shops, a BBC studio and some restaurants is next to the canal, and faced by one of Birmingham's newest buildings, The Cube - a futuristic structure home to a boutique hotel, small spa, Marco Pierre White restaurant, and luxury apartments - The Mailbox and the cube are where we've spent many happy occasions, including birthdays, anniversaries (including our 9 year a few weeks ago), and our hen party. 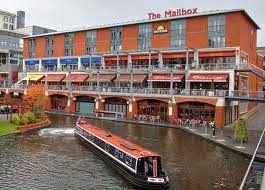 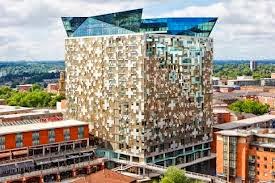 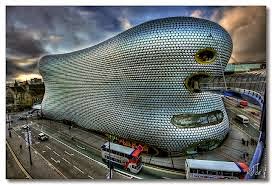 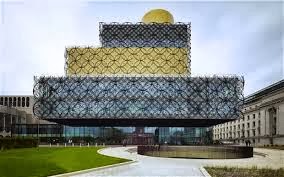 The Custard Factory is the old Birds Custard Factory, now a large, unusual media centre, and Birmingham is also home the the UK's oldest working cinema.

But it's not all futuristic, quirky buildings, we also have 6 million trees, and more parks than any other European city! One of my favourite birthdays was wandering around Canon Hill Park with L and Willow, looking at the beautiful autumn leaves. 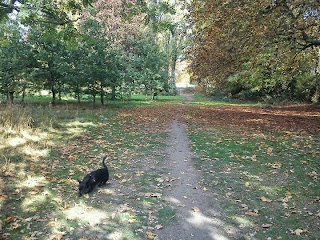 On our second date we wandered down to the City Hall steps and sat by the fountain, something we did again last year to watch the olympics on the giant screens! This area frequently tranforms and re-invents itself to house many a different event, from the German Christmas Market to the beginning of the annual Pride parade, to events marking Chinese New Year, Vaisakhi (Sikh New Year), Eid and more, with all of Birmingham being welcomed to be a part in the celebrations.

Where The Heart Is
Despite our love for the skyline, the restaurants, the parks, our most favourite thing about Birmingham, and the reason we are proud of it, is its our past, present and future. Full of childhood memories, it's where we grew up, and its where our love was born and grew. We loved our 2/3 years in Leeds, but came back for that reason - our families are 20 minutes away, and almost all of our friends are all here too. Everyone has that place where they know the people who love them are a few minutes away, and where everywhere you look has a nice memory - we can't think of a better place to build our family, than home.
Posted by Lauren And Sarah