This week Lauren celebrated her 28th birthday, her 10th whilst we have been a couple, and her first as a married woman! The first exciting part was that the day before we picked up our first pre baby purchase - a new car. Our old one was a 3 door and we obviously need a 5 door for a car seat,  and something bigger than our non existent boot! Lauren promises not to fill this one with empty coffee cups, clothes, and paperwork. I doubt it, but we'll see! 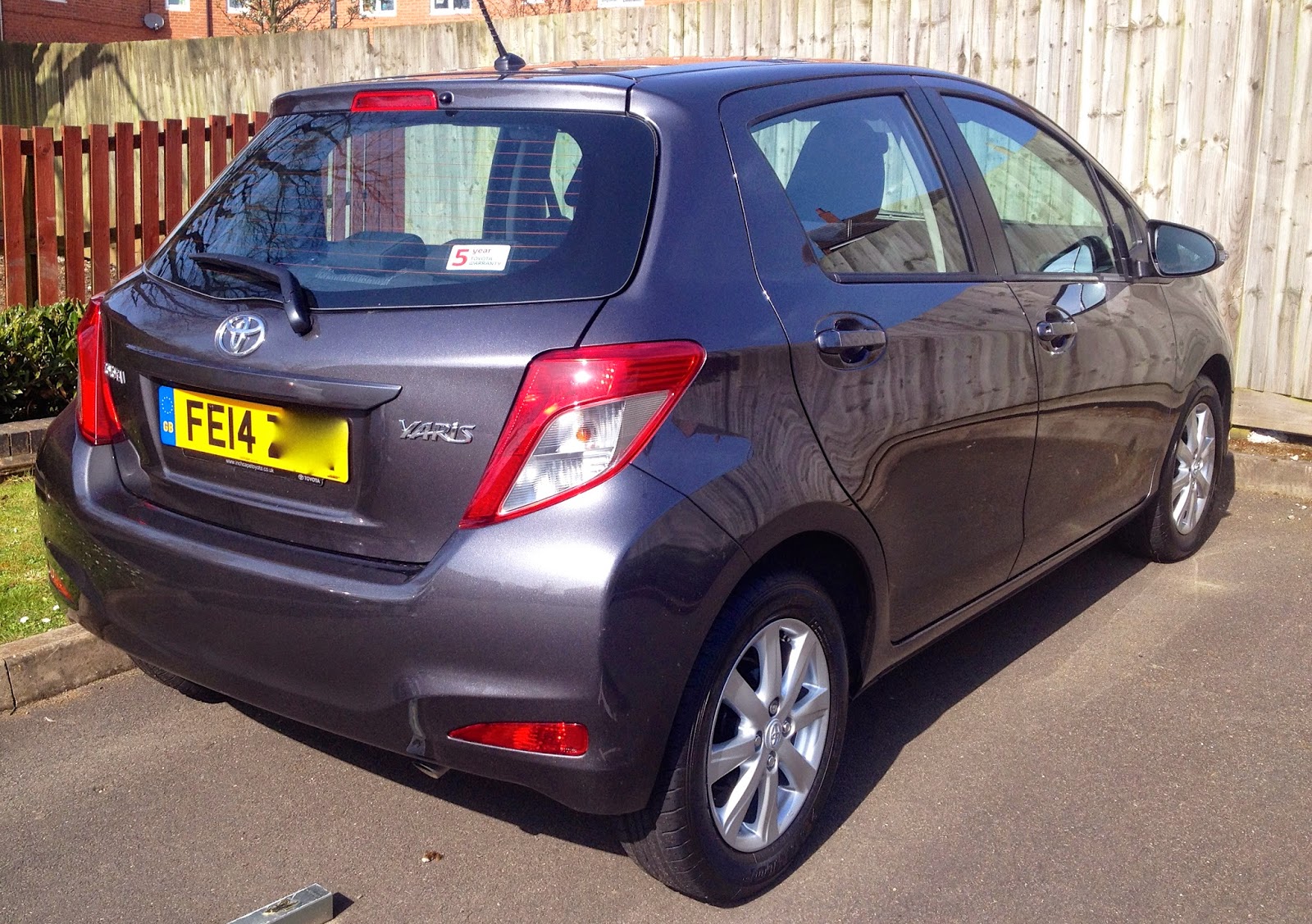 Saturday was a fantastic day in that equal marriage was made legal in England. I think everyone sees this subject in different lights. For us, marriage and Civil Partnership are used interchangeably as they mean, and they are, exactly the same thing. (More of our thoughts on that here and here). But now that gay couples can get married too, there is just one phrase used instead of two. A few people who didn't attend our wedding have asked us if we will convert our civil partnership to a marriage, and we can't really answer this. It was important to us that our wedding day, the day we said our vows in front of our friends and family, was the day our relationship became legally recognised, and we are both more on the side of not converting it. It would seem completely pointless to us to have had our wedding day, the most perfect and beautiful day of our lives, and then have another day to go and sign another document. We understand a cp then a marriage works in some cases - visas, wanting a baby first etc, but one is legally no better than the other. As far as we are concerned, we only want one wedding day, which we have had, and we already married. As as for the issue of marriage and civil partnership, well they are exactly the same thing, so I don't really see the benefit of getting a new piece of paper with a different word on it that means exactly the same as what we've already got! It's kind of like if babies born to gay parents weren't issued with a birth certificate but a delivery certificate, and then one day someone said they too could have a birth certificate if they went back to be re-registered - would we re-register them? Well no because the two things are different words for the same event, a child that entered the world!

I also don't like the idea of our civil partnership certificate becoming redundant, it's so special! So who knows - if Lauren decides she would like to convert, I'm happy to, as it really isn't important to me. We don't need to be told something we already know! Lauren's best friend Harriet has also recently got 'engaged to not be married'! She has been with her boyfriend over ten years, and although the institution of marriage is completely unimportant to them, they wanted to show their commitment, so Harriet has a beautiful (non?!) engagement ring!

We spent Sunday (Mothers Day) with my mom, aunty, cousin N and my cousins baby daughter E. We had a pub lunch then came back to our house for tea - E had lots of fun playing with Willow and handing our daisies to everyone, and my aunty and cousin (who was my bridesmaid) looked through our wedding album.

But back to birthdays!
We drove down to Devon on Monday morning, accompanied by Willow, and checked into our cottage. When we had arrived, driving past stables, I was a little dubious of the five star rating the cottage apparently had. I needn't have worried - inside it was gorgeous!

The word cottage seems to evoke thoughts of a quaint little place with thatched roof, but this place certainly was not, instead it was modern, open, bright and every little detail had been thought of - they had even left chocolate and a bath set for Lauren's birthday, and left us a cream tea out to enjoy. 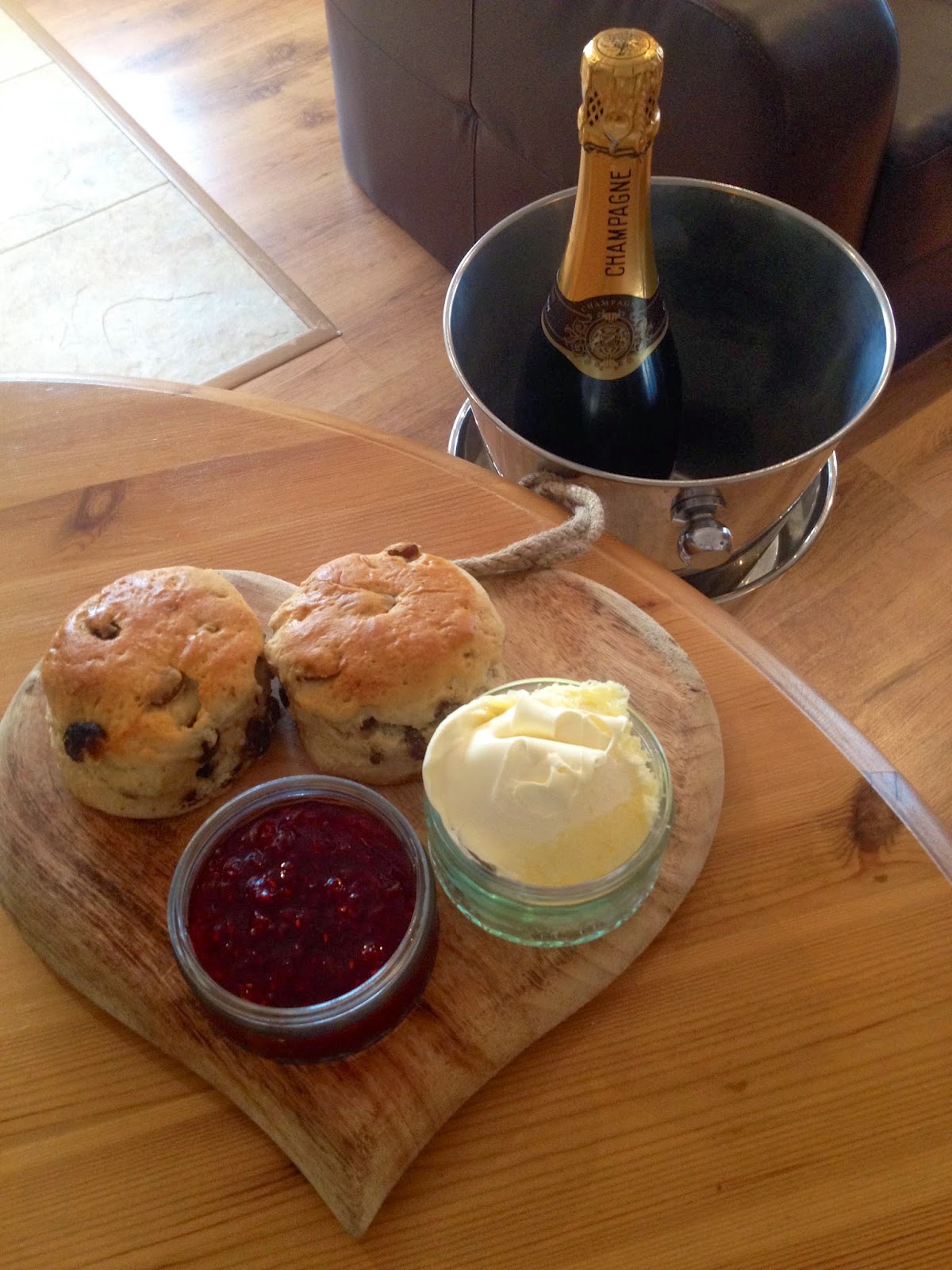 After filling up on scones and exploring the cottage, we headed back out in the car with Willow to drive to the nearby village of Appledore. We had a lovely walk along the coast, and Willow was in her element running around, chasing seagulls, and pretending to be a sailor. 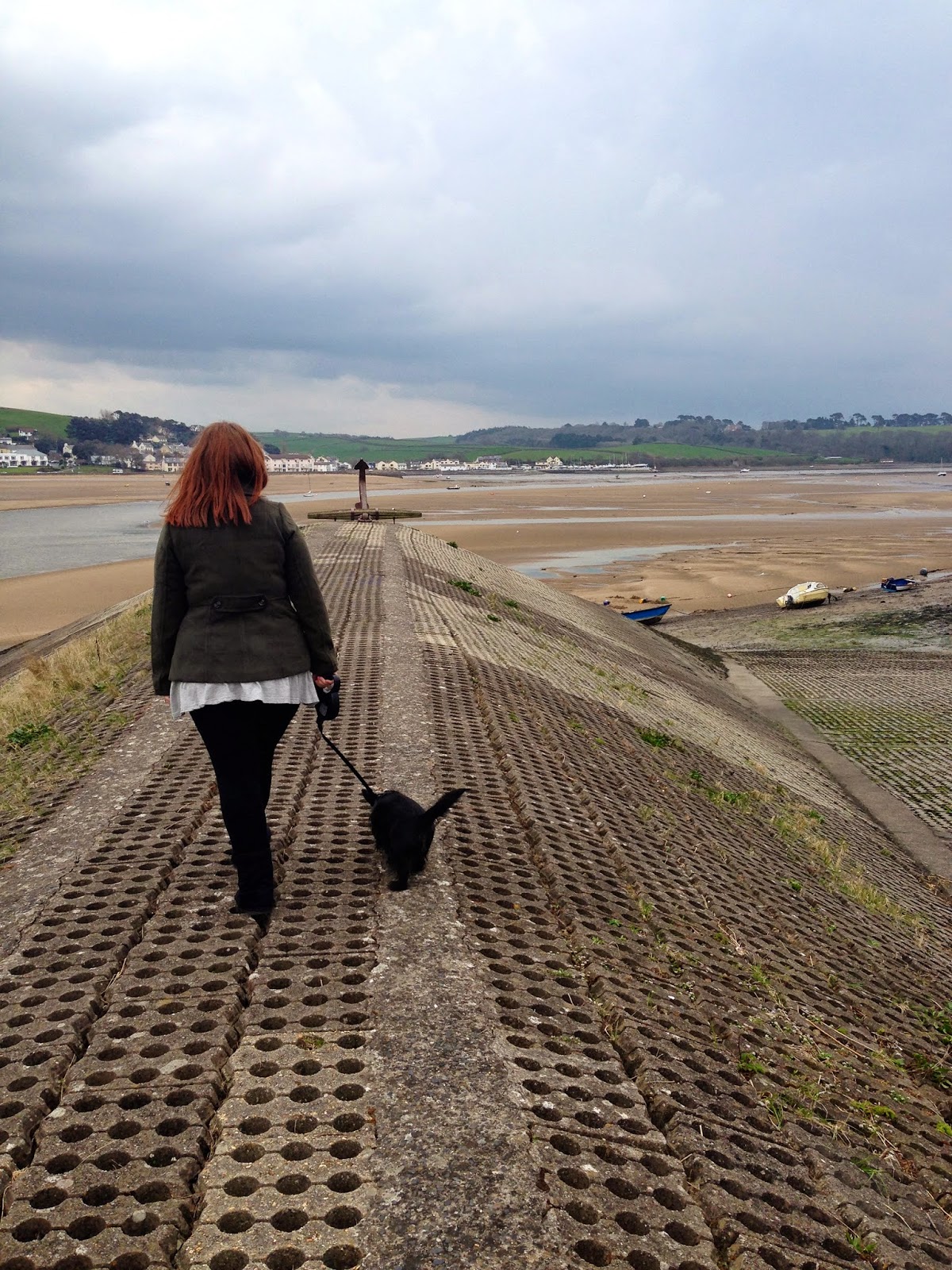 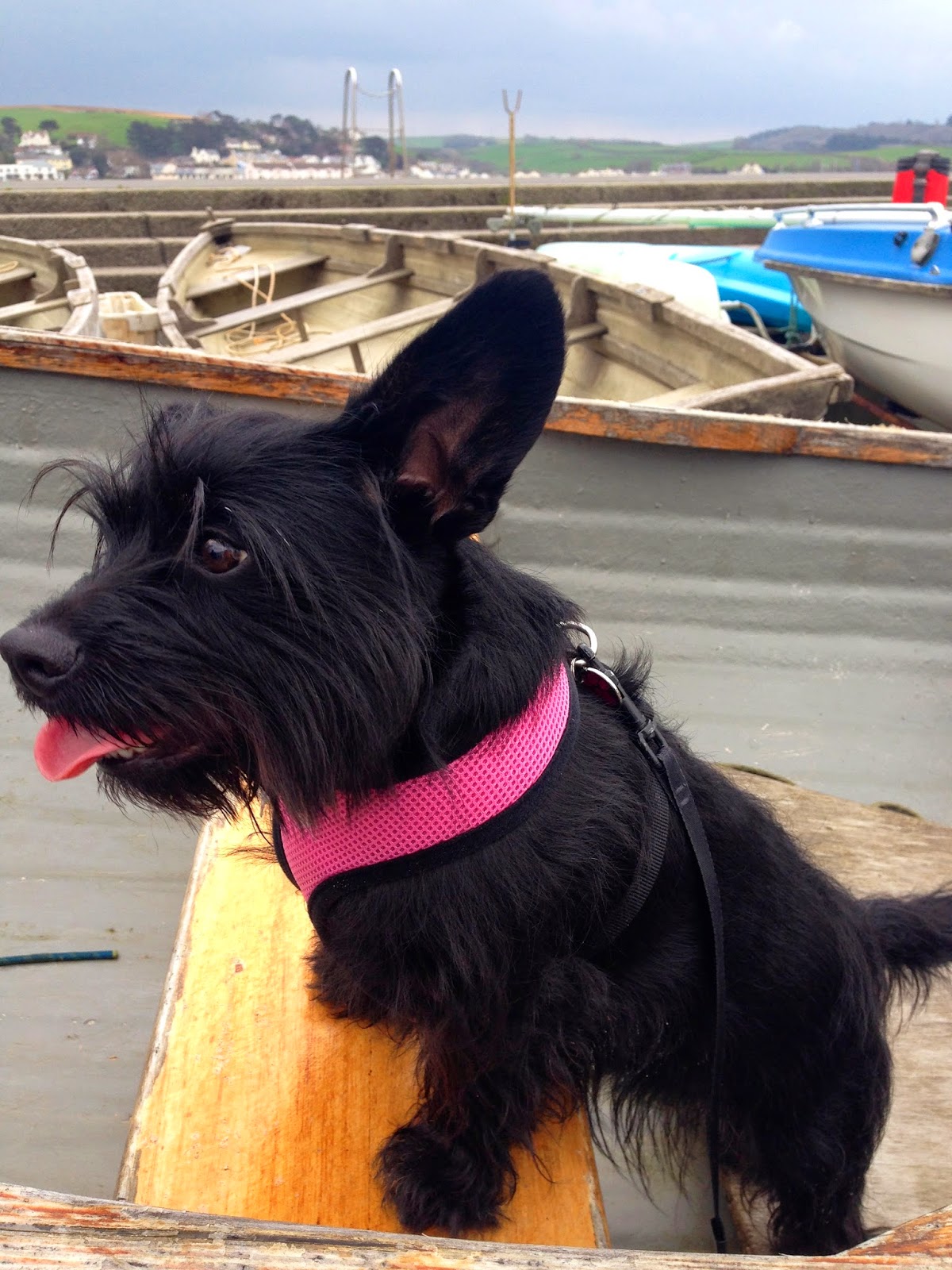 We then drove to Lauren's aunt and uncles house in nearby Barnstaple, where Willow would be spending the night, as dogs weren't allowed in the cottage. Lauren's aunt cooked us dinner, and it was nice to see her, her husband, and her seven year old daughter Lily. Lily was very excited for our visit (perhaps more to do with Willow than with us) and it was a delight to see that Lily very much understood that we were a married couple. She had even set up a 'beach' in her bedroom out of blue and yellow towels, with a blonde barbie doll as me and a redheaded doll as Lauren. We were having a cuddle whilst horse riding whilst a dragon ran alongside us apparently but the thought was there! 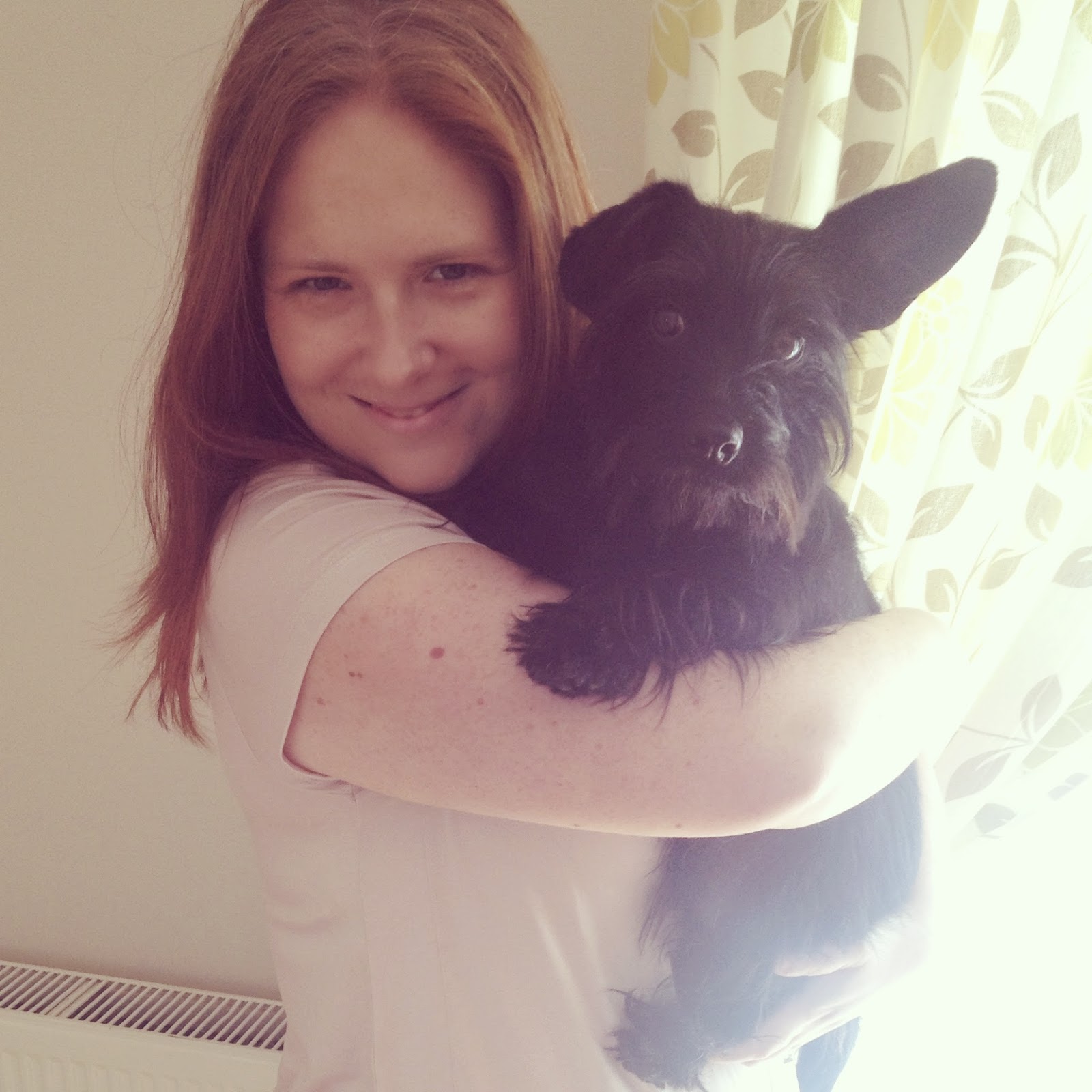 We had a lie-in, then Lauren opened her cards and presents - I love watching her open presents! We were also lucky that the weather had changed from the drizzle that we had arrived to the day before, and was now beautifully warm and sunny. We had a very yummy champagne breakfast (Lauren's favourite meal of any day so it had to be special!), and then waited for Lauren's aunty and granny to come round to drop Willow back off with us. 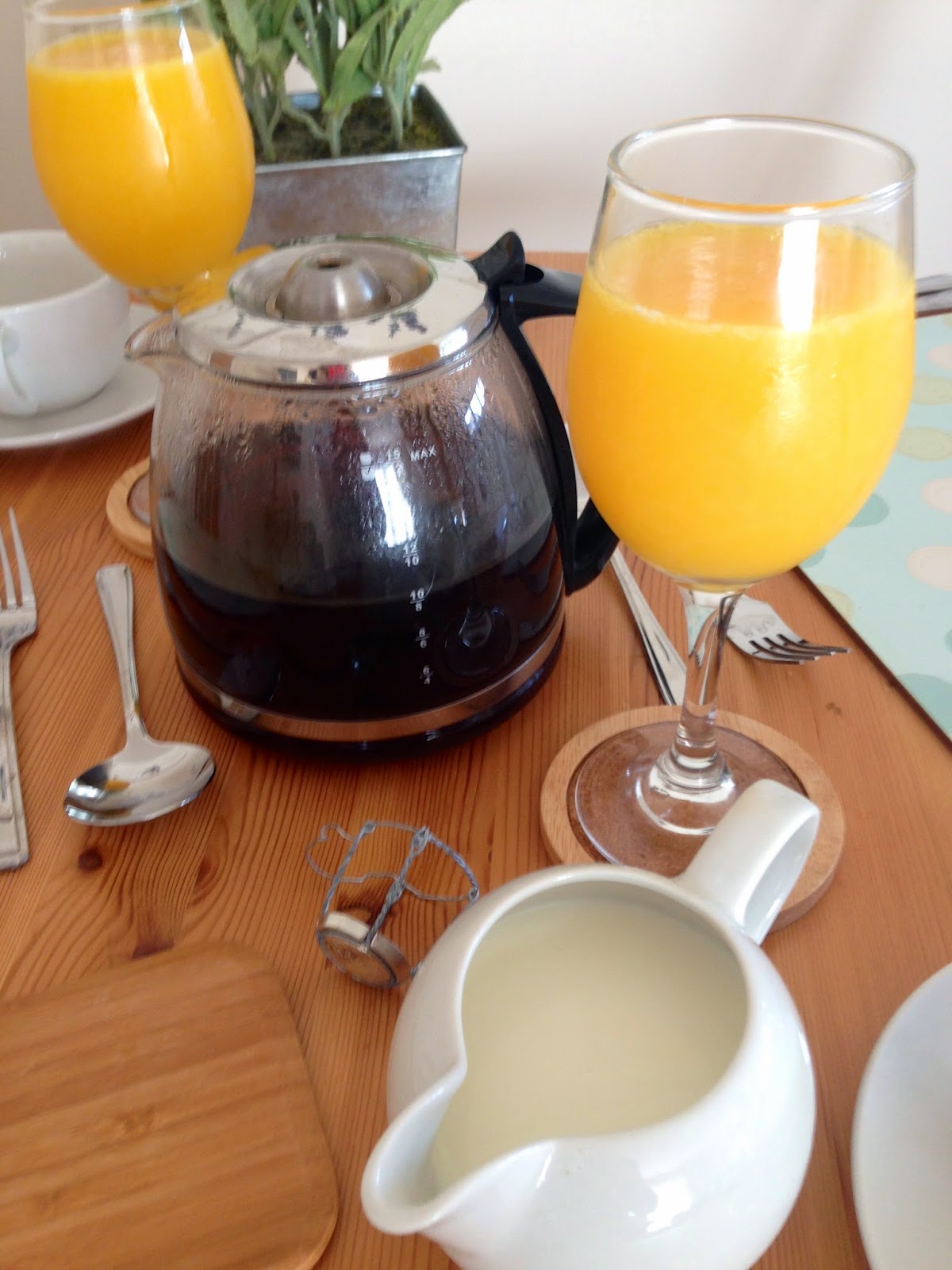 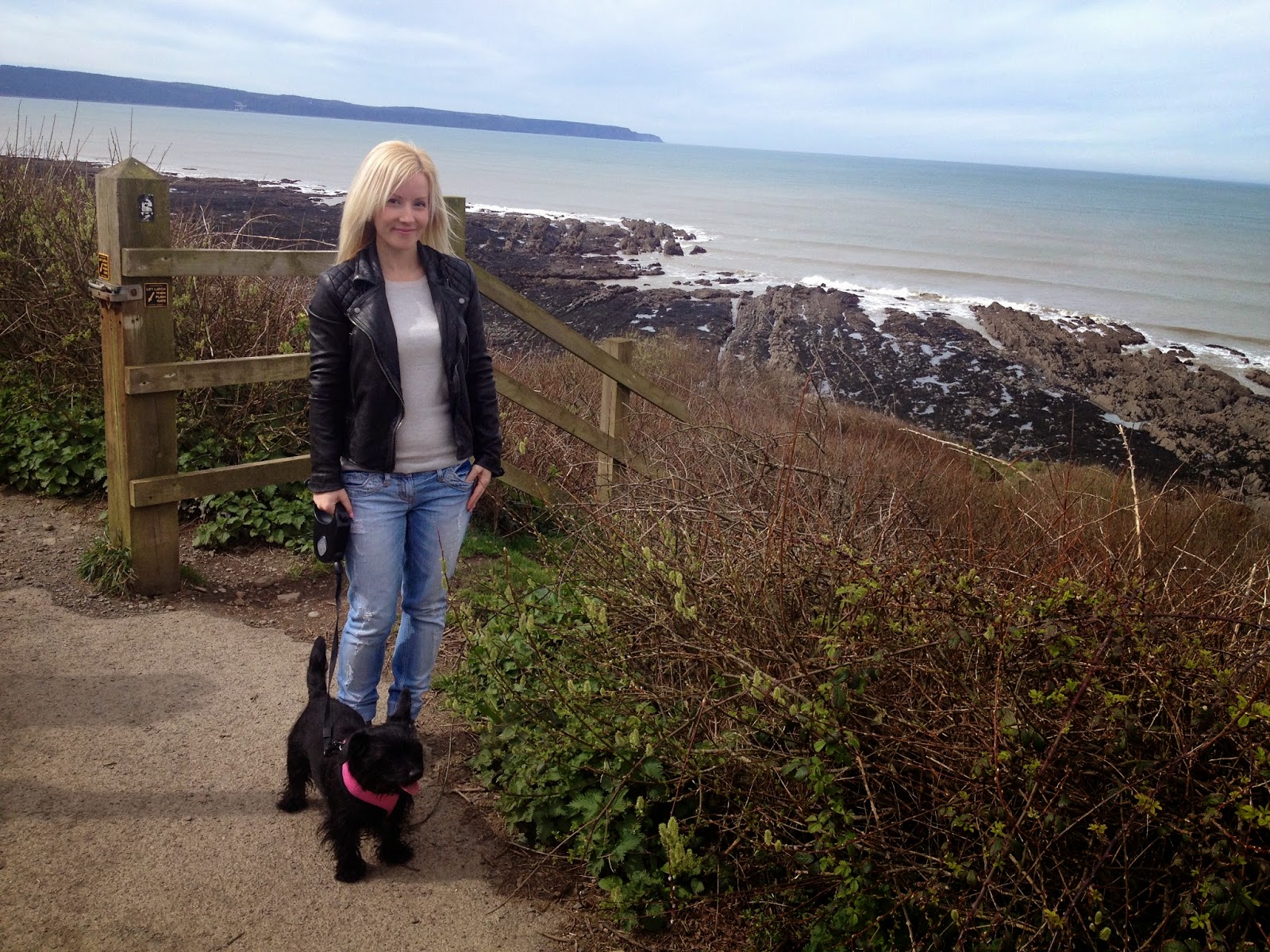 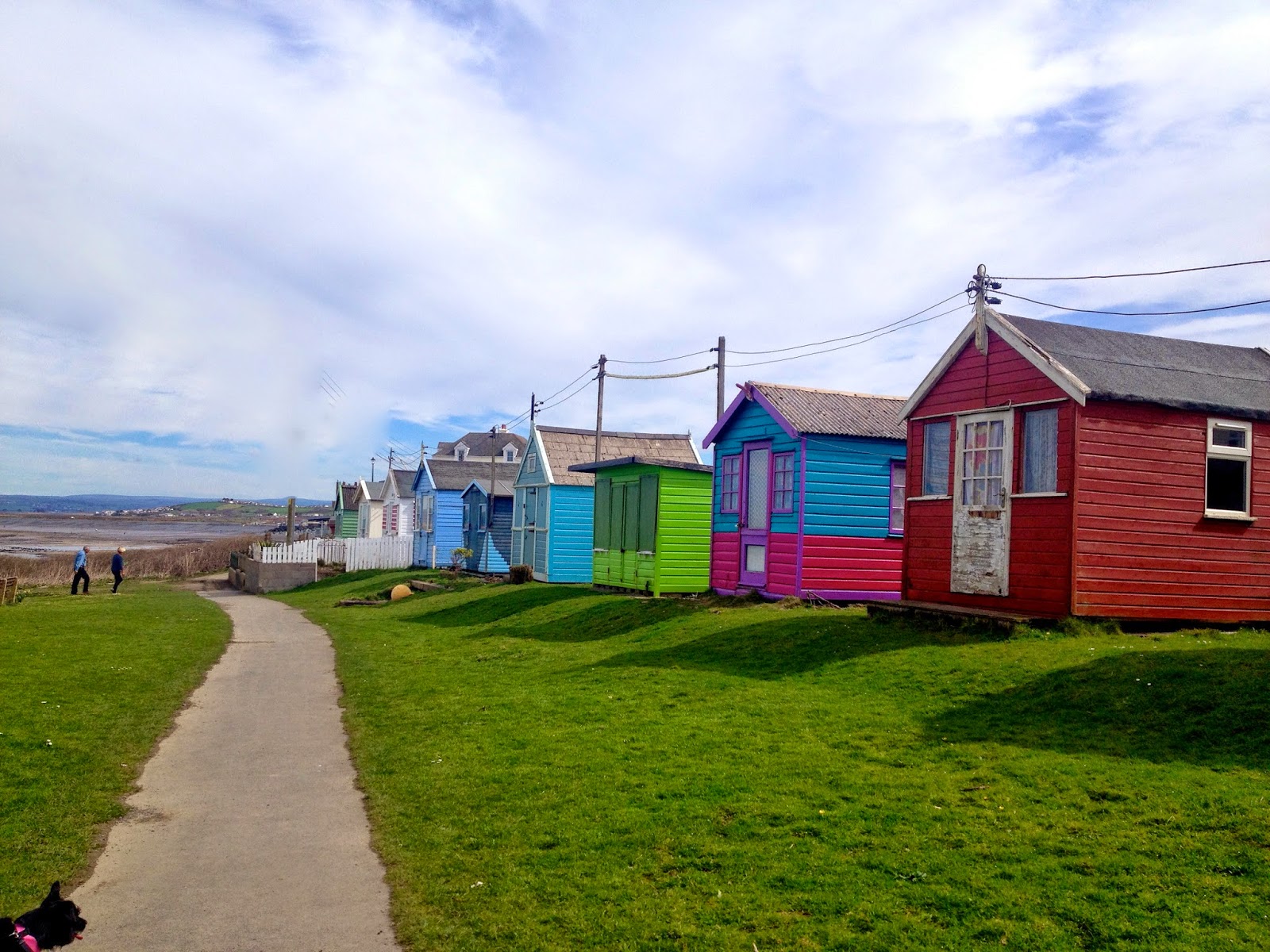 Once in Westward Ho! we came across a restaurant that advertised that it allowed dogs, and it ended up being an amazing find. We sat on a terrace overlooking the sea and had a delicious lunch, with Willow sat at the table with us! 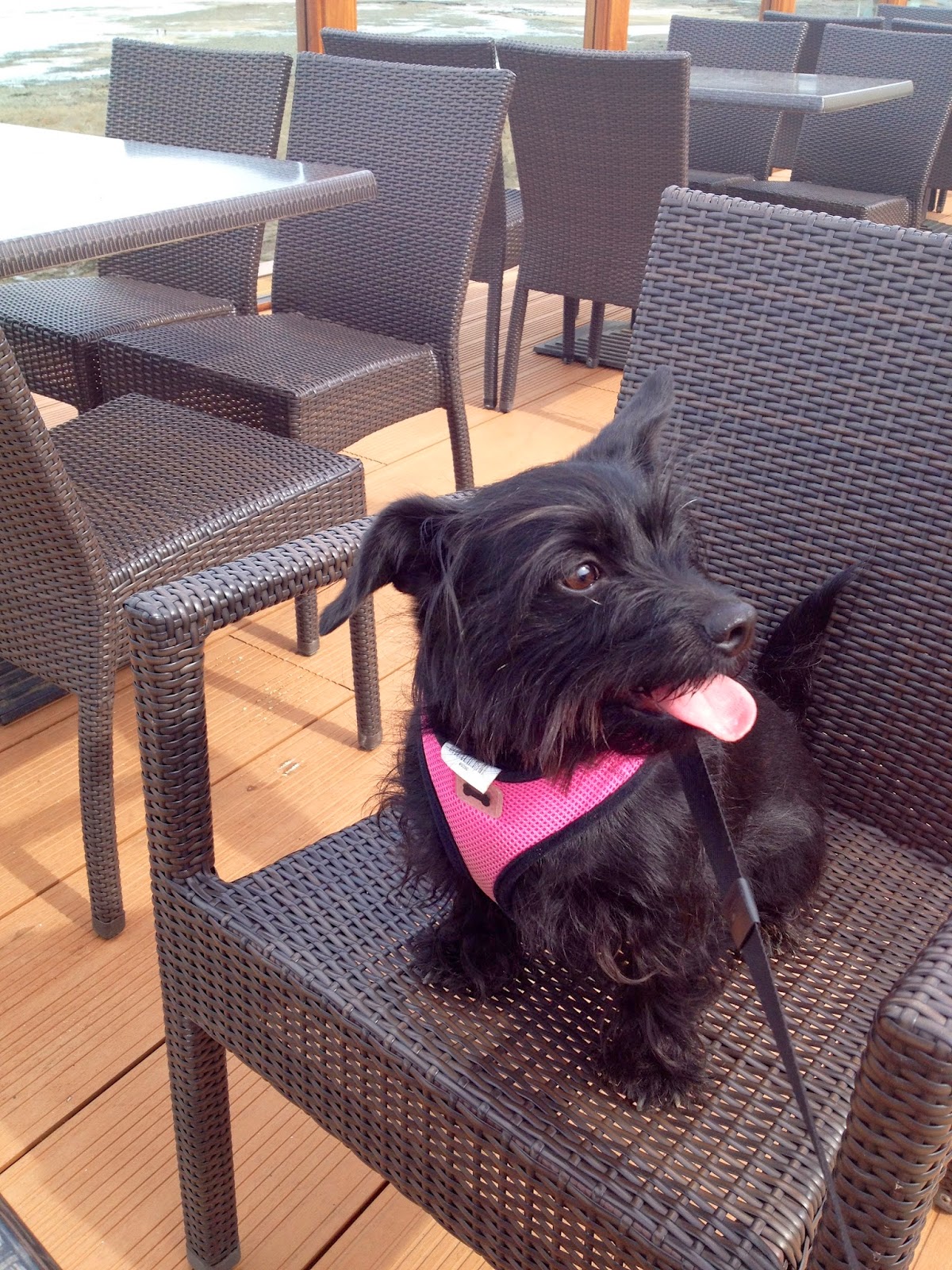 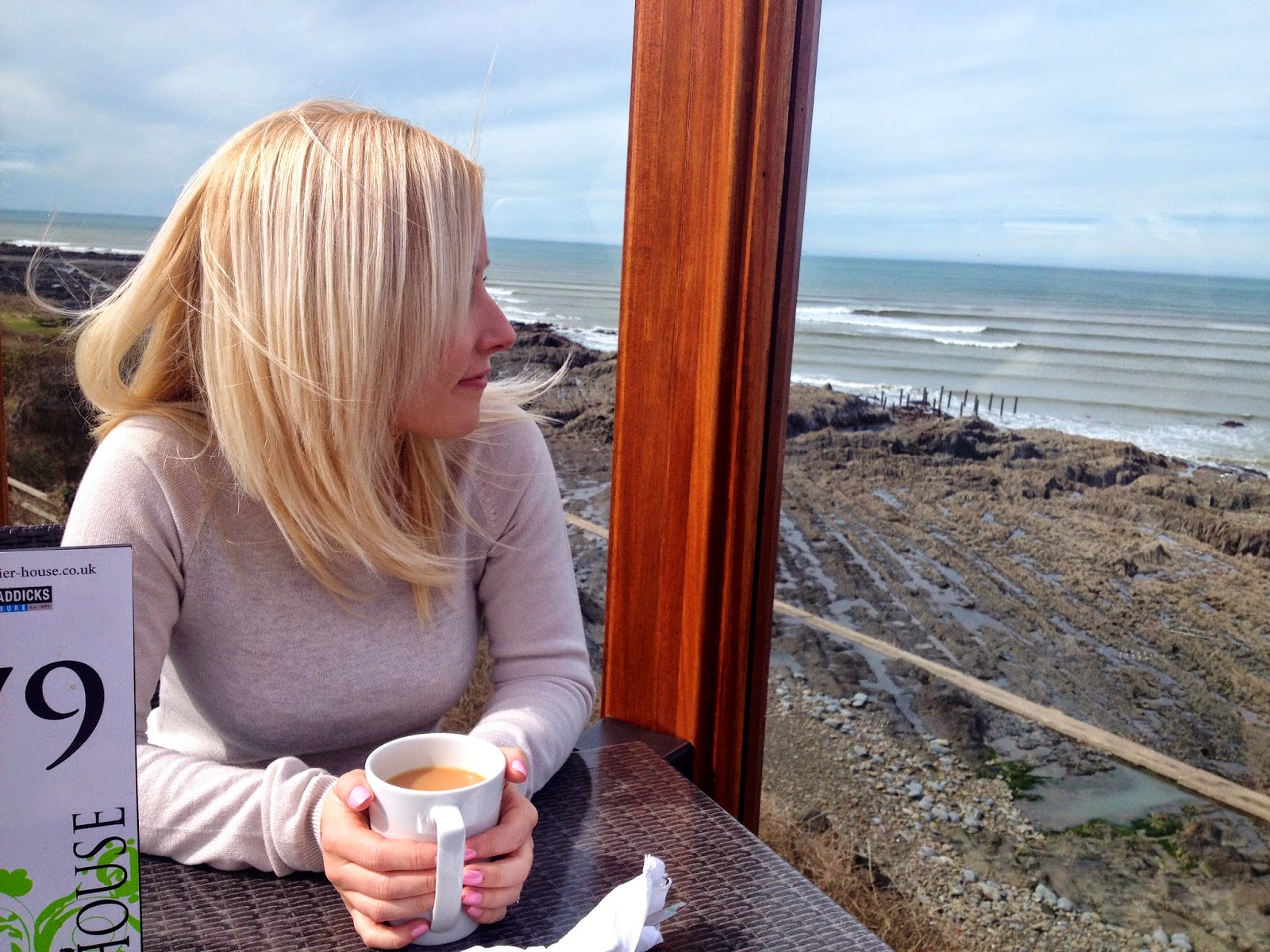 After lunch we made the ascent back up to the cottage - funny when you are walking downhill that you seem to forget that to get home there is only one way back - and that is up the way you came!

That afternoon we drove to Saunton Sands, a beach we had previously visited when being in that part of the country, and popular for being very long, straight and flat. Perfect after the hills of the morning's walk! As it was a weekday, and the sun was just about starting to set, the beach was almost empty, so we had a lovely romantic walk, and Willow enjoyed racing around like a crazy hound, occasionally making friend with other dogs that were too enjoying their late afternoon walks, and finding out that tides move quickly if you stand too close! 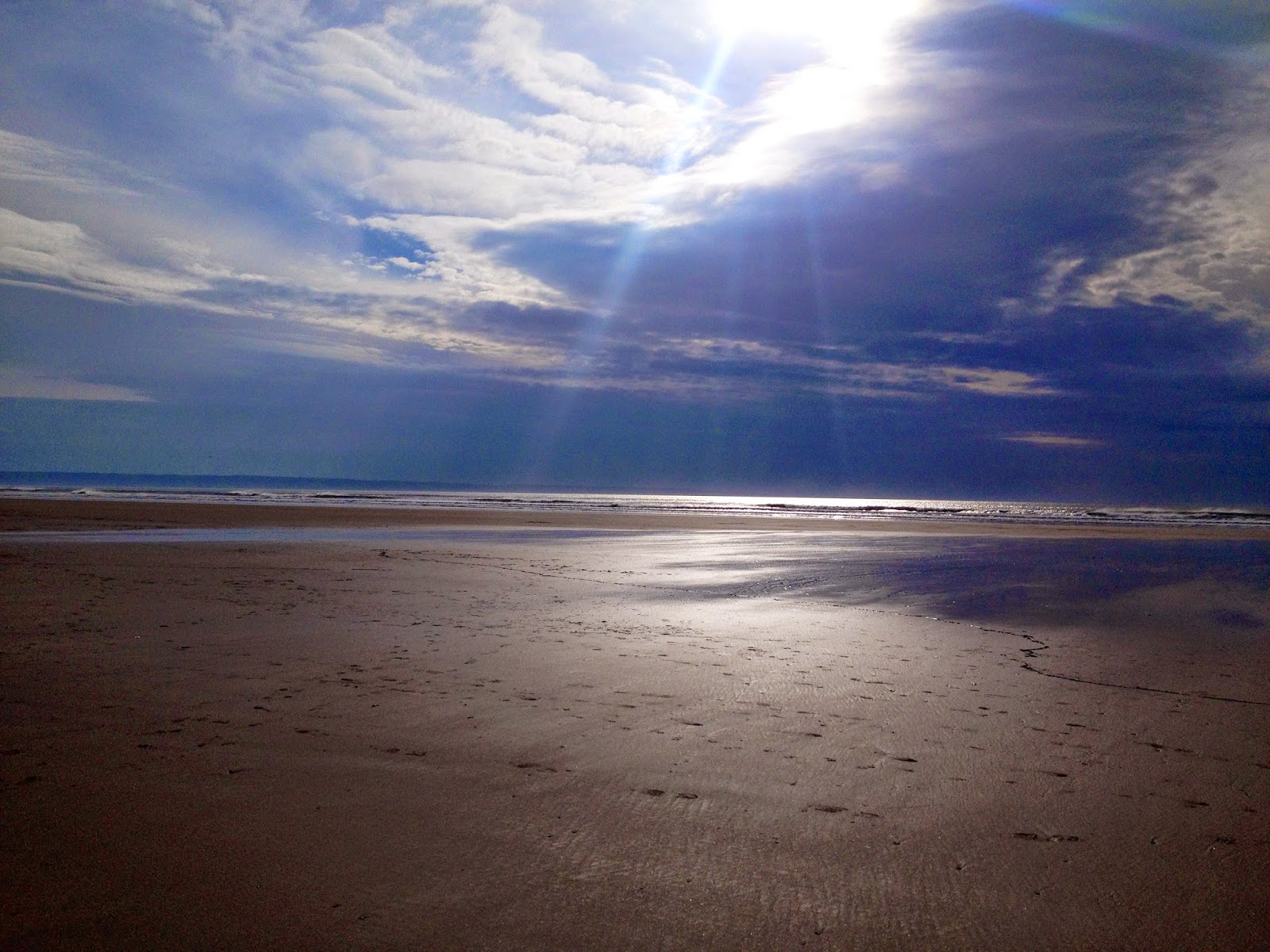 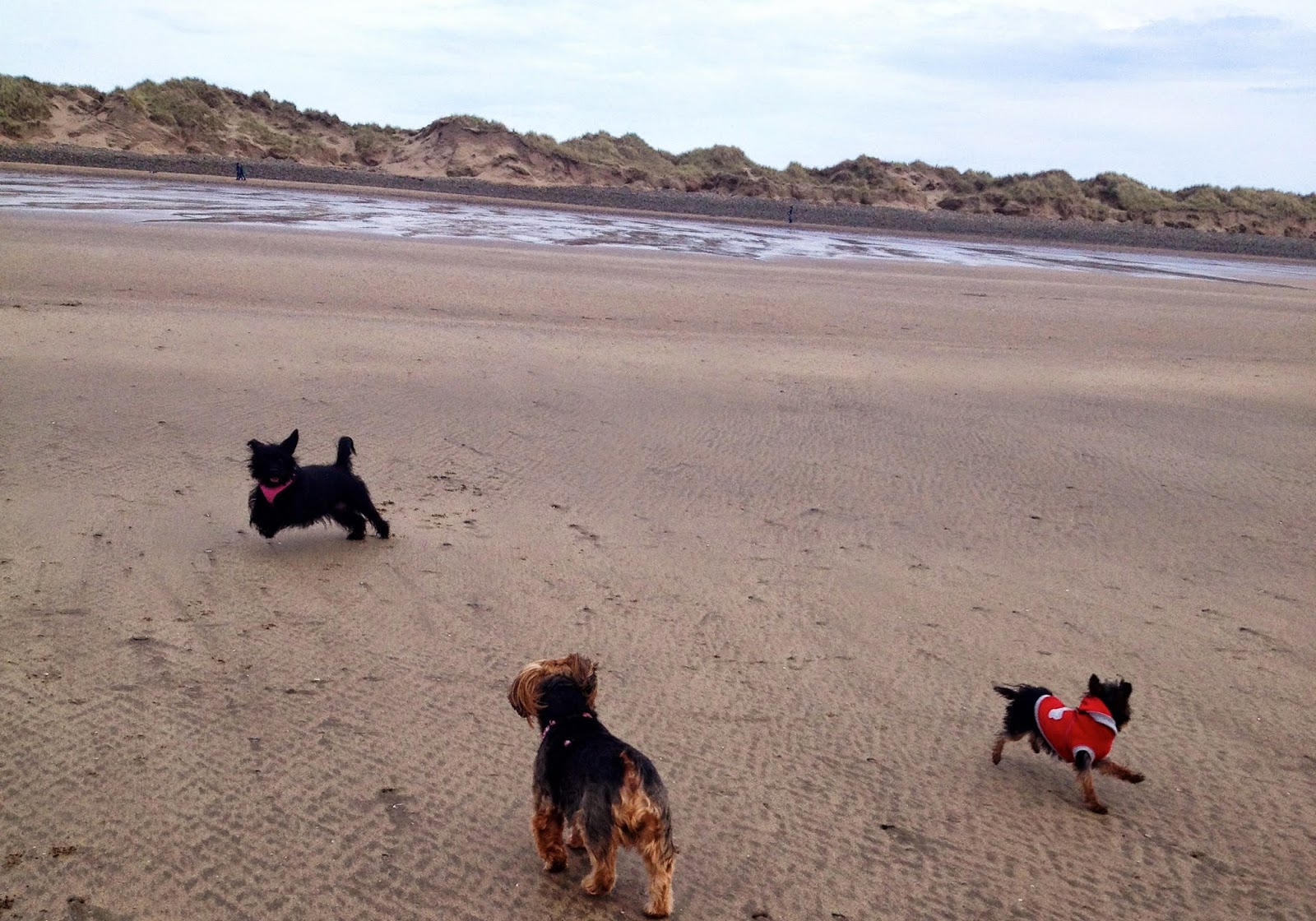 We were all very tired when we got back, and decided to keep Willow in the cottage with us for our last night (rebels!)! We had considered going out for dinner, but instead decided to make use of the jacuzzi in our bedroom (with chocolate from the hotel, a pink pumpkin lush bathbomb, and huge mugs of tea of course!) then snuggle up on the sofa. 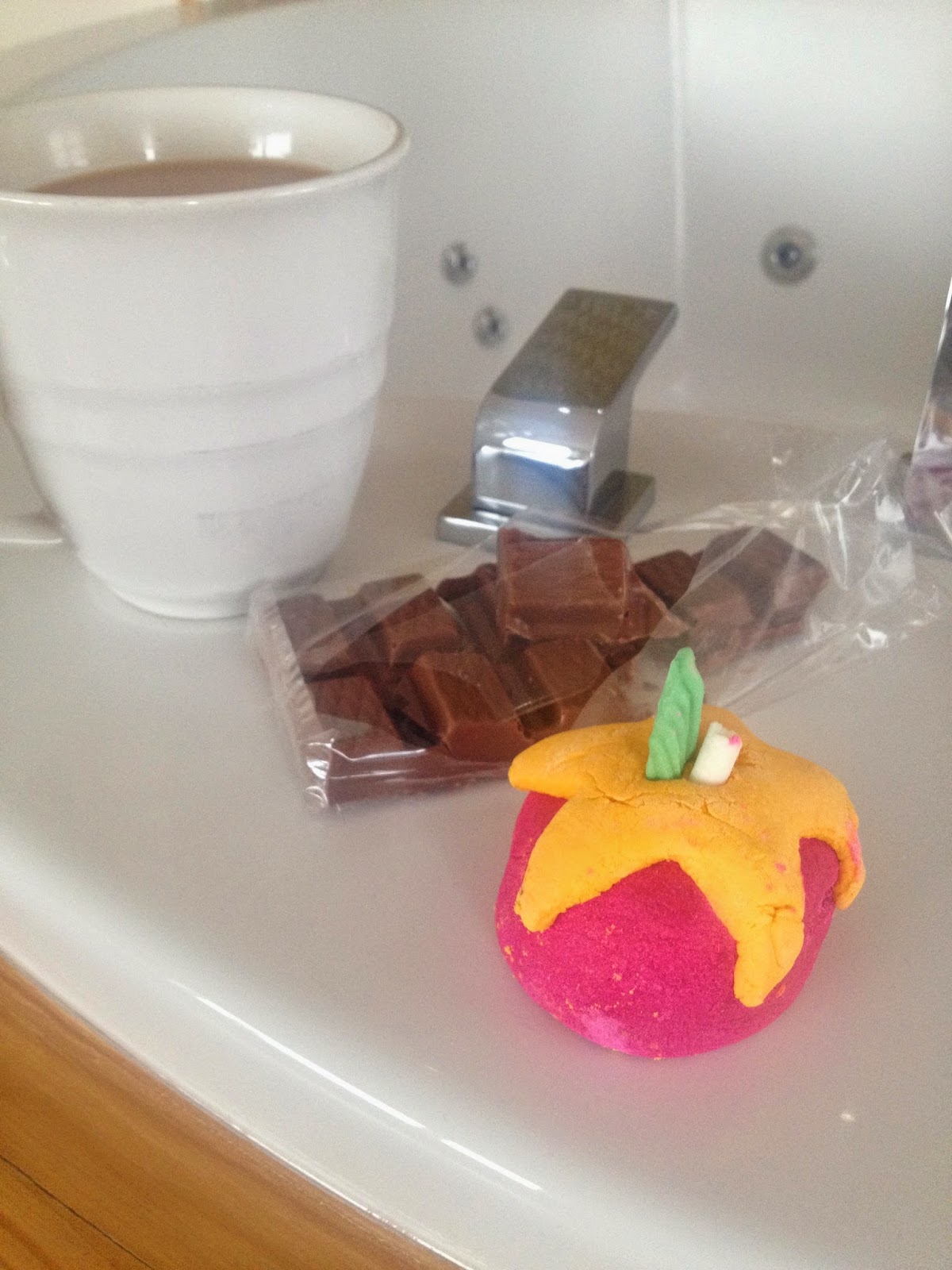 It seemed a waste to even consider going out when we were staying in such a beautiful place, and a night in together is always very welcome in our eyes. It was a perfect and romantic way to end a perfect, peaceful birthday. 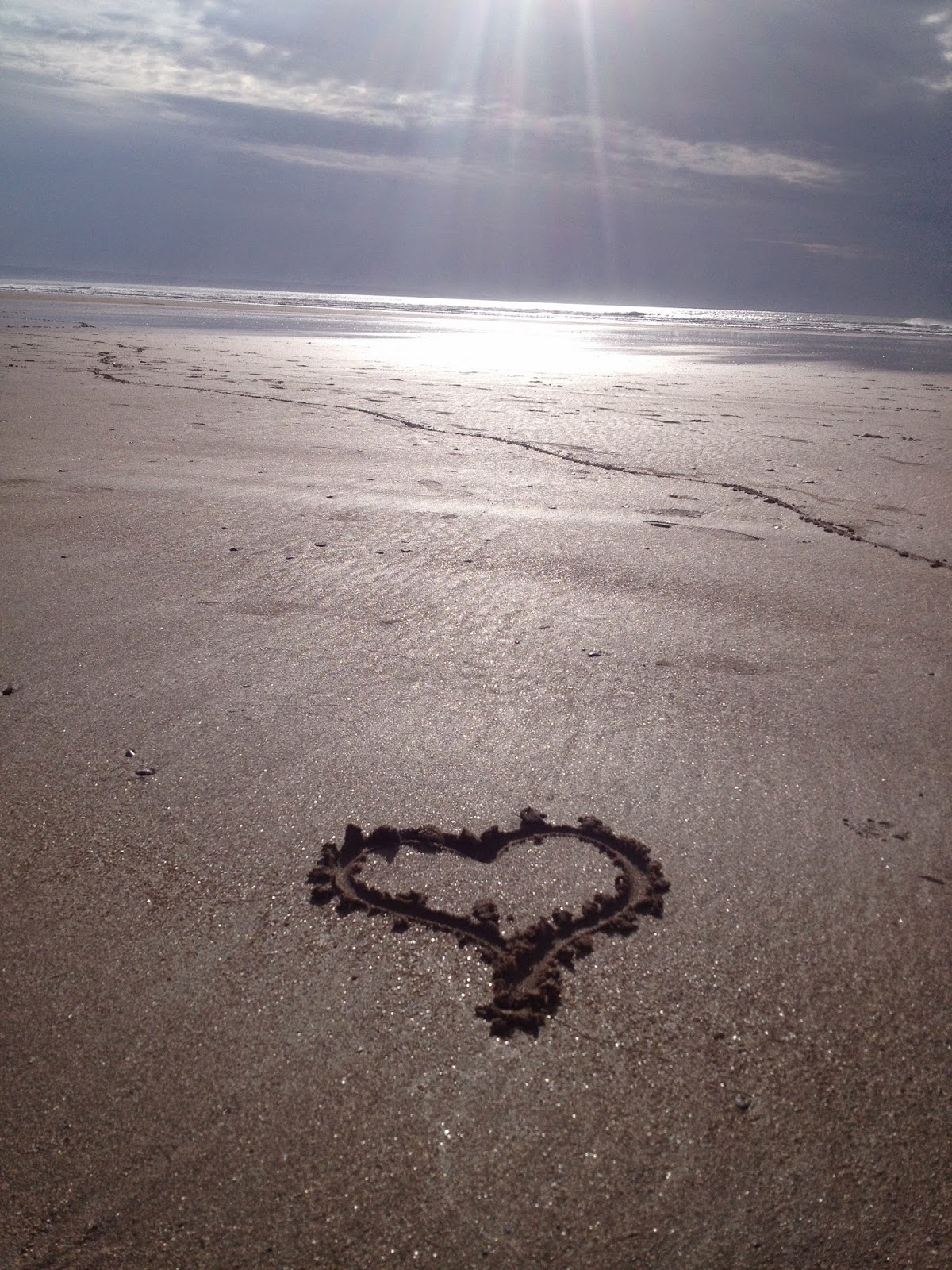 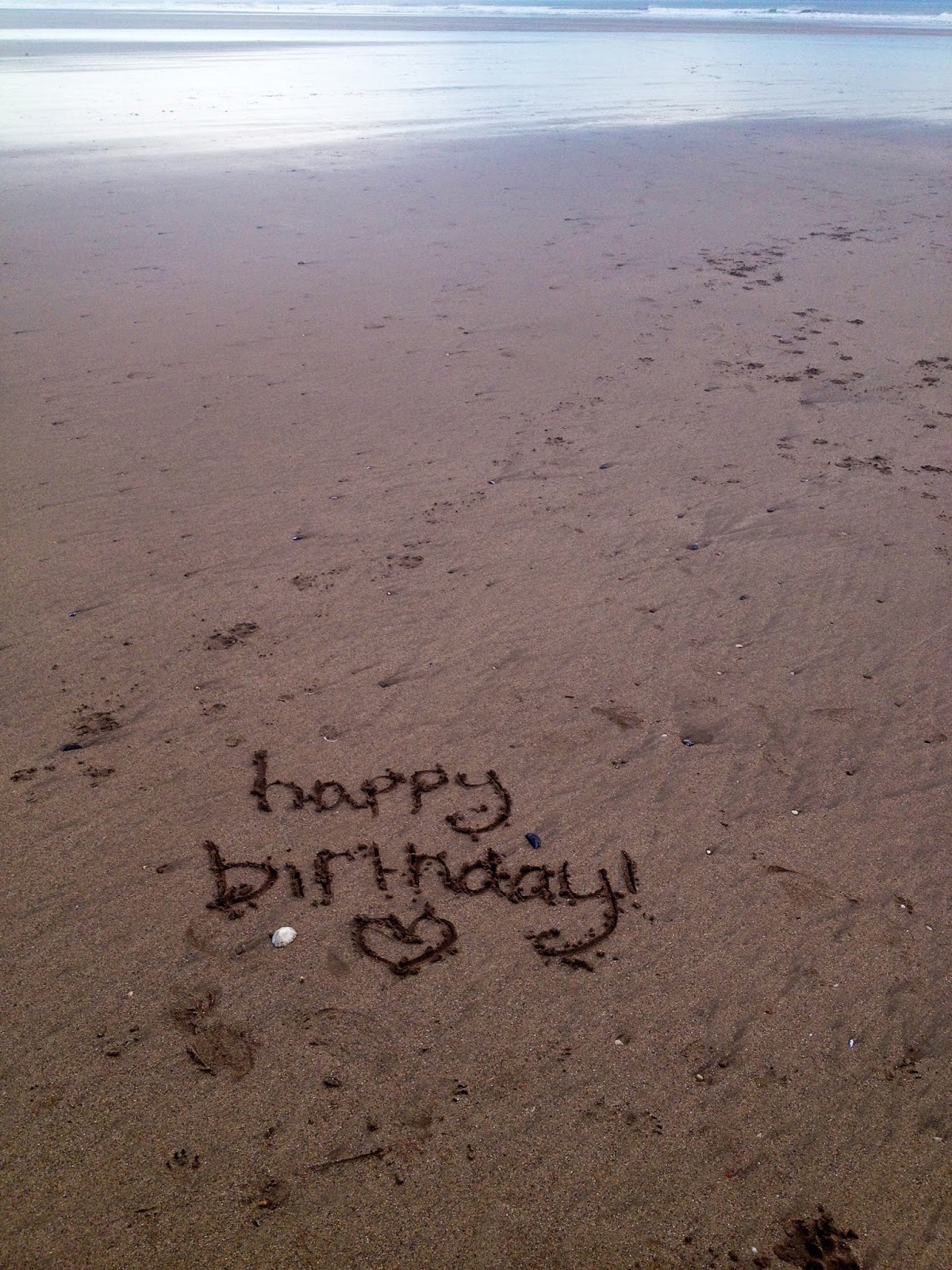 We were very sad to leave the beautiful cottage on Wednesday, although we did find time for another champagne breakfast! After a long day of driving back to Birmingham we decided to go out for dinner, to make the most of our last evening 'on holiday' before the chaos of work began again in earnest on Thursday. We visited an independent vegetarian & vegan restaurant in Digbeth, Birmingham and had such a wonderful evening. The food was absolutely amazing, you would be hard pushed to find the most carnivorous of people not be enthralled by the food, and the atmosphere was perfect too. 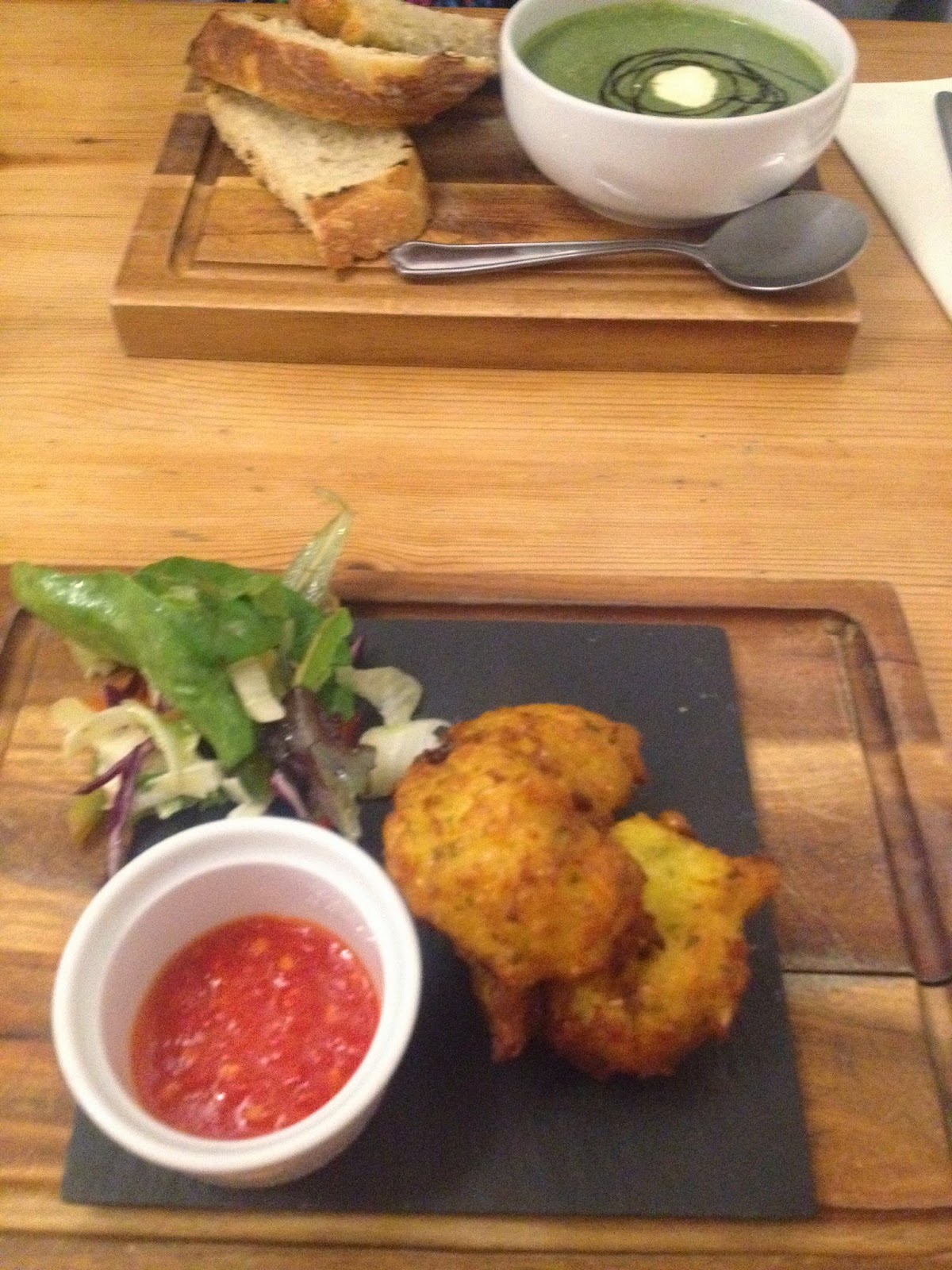 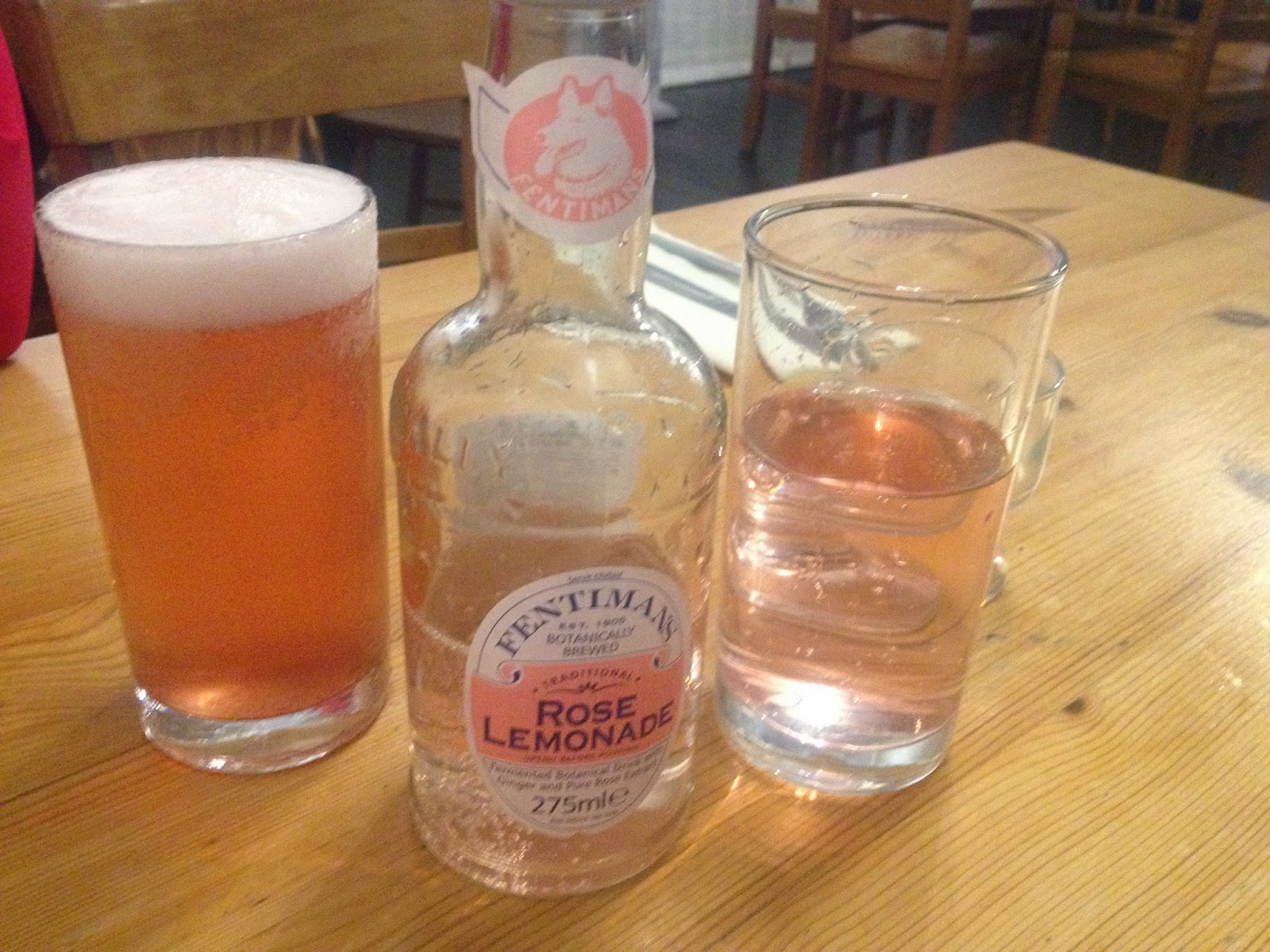 There is not a single day that goes by that we aren't both incredibly grateful for the amazing life we have, and although it doesn't happen this way without a hell of a lot of hard work, as always I am just so very proud to be able to spend this incredible life with an incredible person. Happy first birthday as my wife, I hope we celebrate many many more as Mrs & Mrs!
Posted by Lauren And Sarah