The post (and the subsequent two..) was written in August, and was, and still is, titled 'The Post We Might Never Publish'. It's content? Well, we were impatient of fertility clinic waiting times, and the idea of the very medicalised process of IVF was a bit too much, so we decided to take things into our own hands and try artificial insemination at home.

The post was written as a diary of our potential conception, and although we proved unsuccessful in trying to make our baby this way, we decided we would publish it, as it is a part of our journey to make our little one, and may prove informative for people trying the AI at home route. We also wanted a diary, and fun little pictures in case this did actually turn out to be how our baby was made.

Written by Lauren -
"27th August 2014
It's a Wednesday afternoon in August and I am holding out to wee on a stick. An ovulation stick. For the third time today.
See the thing is Sarah and I decided about a month ago that we really would love to make our baby at home, together, if we can, and avoid going down the clinic route. As we aren't using Sarah's eggs, we simply just need some sperm! We have agreed not to tell anyone, although I rather comically told my best friend as she was at our house when the UPS man delivered a rather huge, heavy object labelled "contains tissue and cells", so I explained that in fact it contained….sperm!
We explained to Willow it might contain a potential future brother or sister - much tail waging ensued. 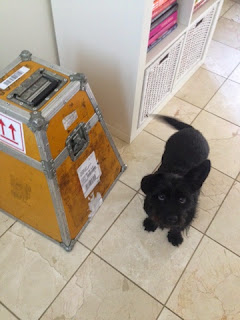 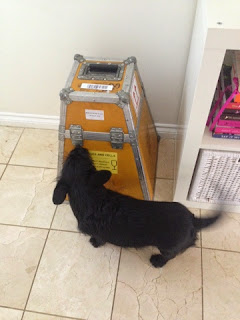 I can remember the exact moment we decided to go down this route; we were stood in the kitchen one Tuesday in July, and Sarah turned to me and said "I wish there was another way for us to make a baby, I hate that we are going to have to have IVF…can't we just order the sperm off the internet?" Well they had managed to do it on If These Walls Could Talk 2! So that night, we couldn't stop giggling that we were even having this conversation, and we sat and looked in to whether you can order sperm off the internet. It is illegal in this country to have sperm shipped to your home address, you have to go through a clinic, but it is not illegal in other parts of Europe, meaning a UK based clinic wouldn't be possible…but an overseas one was! So we had a rather hilarious conversation about the kind of donor we were looking for, and there and then, ordered us some sperm! Amazingly, I was due to ovulate in 9 days time…the timing was seemingly perfect.

We also made a (short) list of what we would need….ovulation prediction kits, a pregnancy test or two, and some non latex syringes. And the following day, after work, Sarah popped in to the pharmacy to buy what we needed!

Unfortunately my ovary was a little too excited and two days later I felt the unmistakable feeling of ovulation, confirmed the following morning with a smiley face on my ovulation stick. Dammit. The sperm wasn't even being shipped for another 48 hours. A quick Google told us this would be far too late to even hope for a pregnancy. So with a very heavy heart I had to ring the cryobank and tell them what had happened and put the sperm delivery off until my next cycle. Which was four weeks away.

It's amazing how slowly four weeks can go when you are desperate to get to a certain date. Four long weeks. It has felt like months. Both of our jobs have been quite stressful, and despite our best efforts to distract ourselves, we really haven't been able to think about much else. It's so hard when all you both really want is a baby, and dealing with the unpredictability of it all makes it so much worse. But finally, fiiiinnaaaally, the days rolled around to Wednesday 20th August…"spermywormys being shipped" it said on our calendar…we are nearly there.

And here we are, a week later. I have pee'd on a stick almost twice a day every day since then, as all of the advice off Dr Google tells me that your LH surge…the thing that tells you that ovulation isn't far away... can happen at any time of the day or night, thus altering your timings of insemination, so it's best to test twice. Some times I have tested three times, cos, you know, just in case.

To be honest I am slowly driving myself a little insane. I thought the four weeks until the sperm came was a long wait, now each day feels a little like torture. I guess in this whole baby making process you have to just be able to let go and accept you have no control, but I have also learnt through this whole process that despite often being labelled "chilled out" by those around me - this is not the case with something to do with my body. I wish I could do something to make ovulation happen, or at least have some kind of insight in to when it might be. I wish I could just relax and 'let it happen', cos now I am also worrying that worry stops it from coming. Argh. TTC is already harder than I ever thought it would be….and we haven't really started yet! No amount of meditation, positive thinking or talking it through with my ever so patient wife makes this feeling go away. And then there's the two week wait to think about… I hope she doesn't divorce me!

Written by Sarah - "So I'm unloading the dishwasher, whilst Lauren is...erm, peeing on a stick, and I just get this feeling that this is the one. Which is silly to just know that, so I carry on unloading the dishwasher, still half expecting Lauren to shout me from upstairs to tell me this is indeed the one. She doesn't so I attempt to casually head upstairs. "How's the pink stick?" "I haven't checked it yet, it has to be three minutes". So I follow Lauren around impatiently until she does check the stick, and lo and behold…a smiley face, indicating that now is the ideal time to make a baby! 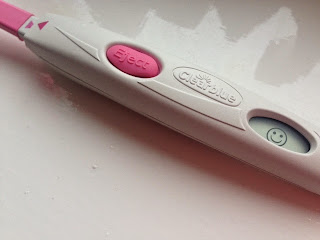 Both very excited, we then worked out when the best time to perform the insemination is. *warning - this section of the post may be tmi if you aren't interested in the home insemination process!*
this turned out to be later on that day - around midnight in fact, and the following afternoon. Home insemination requires not just precision ovulation timing, but also exact timing injecting the sperm when the egg is actually released - ie you do not want the sperm to have died by the time the egg actually travels down to the womb. We now get why many people don't bother with home insemination! It has to be timed with military precision, and is very tricky if your cycle isn't regular. Although it is cheaper than IVF, it is still expensive, with postage of the sperm alone being hundreds of pounds. The rates of success are much lower than IVF, and some people may feel uncomfortable with the insemination process - which as 'gold star' lesbians, we were a little at first!

28th August 2014
The sperm is shipped frozen in straws, in a container of liquid nitrogen, which keeps it frozen for 12 days. We ordered four straws, as you need two per insemination. 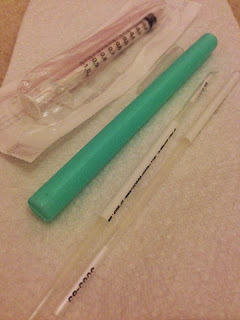 The straws need to be taken out whilst wearing latex gloves to prevent frostbite, then left to defrost for 10 minutes, before being put into the syringe. We read the instructions on how to remove, defrost, and empty the straws numerous times! The first time I was quite nervous, and my hands were quite shaky whilst removing the straws from the tank. I luckily only got a very light burn from the nitrogen which subsided after a couple of minutes. 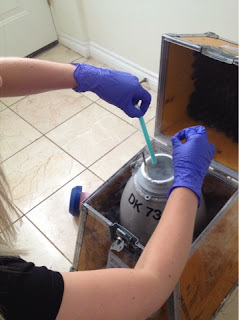 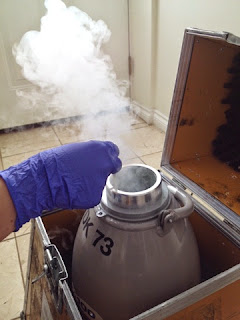 Lauren emptied the straws as she is used to dealing with syringes at work and I was worried I'd mess it up! The first insemination, as odd, and slightly gross as this may sound, was fun! Whether this works or not, we tried - and it was a lovely, close experience, which will be wonderful if it resulted in us having a baby. We were much more relaxed the second time (the following day), especially as we weren't worrying about cutting the wrong end of the straw or how the syringe worked etc.

And now we have the Two Week Wait, until we can take a pregnancy test. This coincidentally falls on 11th September, which will be exactly ten years since we met each other. We have read many, many stories about how horrendous and torturous the two week wait is, but we aren't feeling that. We aren't expecting this to have worked - after seeing how clinical and scientific and precise IVF clinics are, we don't really think we could get the same result ourselves in our bedroom! We have an IVF appointment on 2nd September, about half way through our wait, which we are still attending, as if the home insemination's don't work we don't want to be put back in where we are in the IVF process.

Its hard not to analyse every twinge or stomach pain Lauren gets, and not to tell people! Our best friends know we are either thinking about, or are definitely doing home insemination, but no one else. At the moment its our surreal, exciting secret!"
Posted by Lauren And Sarah