In the build up… meditate & supplement!

A friend once told us that the IVF path was all about choosing the path of least regret. They knew as a couple that regardless of whether they cut out caffeine or not, and ate tons of avocados or not, they would accept the outcome, whether that was a positive or negative pregnancy test at the end of the two week wait. They believed that either it would work or it wouldn't, it was largely out of their hands, so they chose to just carry on as normal.

Over the past few weeks, with our IVF looming, Sarah and I have talked a lot about this, and are both in agreement that we are almost at the opposite end of the spectrum; if we didn't try everything we could to make the cycle a success, we would always be left wondering, what if?! Therefore we have made a few little changes, invested in some bigger changes, and embarked on a journey to make sure my body is absolutely at it's best. This was going to be one blog post, but it got too long, and so we have split it down in to each section!

In my first acupuncture session the therapist told me that on the whole, I am quite healthy, but that probably my biggest area to work on is that I over-think, over-analyse and worry too much. I do, it's true. I have no idea how she knew that from sticking some needles in me but she reckons that I have a stomach line that is knotted on my energy lines which means that I have lots of things to worry about. She said in order to get pregnant, by any means, you need to let some of that worry go and allow yourself some mental freedom, and your body will respond by being calm enough to allow the embryo to implant. Now either you believe all this, or you don't! We are both half sceptic / half believers, but we reckon anything that doesn't bankrupt us and isn't too difficult is worth a shot. So that brings us on to mindfulness and meditation.

In the build up to our wedding we were both working all the hours god sent, trying our best to still spend quality time together, and plan the biggest day of our lives. Talk about over-analysing, we were the queens of it. So that's when we started practising mindfulness, by the app Headspace. It takes just ten minutes each day for you to stop, do as the lovely Buddhist man on the app tells you to, and allow yourself some, well, head space. It worked hugely for us then! It meant we both started sleeping better, and our thoughts instead of being all jumbled up like a ball of wool were a bit more ordered…and we could worry less.

Over the past two years (almost) since our wedding day I have dipped in and out of using the app, and sometimes have just practised the rhythmic relaxation without the app too, and each time find myself really relaxed and ready for sleep. So now that we are on true countdown to IVF starting, I find myself wanting to practise mindfulness pretty much every day. In addition to this, Zita West (fertility specialist) has also produced a series of 3 guided meditations specifically to help people relax during IVF, after embryo transfer, and during the notoriously difficult two week wait. We haven't yet decided whether we will go for this too; it's not expensive and might work, so chances are we will, but haven't started yet.

And the final part of our baby prepping is to give my body a little boost in terms of supplements. Apparently IVF is hard work on your body, really hard. Well, we did kinda gather that! So to help it along our fertility consultant suggested we add in a few different supplements every day. I feel a bit like I rattle when I walk…when I remember to take them all… or rather when Sarah reminds me! So on the basis of advice from the consultant, and from our own reading too, I am now taking every morning:

- Folic Acid. An essential pre-natal vitamin that all women trying to get pregnant should take. It helps to prevent defects in the growing fetus like spina bifida. Therefore should be taken for around 3 months pre-conception and 3 months post, up until week 12 of pregnancy.

- Co-enzyme Q10. This one is one of the vitamins the consultant recommended - all cells are powered by tiny little organisms called mitochondria, and those mitochondria rely on Co-enzyme Q10 for power. Studies have shown that women who supplement with Co-Q10 produced better eggs, in greater quantities, as in human terms, an egg is a really huge cell, so needs lots of power to work efficiently.

- Royal Jelly. Another one that is supposed to make really good quality eggs by giving your body a boost in the energy sector.

- General multi-vitamin. There are an abundance out there. We chose one called 'Vegan' from Holland and Barrett, as it seems to cover virtually everything from Magnesium, Selenium and Vitamin C, to iron and Vitamin D, both of which I have been deficient in in the past. However I can only take this up until egg collection as it has high levels of Vitamin A which is harmful to a growing embryo / baby. 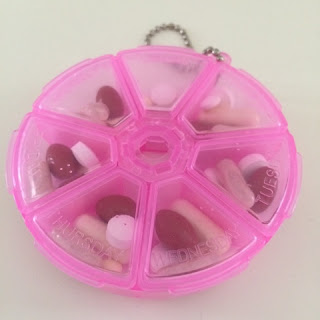 And that's that. I guess to read through the posts it may seem to others like we have done too much, and I'm sure for some people we aren't doing enough. But we have chosen the route of least regret - the route that will feel like we are giving it our all by not giving it too much, and doing the things that we won't regret not doing if we don't get pregnant after all of this.

Excitingly (well as excited as you can be about handing over anothe £1000!), we paid for our treatment last week, so it's all final! We see so many people arguing about free IVF/ivf on the nhs, or even crowd funding for it, which kind of horrifies us!
The NHS wasn't set up to pay for IVF any more than it was set up to pay for cosmetic surgery. Obviously extenuating circumstances aside, we believe if you choose to have a child, you should pay for your treatment, even if it takes a few years to save up for. But that's another story!

After our payment, we got a very exciting delivery of all our drugs! Some of which have to kept in the fridge. we have to say,  the huge pile of injections was a little daunting, and we made sure to read through our protocol (or 'baby recipe' as we call it) very carefully, ready for when we start treatment in the near future - eep! 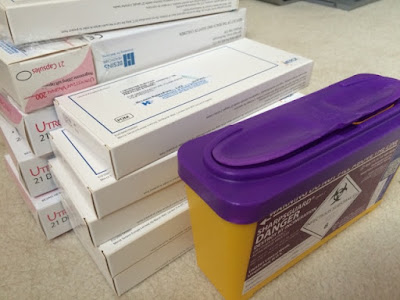