I can't believe it's been a week and a half since our wedding anniversary already - even that's gone so fast! But I was lucky enough to go on an all inclusive trip to St Lucia with work, leaving Lauren and Willow behind to enjoy some mummy and bear time (and work lots, unfortunately!), so it's taken a while for us to write about our wonderful weekend.

Waking early on Saturday 4th July, our lovely family had given us lots of presents so we opened them in bed - some had gone with bed linen and towels for the 'cotton' theme but we also had lots of cotton scented candles and other house gifts. So sweet and thoughtful! It's lovely for us that people still describe our wedding day as one of the best days of their lives - it was absolutely the best day of ours!
We also opened cards from each other: 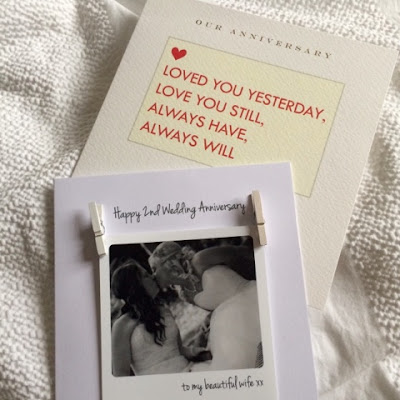 The decision about what to do on our wedding anniversary seemed to take some deliberating! We really couldn't decide what to do - we love travelling, so the chance to spend it abroad was very tempting. But we had not long gotten back from Malta, and I was leaving for St Lucia on the Monday, so this didn't seem to work even for a short haul weekend trip.

Next we debated various locations around the UK - the Cotswold's have been a favourite destination of ours for years, Leeds was an option (to re-visit the place we lived in the early years of our relationship) and Wales is another place we have visited a lot over the years - always so peaceful.
Then we considered somewhere completely new - Oxford, Lake District and Edinburgh were all discussed.

Eventually we decided to spend our wedding anniversary doing something we have wanted to do for a loooong while - a tour of all the vegan eateries in London we have been planning to go to 'one day'. We were tempted to go back to old favourites in our gorgeous capital city, but as there are so many places we never get round to visiting, we thought we would change that.
The final plan was to spend part of the weekend stopping off at places on our list, and part going for a nice meal and staying in a lovely hotel.

We are lucky that we are only a 75minutes train journey from London, so after boarding bright and early, we had coffee and read lots of 'happy anniversary' messages from friends and family. 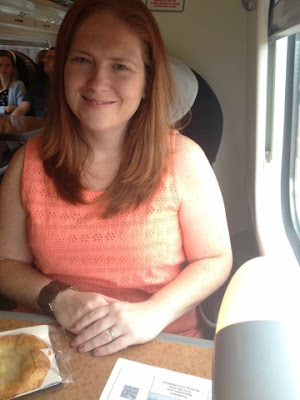 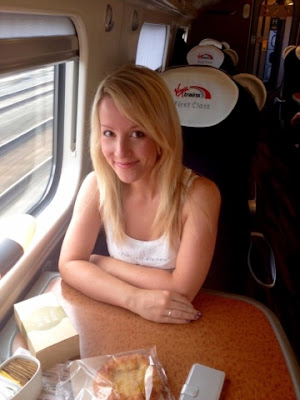 Our first stop was aptly the place we went on a date on our first ever visit to London, back in 2005, Neals Yard in Covent Garden is tucked away, hidden if you don't know it's there, and beautiful.
We were delighted to see it was still exactly the same ten years later, and  the place we spent a very much remembered and loved date, Wild Food Cafe, was still there too. 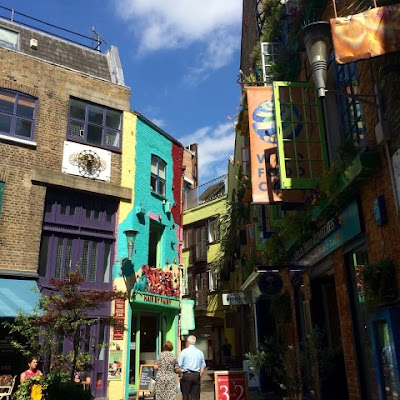 Hungry for breakfast, we ordered porridge bowls from new pop up shop 26 Grains - it was recommended by vegan food blogger Deliciously Ella and we definitely weren't disappointed - yum!
Beautiful ingredients and the chance to sit and eat in the sunshine - we can't wait to go back! 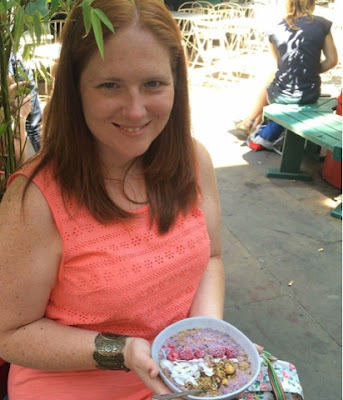 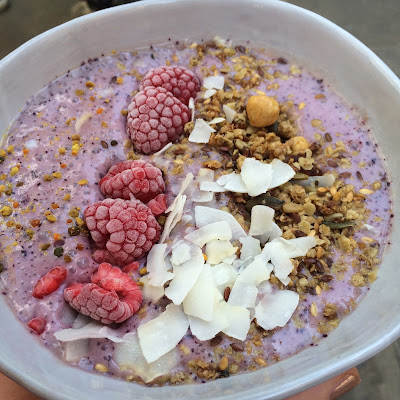 After a quick tube hop our second stop was Borough Market. We had lots of fun holding hand wandering past brightly coloured fruit and veg stalls, and stopping for juices and vegan chocolate dipped strawberries.

We took some pictures and took in the sights and smells coming from the varied stalls.
We had perhaps expected a little more from the famous market however, so after a stroll around in the (hot) sunshine, we got the tube to our next destination. Our next stop was Regent's Street, which was closed to traffic and filled with street entertainers for the day. London always seems to have something interesting and fun going on, and the summer garden party that overtook Regent's Street for the day was no exception. Each couple of feet were a different band/performer/exhibition, with deck chairs along the road for people to sit in the sun and enjoy the carnival atmosphere.

Reaching the end of the road, we went for lunch at Tibits, which was recommended by a colleague. A veggie/vegan buffet, you fill up your plate and are then charged by weight. It was very busy which showed it's popularity, but we loved it so much we came back the next day and had lunch there again! 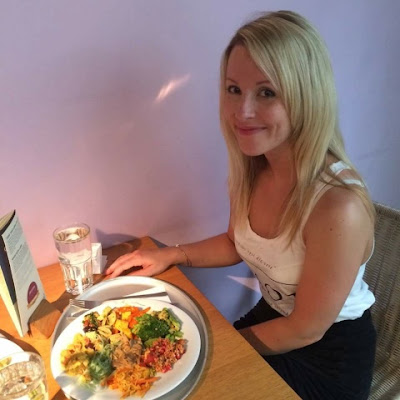 Our next stop was Camden - wow it was busy! Sarah likes the more alternative part of Camden but as the streets were so packed we didn't walk down that far. We did however find the vegan bakery we have been wanting to try for months, and settled on this beauty - one peanut butter donut, one jam donut, topped with vanilla ice cream and chocolate sauce. It was meant to be a sandwich but kind of collapsed - luckily it was devoured quickly! 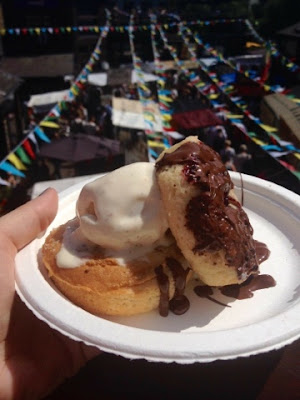 We had fun people watching and sitting by the Lock, then decided as it was 3pm, to go and check into our hotel.

The hotel we had chosen based on its reputation for 5 star luxury, being very central, and providing the right mix of modern and pretty - very much to our taste.
The lobby was so beautiful, and the receptionist was very excited when we told him it was our anniversary, and insisted on taking our picture! 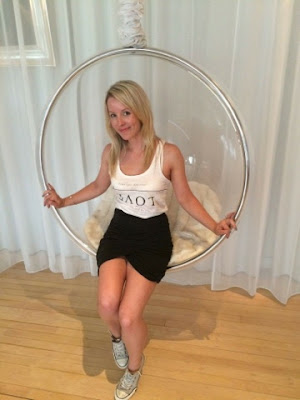 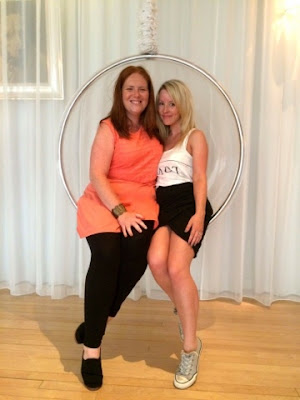 After much needed showers (London was HOT that day!) we got ready to go out for our anniversary dinner. We still love getting dressed up and going out for a good old fashioned date! 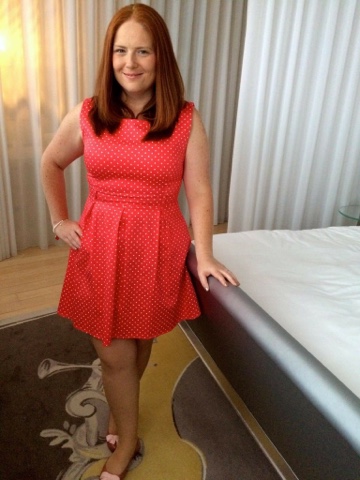 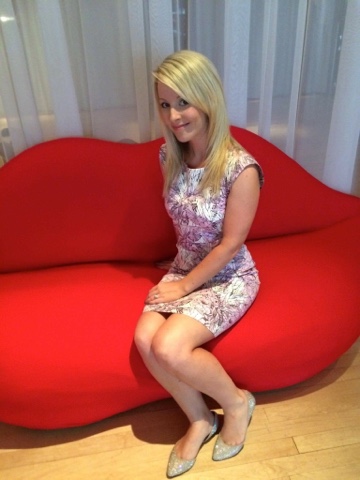 Our dinner was at Vanilla Blacks, a Michelin recommended vegetarian restaurant. The staff was so lovely and friendly, and the restaurant had a great atmosphere. We were impressed they had not only a separate vegan menu but also a vegan wine menu.

Our food was good, but unfortunately not the best vegetarian/vegan food we've ever had. The idea of fine dining is tiny portions of flavour packed, adventurous combinations of food, but we felt the dishes could have been more imaginative, and that the starters and mains had a lot of similar ingredients.
We did love dessert however! 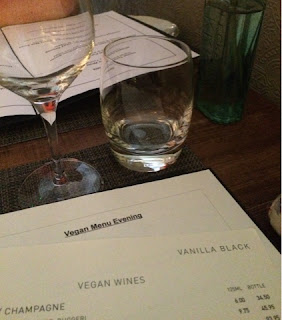 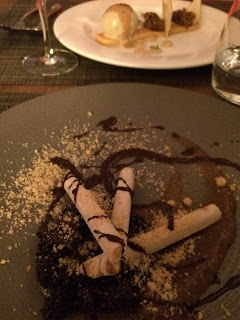 After a lovely evening of food and conversation, we headed back to the residents bar at the hotel. Decorated in deep purple with lots of mirrors, low lighting and candles, we found a table and ordered cocktails. 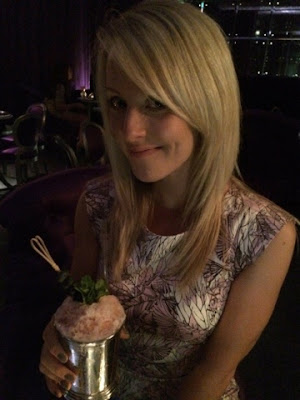 After our first round of cocktails we were a little stuck on what to order, so asked the barman for something 'sweet and girly'. We chatted to him for a while after telling him it was our wedding anniversary, and he offered to make us a creation just for us! It was delicious and SO pretty. Although expensive we loved the atmosphere of the bar, and were there for hours enjoying each others company (and the delicious drinks!) until retiring to bed about 1am. 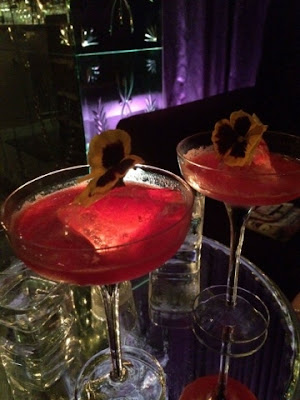 The following morning  after lots of lazy Sunday cuddles, we had a delicious breakfast in the hotel, before very sadly checking out of our beautiful hotel - we would've stayed for a month!
Our main plan for the day was visiting the Just V vegan food fair in Kensington, for which we were kindly given free tickets. The fair was full of vegan, gluten free, and other allergy specific food, with food demo's and taster sessions. Lets just say we shopped til we dropped! 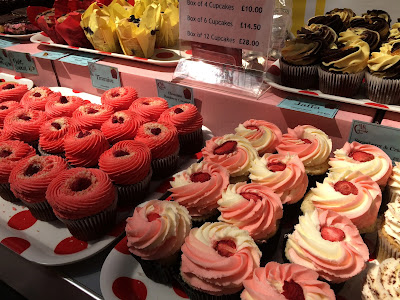 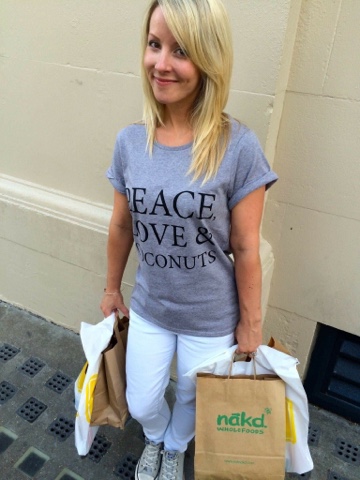 After a stop off at Starbucks (ok so we've been there before, err maybe a few times, but it was vegan at least!), and another lunch at Tibits,  we called into a vegan store we had heard good things about. Although the shop looked cool, it didn't have much stock, or things we hadn't seen before. We bought some chocolate though, and decided it was time to get our train back to Birmingham. 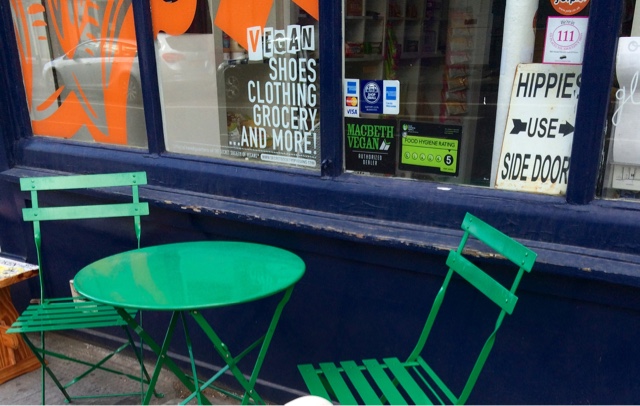 People have told us our relationship is one of a kind,  that we are lucky to love each other the way that we do, and that the strength we have as a couple is admirable.

I think that's true, we are very lucky - to have found our soulmate and best friend in the same person. Exploring life, and enjoying the thing's that we love the most, make us so happy, but we get to do that with our favourite person in the world. I can't wait for another 102 years of adventures - happy anniversary sweetheart! 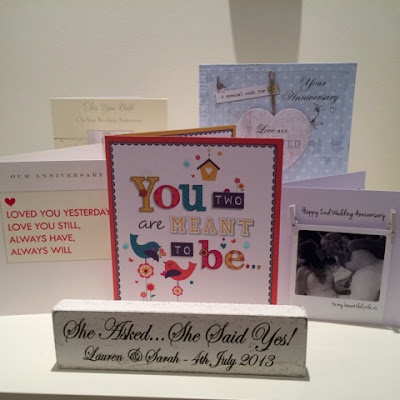