As we mentioned in our last post, we are getting very close to be able to restart our IVF treatment. The thing with IVF is that waits can be unexpected - you feel like you are full steam ahead, only to hit an unseen obstacle. When you have been so on track, an unexpected wait can seem like a lifetime. IVF is so nerve wracking, with such huge results - either the devastation of no pregnancy, after going through so much financially, physically and emotionally, or the news that you are going to become a parent in a few months! This can bring on a desperation to know what will happen - will it work or won't it!? So it can be difficult to be able to focus on anything else. We feared this would be the case when we both had a week off work, and therefore nothing to distract us! However, we don't want to wish time away, so tried to fit lots of nice things into our week.

This is a little photo diary of what could be one of our last weeks off work together without a bump or a baby!

One treat was lunch at a local vegetarian cafe - it's one of the first places we started visiting for dates when we moved to the area five years ago. It has homely memories for us, and makes Sarah's favourite soy chai lattes to perfection! It's great to try new food places, but sometimes it's lovely to go back to an old comfy favourite. 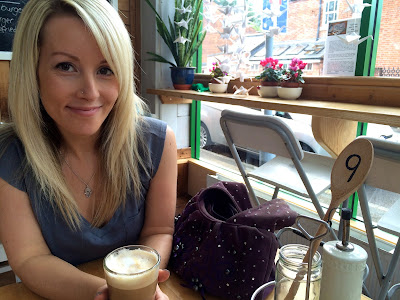 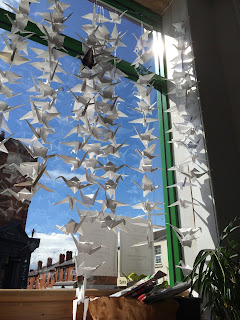 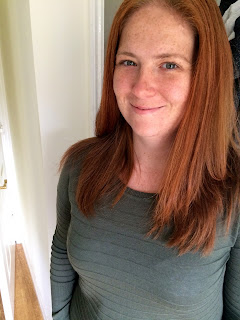 The 27th August was National Burger Day! We didn't have much choice from Birmingham's restaurants, with beef in a donut, foie gras burgers and other beef creations topped with lots of bacon and cheese just some of the offerings! So we decided to stay at home and create our own version. This is our vegan onion ring-avocado-BBQ-bacon-cheeseburger! Topped with extra onion rings and served with sweet potato fries. They were huge, we only just about finished them! 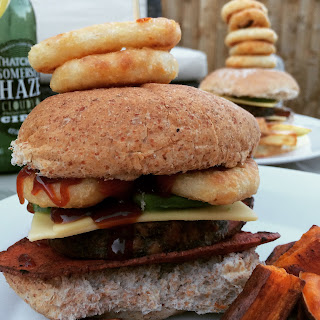 On Tuesday we had a night out - this isn't something we do often as we aren't big drinkers, but decided going out for a meal and some cocktails is something we'll do a lot less when babies arrive. 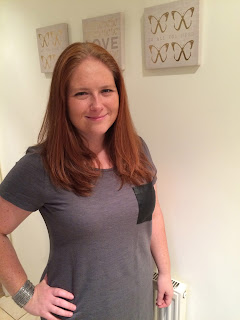 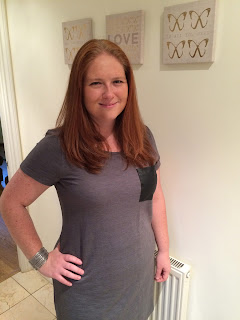 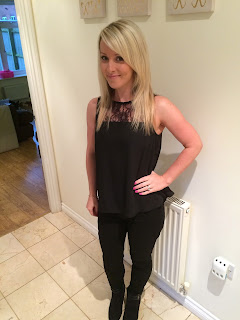 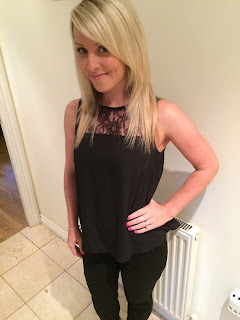 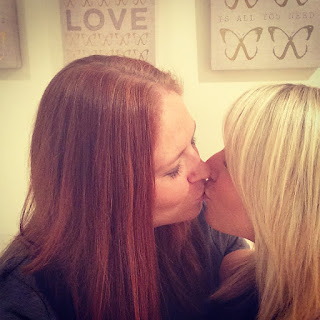 We started off with cocktails, with Lauren going for rose sangria, and Sarah choosing a rum, elderflower and jasmine creation. Yum! 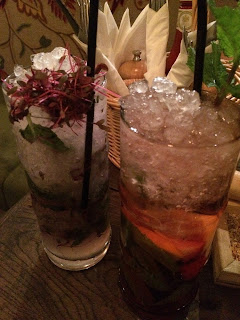 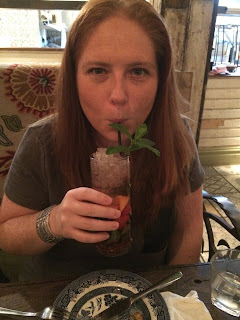 Our food was delicious - this deli board is made up of herbed three bean salad, olives, flat bread, mint & pomegranate cous cous and the most garlicky houmous we've ever tasted - good job we both ate it or it might not have been the most romantic evening! 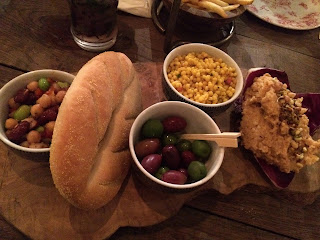 We finished the night with more cocktails, this time going for cherry blossom martinis - we expected them to be sweet and delicate but the strong rosemary made them very unusual. 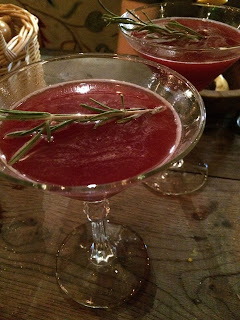 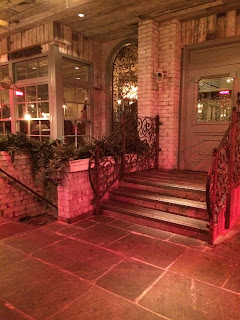 Wednesday, our plans were to start buying early Christmas presents for family! However we completely failed at this, and ended up getting some Christmas presents for Lauren, and a birthday present for Sarah! We then went out for a Chinese for dinner - we visited a Chinese that had lots of vegan mock-meat, so it was a novelty to order duck pancakes, lemon chicken, and beef in black bean sauce!
Veganism is trendy at the moment and it seems there's a lot of people casually using the term with little or no intention of actually adopting a vegan lifestyle, which is a shame. Having both being vegetarian since we were about ten, we originally went vegan around nine/ten years ago, during the first year we lived together in 2006. This was entirely based on animal cruelty reasons - at the time Sarah ran animal rights street stalls in Birmingham city centre with her friend. The friend set up Birmingham vegan group and definitely influenced our decision to become vegan. He used to get irritated at people coming up to see what we were about, obliviously putting their bag of McDonald's down on our table whilst they chatted to us! There really was hugely less to offer in terms of vegan food back then, so it was much more difficult - the vegans we knew were all male friends who couldn't cook, and constantly complained about how hard veganism was! So when we moved back in with our parents a few years later, we slowly became just vegetarian again. A couple of years ago, we started to reintroduce veganism, and are pleased to find there is so much more choice now. 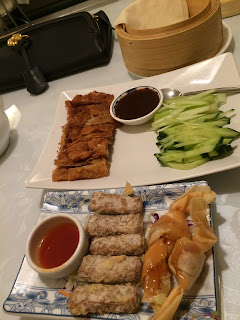 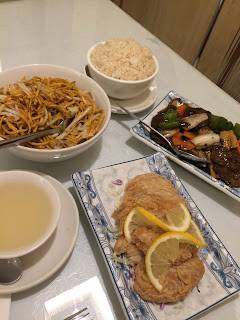 On Thursday we decided to find an activity that didn't involve food! So we revisited the spa we had spent our hen party at a few years ago, for a day of relaxation. 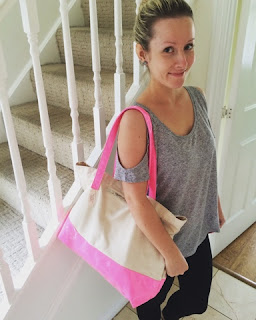 We spent the day swimming, relaxing in the steam room and meditation pods, and enjoying a couples rassoul mud treatment. A no-therapist treatment, it involves applying different coloured mud to different areas of your partner, then relaxing in a steam room to let the mud work, and rinsing each other off under a rain shower. We had this treatment when we visited the spa on our 9th anniversary and really enjoyed it - its relaxing, romantic and fun all at the same time!

Friday was back to food! The weather had seemed extremely autumnal, with Pumpkin Spice Lattes out in the shops, and a definite chill in the air! We love pumpkin flavours during autumn, so we decided to make some pumpkin treats of our own!  We make pumpkin spice mix that we can add to lattes - a mix of cinnamon, ginger, cloves, all spice and nutmeg. There are recipes that use actual pumpkin puree, but this seemed like a lot of effort in the morning, so we figured a tub of spice mix would be a lot easier!
We also made pumpkin spice rice crispie treats - wow, that was a lot of butter and marshmallows! 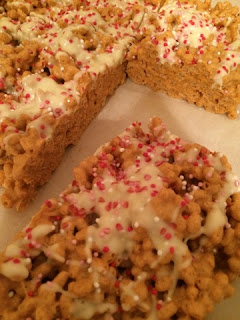 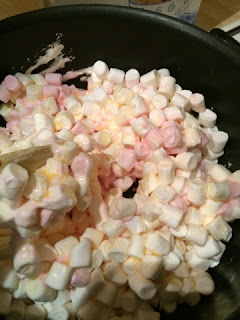 On Sunday we ended our week doing one of our favourite ways to relax - going out for breakfast. Most people think of a food date as dinner, but breakfast seems really romantic - most people are at work or still in bed, and its such a nice way to start the day together. We had soy lattes and herb flavoured mushrooms with sourdough - delicious. 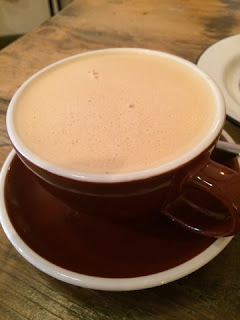 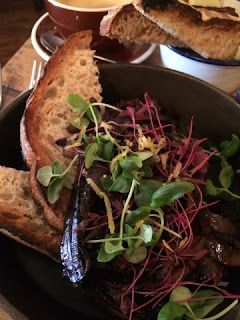 By the time we got home from breakfast, the weather had significantly improved from earlier in the week! English weather is so strange, we went from having the heating on and thinking about Christmas, to changing into shorts and spending the day sunbathing! Very odd that we got suntans in September in England, but it was so nice to relax under hot sunshine and blue skies. Definitely a day we are glad we finally stopped being lazy and sorted our garden out! (makeover post here in case you fancy a nosey!) 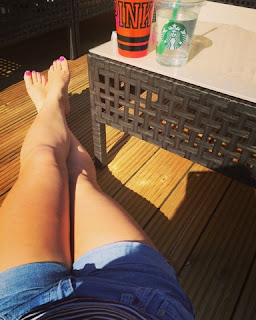 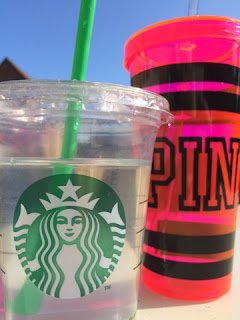 Making the most of our last day off, we stayed outside until sunset, especially as Willow enjoyed being outside with our friends Bolognese Terrier! Don't they make a sweet couple?! 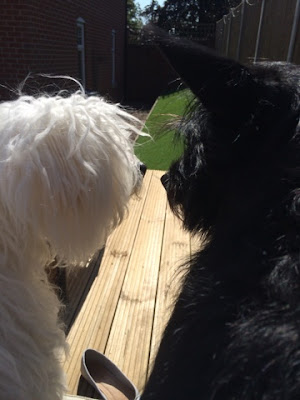 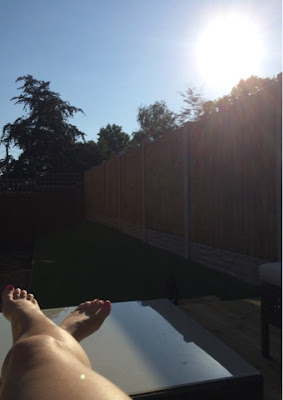 And all too soon, the week was over! Sarah spent week last working in Solihull, back in the branch of her job she worked at a few years ago, before she begins a job working in her companys new space in a brand new shopping centre in Birmingham. She has a few days off until then, so is definitely going to miss this time of chilling out! Lauren has also begun providing childcare for our two year old neice on Thursdays (we look forward to her mum returning the favour in a few years time!).

We hope that when we become parents we still find time to relax, enjoy each others company, and to go on dates, but we are aware those things will become rare luxuries! Hopefully we can look back at this post and be inspired to make the effort to go out for breakfast - hopefully accesoried with a baby sling :)