Symptoms: This week has been all about one thing - morning sickness!

Cravings: Tuna sandwiches. Unfortunately I am a vegetarian, and in addition to this pregnant women shouldn't really eat tuna, so I have had to resist!

Our baby is: developing facial features, including the inner ear, and lenses of the eye

Our baby is the size of: a blueberry 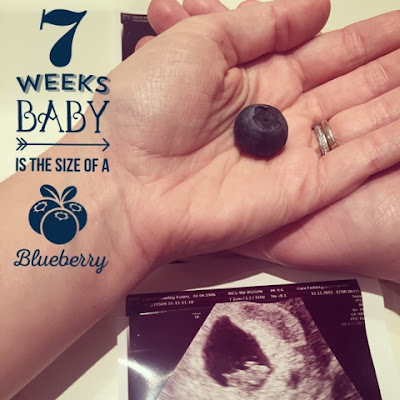 After the crazy rollercoaster of week 6 we are very pleased to report a much, much calmer week in the land of baby growing! This week has been all about one thing - navigating the ups and down of that wonderful little thing called morning sickness.

At 5 weeks and 6 day pregnant I experienced my first waves of nausea. It was just a gentle "I feel sick" kinda feeling that ebbed and flowed throughout the day but was definitely there. Secretly I was over the moon to have joined the nausea club, as it meant that I could finally begin to 'feel' pregnant. The nausea was pretty easy to deal with over the next few days and I was really pleased that I was one of the lucky ones that was just going to experience nausea and not any actual sickness.

6 weeks and 4 days - having eaten breakfast and played with Willow and her little friend Sierra who was staying with us, I felt suddenly much more sick and needed to go and lie on the sofa until it passed. Except it didn't pass, and instead I rushed to the bathroom. Actual sickness had begun. From that point onwards it has felt pretty much 100% of the time like someone has stirred up my tummy with a wooden spoon. The nausea still ebbs and flows, but it is now about ten times stronger than it was in the early days.

The sickness, for me, has no rhyme or reason to it. Some days I am absolutely fine and just feel sick, and other days I can't move far from the bathroom. We have read and read about what is supposed to help, and have pretty much tried them all over the past week or so, including:
So I guess there is little we can do but ride it out. Although I have to confess, even on the really grim days, on the days that I think the whole of my insides may land in to the toilet bowl, I feel so very lucky. We are so bloody lucky that this is happening to us, that we get to experience this crazy rollercoaster, together. I wouldn't swap the sickness for all the tea in china. Except tea is on the banned list too!

In terms of what what actually 'did' this week - well, not a lot! Sarah has started her incredible new job, which is vastly like her old job, in the same place, with the same company, but with more hours and more responsibility. I'm so proud of her. Even though I see her less - she is working so hard to ensure she can look after us all, and I'm so proud of her.

On Sunday we had a lovely day off together, catching up on TV shows we've missed, walking Willow through the glorious autumn scenery that surrounds our house, Sarah cooking an amazing Sunday dinner, followed by an equally amazing apple pie (vegan, of course, served with vegan custard!). It was the only thing that for the whole day I kept down - we'll be having more of that! It was a much needed chance to relax before the next hectic week began. 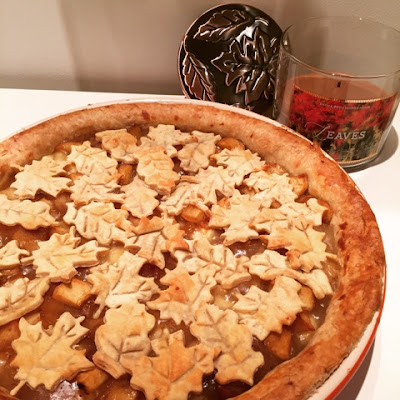 And then finally, today, the day we have been waiting for since we rang to tell the fertility clinic about our positive test - our first official scan! You are given a scan date for approximately 8 weeks pregnant when you have had any kind of fertility treatment through a clinic. A lot of people call it the 'heartbeat' scan, as it is often the first peek inside to check there is a heartbeat (and how many, if more than one embryo was transferred). So made the fairly long drive to the clinic, for the last time until we decide to make baby number 2, and waited patiently for our scan.

Sarah could see the screen as she was sat beside me holding my hand, but due to the angle I couldn't. She told me afterwards that she saw our baby straight away, but thought she mustn't be looking at the right thing as it looked much bigger than she thought it would! The sonographer was silent as she looked at the images on the screen, and then finally turned the screen towards us and said "there is your baby". 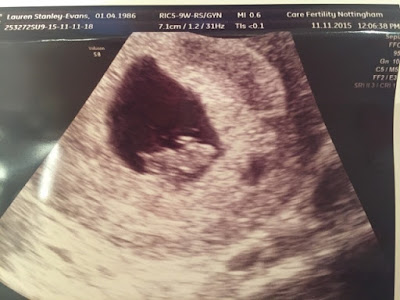 We cried. A lot. Held hands and cried. She pointed out the heartbeat, which was clear and beating beautifully, and then the head, body, and tiny little arms and legs. Our tiny baby was moving around, and moving it's tiny little arms, and looked so much bigger and more developed than the tiny dot we were both anticipating! What a magical, special moment. I think we both fell in love!

Such a wonderful, special afternoon - we both feel like this lovely little milestone means any worries are eradicated, and we can start enjoying this wonderful time!