Symptoms: the good old morning sickness continues! And coupled with excruciating tiredness, this week has been rough!

Cravings: none to speak of really, it's just a case of eating what I can, when I can!

Our baby is: developing eyelids, fingers and toes!

Our baby is the size of: a raspberry 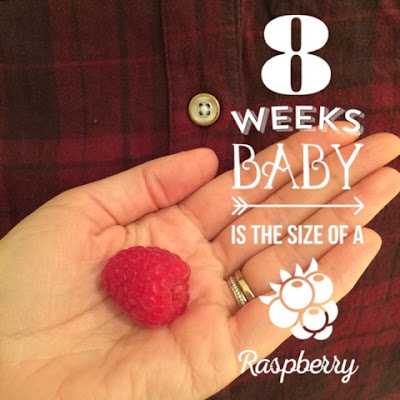 Physically, this week has been quite tough. I wouldn't change it for the absolute world, we are just so very lucky to be experiencing this, but at the same time, it can hard to keep smiling when you are violently throwing up everything you've eaten that day, are so exhausted you could sleep for 20 hours of the day, and your boobs hurt. So this is what early pregnancy feels like! But in a funny kind of way, we both also feel like we have turned a corner this week. Early pregnancy is fraught with worry - you naively imagine, whilst trying to conceive, that the moment you see those two precious little lines, all of your worries and fears will disappear. In fact, they only worsen, because you dream of this moment for so long, and then the reality is that in an instant, it could all be taken away again.

Neither of us have felt fear or despair like the time that I was bleeding and was told I was likely to have miscarried. In that moment I felt foolish for ever believing in our happy ending, and felt certain that I could never put myself or my wife through that heartache ever again. In my head I was already planning when we would begin the adoption route. And then just like that, we were told all was OK - baby was alive and well in there. The relief was overwhelming and vast, neither of us could believe our luck. But the next couple of weeks were full of suspense. I would constantly run to the loo to check for blood, and every little twinge in my tummy left me wondering if this was the day I'd lose our much loved, longed for and dreamt of baby.

Our scan last week was perfect. One tiny perfect wriggly baby, with gorgeous arms and legs and a beautiful beating heart. Seeing it on the screen, wriggling around and looking like a baby, was a dream come true for us both, and allowed us both to begin to believe that this might actually happen for us. The other important news was that the sonographer was able to tell us where the bleeding is coming from (sadly it hasn't stopped, I still bleed daily, but now it's lots of old brown blood in varying amounts). I have a subchorionic haematoma. No, we'd never heard of it either.

The clinic likened it to a bruise - a pocket of blood inside my uterus which originally bled heavily and now is trickling the old brown stuff. No-one really knows why they happen, but they are common. They don't affect the baby but do increase the risk of miscarriage by 1%, which increases our risk from 0.5% to 1.5%. At nine weeks it would be 0.2% / 1.2%. So a tiny, tiny proportion. The clinic told us not to worry, and that by 12 weeks it should have gone altogether. But not really understanding what they had told us, we did what every normal person does in this situation and googled it!! Dr Google confirmed that it is indeed common, with reams and reams of women taking to Internet forums to share their experiences of SCH. And every single one has resolved, and had gone on to have a healthy pregnancy. And surprisingly, the vast majority had started like mine - a huge bleed of bright red blood and big clots, followed by weeks of old brown blood.

Speaking to our family and friends about the bleeding, and reading it online too, it struck us just how many people experience heavy bleeding and pain in early pregnancy, and how many of them go on to have a healthy pregnancy. And yet it's never talked about. To the vast majority of the population, bleeding + pain = miscarriage. And yet the reality is bleeding + pain = often nothing to worry about!
There are lots of campaigns at the moment aimed at getting people to open up about miscarriage. One such example is Tommy's #misCOURAGE campaign, launched only this week, to encourage people to open up about their experiences. In addition, more and more celebrities and people in the spotlight are opening up about their miscarriage experience.

But what about the other parts of early pregnancy? Everyone knows that you get morning sickness and sore boobs, why does no-one discuss how they bled so heavily they assumed they had lost their baby, and then they didn't? And if you do bleed, what do you do? Who do you ask for advice? If no-one ever talks about this aspect of pregnancy how are you supposed to know where to go next? (The answer: go to your GP, they will likely refer you to your nearest early pregnancy unit. If the bleeding is life threatening, go to A&E).

So we now know that this bleeding is probably normal, will probably never affect the pregnancy, and is due to a haematoma. Knowing this, coupled with seeing our baby on scan, has really allowed us to begin to believe that this will happen for us! We have started to discuss what we think we'll have, boy or girl, what they'll be named (we've had our names set for about 8 years!), who they'll look like, which of our personality types they'll inherit. And we even went to our very first NCT nearly new sale with my Mum and sister! The National Childbirth Trust hold nearly new sales up and down the country, where parents can sell on their used but good quality items to new and expectant parents. They are known for being full of bargain purchases and are very very busy! But having always wanted to go, and knowing my sister was going with her 2 year old daughter, we went along too. I'm afraid to say our rules of "look and get ideas but don't buy" didn't exactly pan out!! Although there were some bigger items for sale for a fraction of the price of new, all in great condition, we decided to wait until closer to the time, things such as baby bouncing chairs, play mats and toys. But we did end up buying some gorgeous cellular cot blankets, a few items of unisex clothing, some beautiful little grey booties, and a couple of things for our niece! My Mum also bought a tiny comforter for the baby, the first thing she has allowed herself to buy, because I think it's beginning to feel a bit more real for our parents.

The end of week 8 left us feeling a lot calmer, and worrying a lot less. We even went out for a couple of dinner dates on days when Lauren's morning (all day?!) sickness had subsided, and have been on lots of walks together - wrapped up warm might I add, its getting COLD! 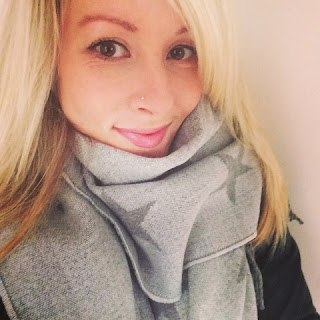 Reading and hearing about others experiences of bleeding in early pregnancy gave us so much reassurance - we hope it becomes more talked about, and information on haematomas becomes more widely available.
In the mean time…bring on week 9!