Ten weeks as a family

We haven't really written a diary style post since we registered Oskar at 6 weeks old. So we thought being in double figures as a family deserves an update!

We seem to have had quite a few milestones in the past month, one of which being Oskar's first set of injections!
We were quite apprehensive about this after being told they make babies cry 'like you've never heard them cry before, like they're in true pain' and that the medication made them quite poorly afterwards. We both went along to the appointment, and luckily had a really lovely nurse who talked us through all of the different vaccinations and really put us all at ease. Despite crying when he had the three injections and one oral medication, our boy didn't really cry any more than when he does when he has his nappy changed!

We had bought baby calpol which we gave him straight after, and he had a breastfeed immediately which seemed to solve any sadness, and then he was perfectly happy, giggling away on the car ride home! We gave him calpol two more times throughout the day and evening, and were happy that he didn't seem poorly at all.

We also had Oskar's 6 week developmental check with the health visitor and then at the doctors (although he was almost 9wks!). The health visitor is a bit useless, it has to be said, seemed surprised he is still exclusively breastfed, asked if he was smiling at us yet and if we had any concerns, weighed him and went on her way. At 8 weeks and 6 days our little dude weighed 12lb2oz and continues to follow his own curve sitting happily between the 25th and 50th centiles.
The doctor check seemed a lot more thorough though; she chatted to us about how Lauren was physically following her c section, about how we were finding motherhood, and the support we had. Lauren said was surprised about how well she felt so quickly following the section, and although she had  feared being suseptible to post natal depression due to boughts of depression when she was younger, she is so happy, as we both are. We are definitely lucky with support, what with having our family nearby and some really lovely friends.

The doctor then checked Oskar physically in addition to his responses to things. She commented on how alert and interested he seemed in things, and said it showed intelligence - we are now hoping for a baby genius! She also commented on how advanced his responses were and how strong he is - we know this from when he has kicked us before, but it was great to hear! We are extremely proud mummies. 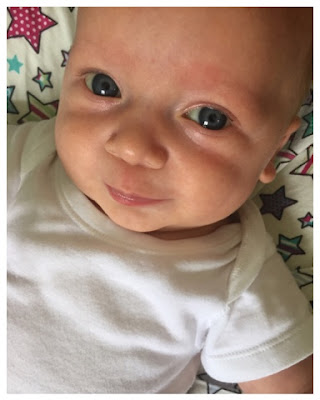 I am back to work full time, so Lauren has had to adapt to being at home with Oskar by herself during the week. At first it was a big change, but she's getting in to the swing of things now, and easily fills her days either at home or seeing family and friends. She has attended the local NCT bumps and babies breakfast club, regularly attends the breastfeeding clinic for support and advice and to chat with other mums, and has started to explore some of the baby "classes" available for the upcoming term.

Her sister has two daughters aged 4months and 3yrs and they spend a lot of time altogether. This week they decided to take the babies for a family outing to their first swim class! Oskar is a real water baby, he loves the warmth of the water and the ability to stretch out and kick his little legs, we often use a bath to calm him if he is having a difficult day, and so I was not surprised to hear that he loved swimming too. He loved gliding around in the water, splashing his hands and kicking his legs, and only got upset when it was time to get out! We want our little one to be confident in the water from an early age, and to learn to swim as soon as he is able, so taking him swimming regularly from now on will be important to us. And a great day out with his cousins! 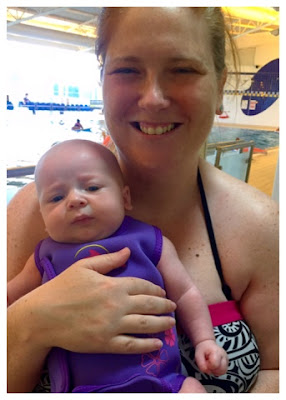 Lauren also took Oskar along to a baby massage class at a local children's centre. We weren't exactly sure if it would be a success but they both really enjoyed  it. Oskar was by far the noisiest baby in the class - squealing and chatting through the whole experience, and telling all of the other babies just how much he was enjoying it! Massage is a great bonding experience between baby and parent, as well as being relaxing for both, and a good way to relieve minor ailments such as colic and constipation! We're sure he can't wait for next weeks class! 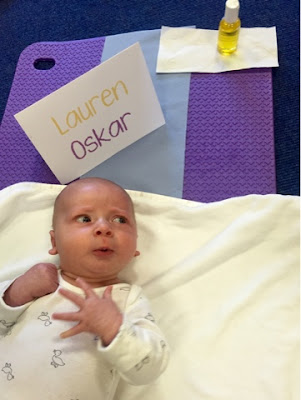 The weeks fly by. It is official that having a child speeds up time, the days till in to nights and then back to days and then all of a sudden it's the weekend again and he has turned a week older. We will continue to take a picture of him each Saturday, at least until he is one, to see how he has grown each week. It's wonderful to look at his pictures and see the differences in him that we don't see each day as we are constantly with him. 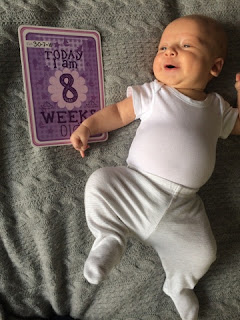 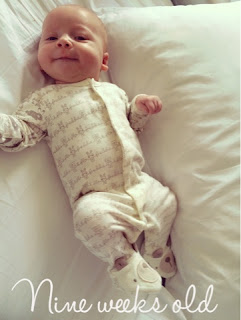 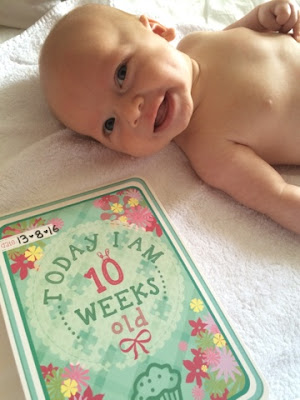 In the past few weeks he has met so many family and friends we've lost count, and accompanied us on quite a few meals out - he's quite the social butterfly! 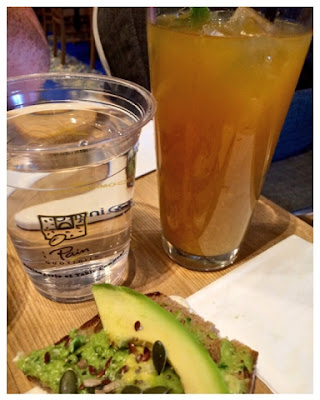 He's also becoming much more a little 'person' with a personality. He looks directly at people, his eyes follow us around the room, he shows likes and dislikes for things.

One of his favourite things is bath time! We have a baby bath that allows him to sit up, and he loves relaxing in the warm water. We add a bit of oil, wash him with baby wash, and then dry him using a Cuddle dry towel. We have to say, getting out of the bath isn't always a happy time! 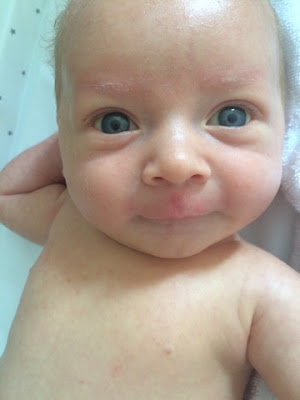 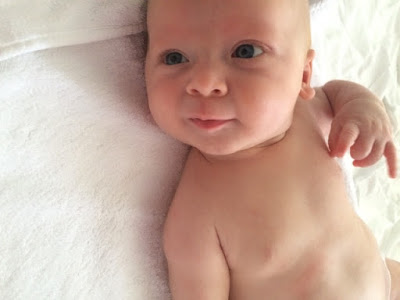 Another thing that has increased over the weeks is smiles! Oskar is such a smiley baby, and the best ones are when he sees us and his face lights up with a gorgeous big smile! He has also started to find his voice. The mornings are his happiest time (for his mummies - not so much!), and he will often wake up at 6am and wake us up by squealing with delight. He chatters, cooes and giggles a lot - it's magical and adorable and we just spend ages watching him. 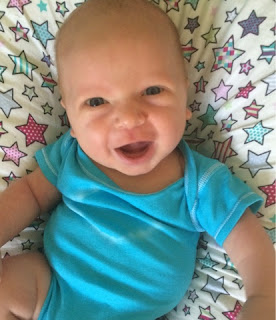 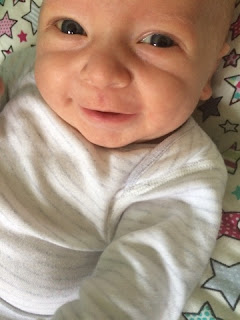 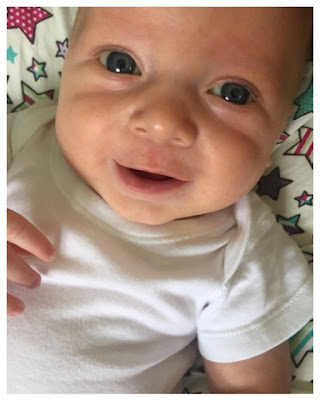 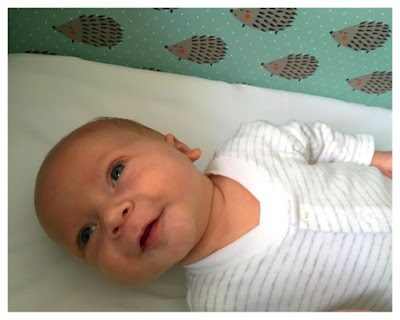 His alertness and curiosity in the world around him mean he is a lot more interested in things. If we take him for a walk around the park he wants to be up and looking around - his carriers are great for this and allow him to stare at the trees and the sky. He is also starting to notice Willow (although this a work in progress, they mainly ignore each other!) 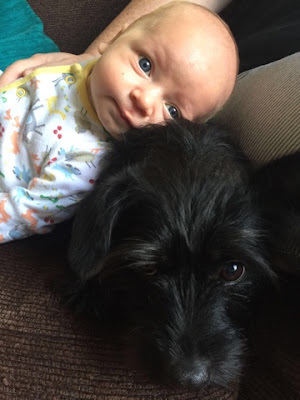 He has also started to take great delight in lying on his play mat. It makes us a bit sad to see newborns plonked on the floor on mats just so their parents don't have to hold them, Oskar was rarely out of our arms for the first 6 weeks, but Oskar is now beginning to appreciate his, looking at the toys above him and looking at bits of the mat we are crinkling or jingling! "Playing" with him has now become far more exciting for all of us, and will only continue to get better as he develops! 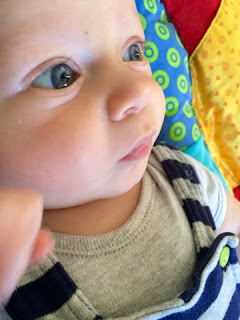 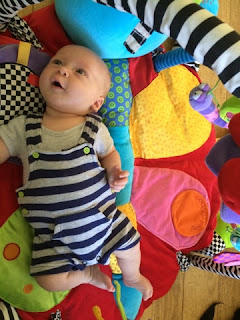 He also loves sitting in his bouncy chair - apparently the owl toy tells some pretty funny jokes! The noises that come out of him are utterly adorable. 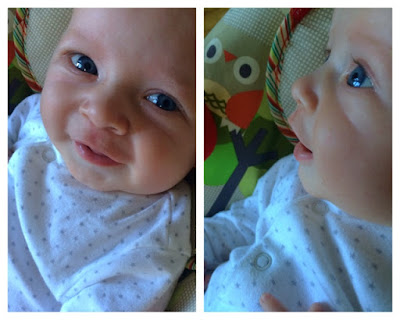 As well as baths and his owl, he loves being cuddled close and patted, his mummies talking/singing to him, his sling, ALL of the milk, and his cloud mobile. Since he was a newborn he has been fascinated by it, and now happily chatters and giggles and squeals at it until we feel that we've been watching him lie on his changing mat for long enough! 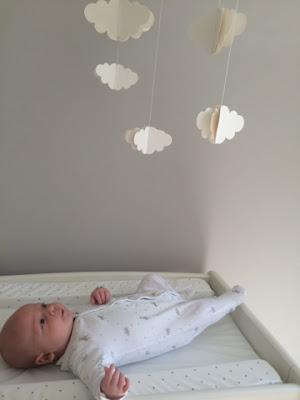 We also took Oskar on his first proper trip to the park, where we spent the day exploring, walking with Willow, and stopping for regular food breaks (for the boob monster!). I carried him in his ergo most of the time, he loved staring up at the trees, and was fast asleep by the time we were back to the car! 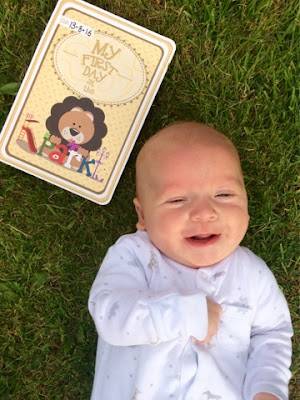 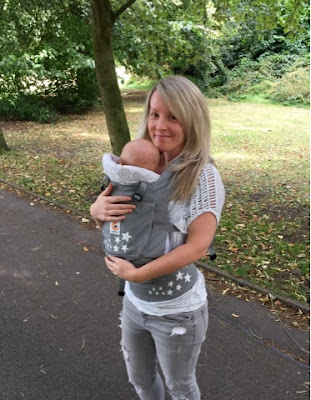 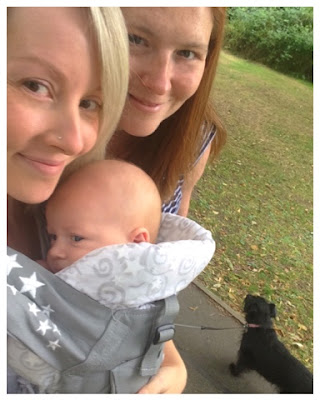 And just like that, we have a ten week old! People say you can't imagine life without them and it's true, we can't. We love being his mummies more than we ever dreamt we would, it has brought us closer as a couple and shed a whole new light on our lives. He really is a special little boy and we are very very lucky that we get to watch him grow everyday. 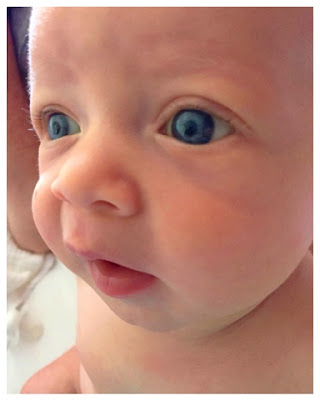 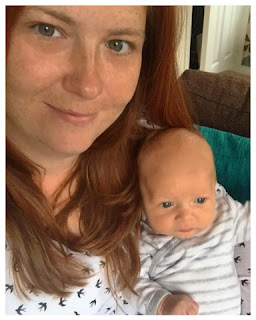 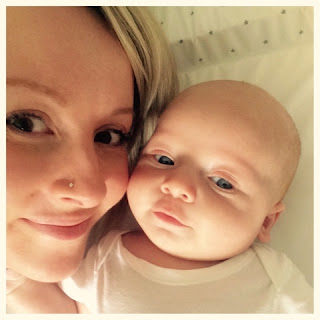