It seems many of our favourite brands we have discovered at the Baby Show - Cheeky Wipes, The Do Good Baby Company, and G Nappies to name a few. Unfortunately last time we were a little disappointed with the lack of innovation and originality on offer, until we came across a stall called Babease, that is. 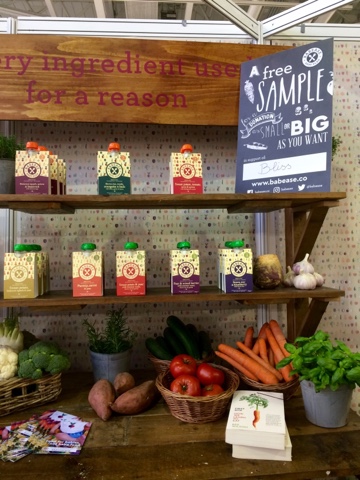 As Oskar was about 4 months old at the time, we were starting to look in to our options for weaning, for when he was about six months, so decided to take a look. Their stall looked fantastic, with lots of multicoloured veg, and we spent a while chatting to the owners of the company about the products they offer. 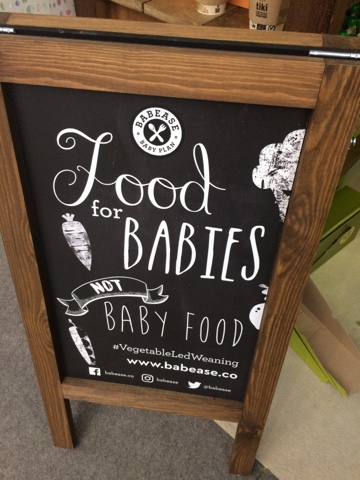 Created by a chef and a nutritionist, Babease make 'food for babies, not baby food' - a range of vegetable led recipes where 'every ingredient is used for a reason'. The owners explained to us that many baby food pouches on the market that sound like they are full of vegetables are actually bulked out with sugary fruit. Although fruit isn't bad for babies, it is thought that by giving vegetable based tastes to begin with, you will build their palate to accept and enjoy savoury, vegetable flavours and tastes and not just go for the sweetness found in fruit. 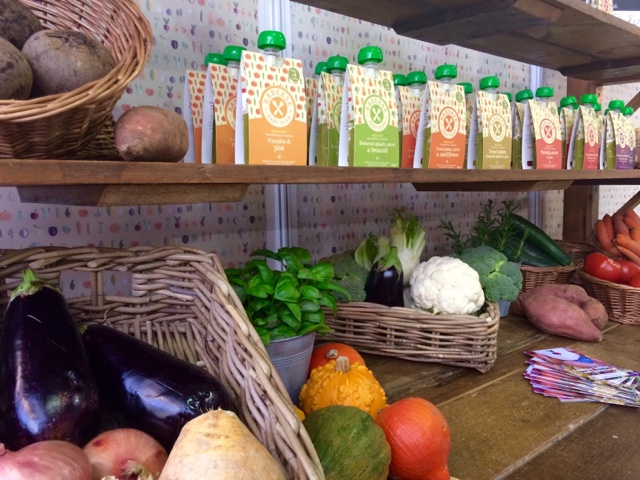 Babease have two stages available - 4+months, which are smoother purees, gentler flavours and use a maximum of 30% fruit, and 7+ months plus, which are chunkier, and the savoury recipes have 0% fruit.
Both are focused on using premium organic ingredients, sourced in the U.K where possible. 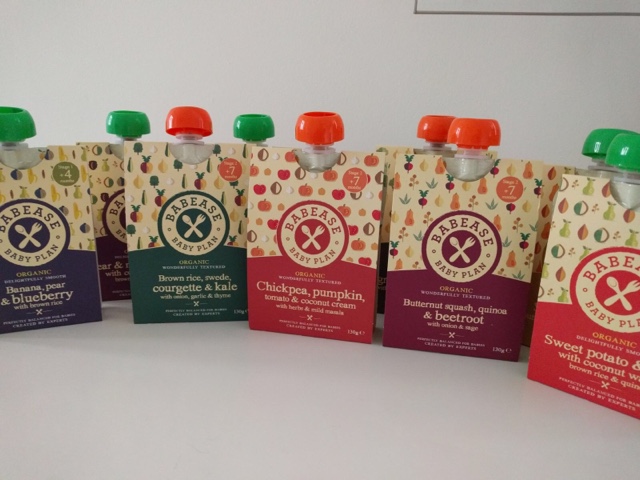 The vegetable led recipes from Babease introduce babies to real foods and flavours, rather than just sweet fruit based puree, and they use some flavours never included in baby food flavours before, helping babies to develop broader palates. We are definite foodies and love trying new things, so we definitely want our son to be as adventurous with food!
The recipes in the 7month+ sound like meals we eat ourselves! 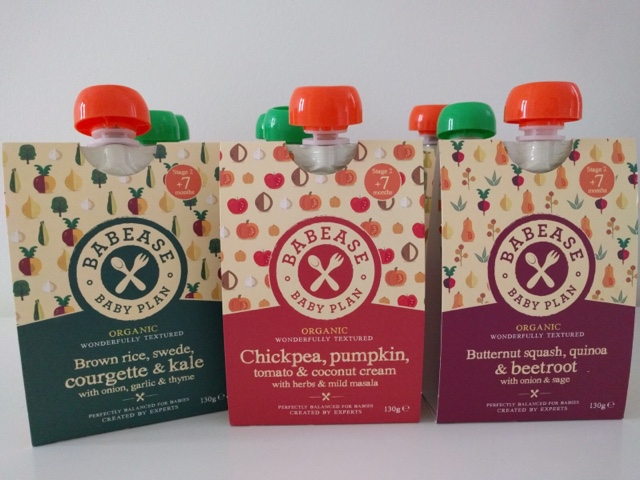 The ingredients in the pouches are listed clearly on the back in a wheel chart form - so you can easily see every ingredient in the pouch, and how much of it makes up the whole recipe. 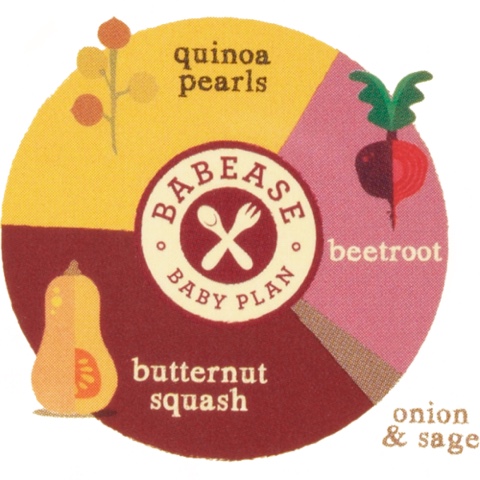 We also chatted to the owners about the fact that although we thought the Babease products sounded amazing, we were leaning more towards the baby led weaning approach. They told us that pouches can actually be used with baby led weaning, and were used by a relative of theirs who successfully used the baby led weaning method with their baby (more info on this coming up!)

Babease kindly sent us a box of amazing goodies when Oskar was ready for weaning at six months, including lots of their yummy pouches, and one of their adorable bib in a bags! (The bibs in bags are available from their website for £4.99, we have our eye on the butternut squash one!). 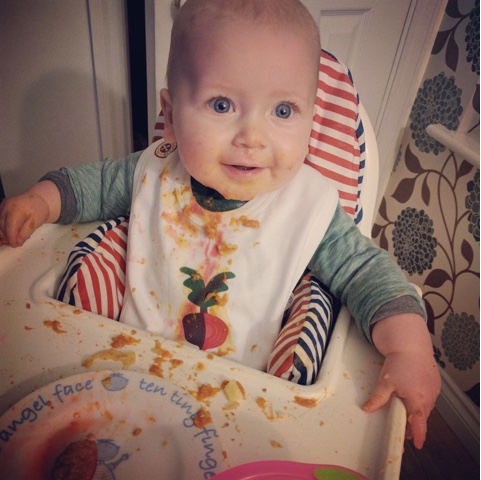 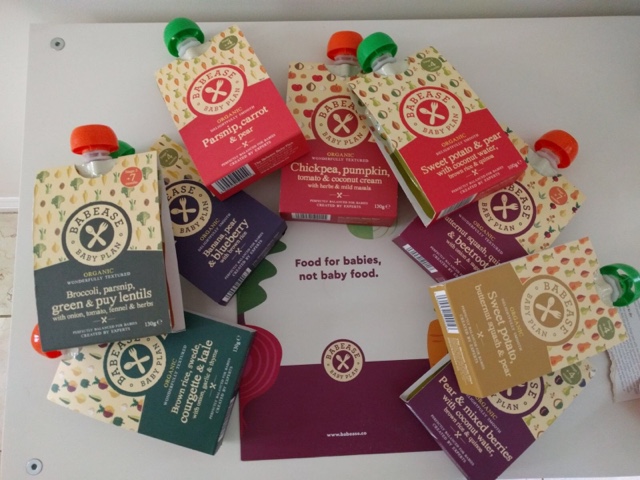 As we've mentioned before, we never write here about brands we don't genuinely love - they need to be great products, either innovative , ethical or both, with great companies behind them.
And we can genuinely say, we loved these pouches! They made aspects of baby led weaning much easier (again, we'll discuss this shortly), and it was great having peace of mind that we knew exactly what was in each pouch that we were feeding to our precious boy. It was also nice to have spoken to the owners before hand, which really gave us a feel for the company - they seemed so genuine and passionate, and obviously really believe in their products. Oskar was definitely a fan too! 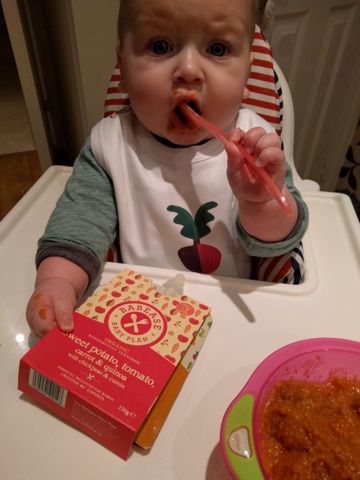 We've had quite a few questions about baby led weaning since we began our own journey, so we've answered the most common ones here:

What is baby led weaning?

Baby led weaning is essentially, letting your baby feed themself. Whether it's picking up preloaded spoons or baby friendly sized portions. It puts the baby in control of what they eat, how much, and when. The idea is to wait until the baby themselves become developmentally ready for solid foods, and this often around the 6 month mark. At first babies will sometimes just play with the food, especially as until they develop a 'pincer grip' they will grip the food in a fist. That's why it is important in the beginning to offer foods which are easy to grip, like finger sized pieces of vegetables, toast etc. It is said that babies who are baby led weaned are more likely to enjoy a wide range of foods, and can join in with family mealtimes!

We want to follow the baby led weaning method - surely you can't use pouches for this?

Yep, you can! The owners of Babease explained that the pouches can be mixed with other foods to make meals that can then be placed in front of your baby. For example, to make a quick and easy lunch for Oskar, we have used a pouch as a soup base, adding in some chunks of softened veggies, and put it in a bowl with some bread on the side that Oskar loves to dip in to the soup. We give Oskar the same meal as we are having, but found the pouches useful to replace parts of our meal that were too spicy, sugary or salty for Oskar. Like for example a pre-bought pasta sauce may be full of sugar and salt that we don't want him to have, so as we eat pasta and sauce he does too, but his "sauce" is a babease pouch instead. We have also used the pouches as toast toppers, in pinwheels, or just as a snack (hand him a pouch containing his beloved pumpkin and he will suck the whole thing dry!) 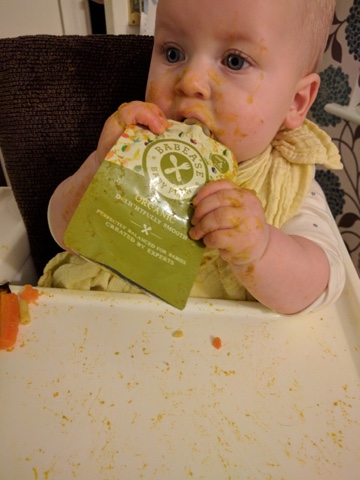 We have also used the pouches as a basis for healthy recipes, such muffins and dips. For example the carrot, squash and cauliflower made for a yummy snack mixed with oats, eggs, grated apple, mashed banana and a few spices. The result was soft, flapjack like and Oskar thought it was delicious! A very easy breakfast or middle of the afternoon snack. We also lived that inside the paper sleeve of each pouch is a recipe containing the same ingredients as the pouch, so it really does enforce the idea that these pouches are easy to use in a baby led weaning way! 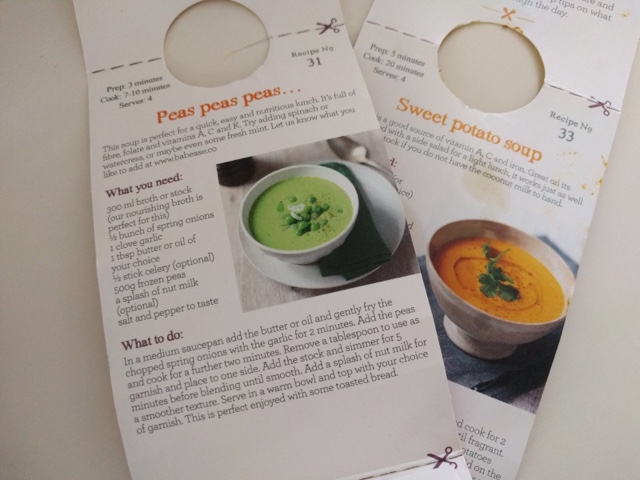 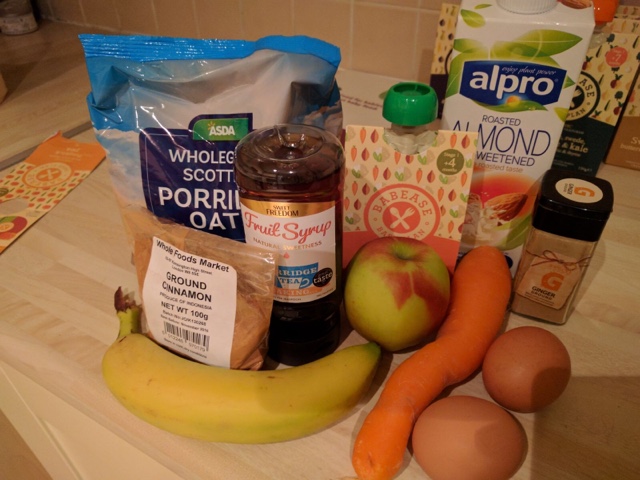 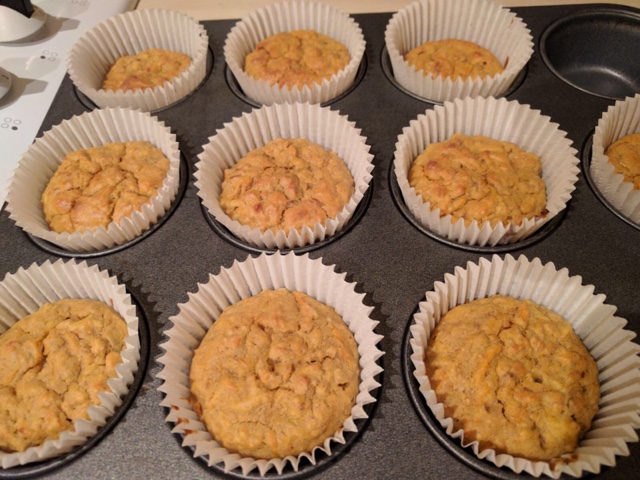 With baby led weaning how do you know how much they are getting?

Honestly, it doesn't matter. At this stage, weaning isn't about consuming vast quantities of foods, it's about learning how to eat. Learning about food. What it feels like, tastes like, what to do with it. Milk is the main source of nutrition until age 1, so food is an added extra, it doesn't really matter how much food they are taking in  because the baby is still having mostly milk.

You have mentioned you eat a 100% vegetarian, largely vegan diet - will your baby be vegetarian?

Yes. We do not eat meat for ethical reasons - we think it would be quite strange if we had that view, but then bought and cooked meat and fed it to our child! If our child/ren decide to eat meat when they are older, that's fine, as long as they realise how it is produced, but we will never buy or cook meat in our home.
We have been met with various doubts over this - from a confused 'but don't babies need meat?' to family members laughing that they will feed Oskar meat, and one stating that we should feed Oskar meat until he is 16 and can decide for himself.
We find this odd - why do people think they can decide that Oskar can't be vegetarian until he's older, but we can't decide that he's vegetarian now unless he decides otherwise when he's older? If we don't feed Oskar meat, and he does decide when he's older that he wants to eat meat, no harm done.
However if you switch that, and we did feed him meat, then when he's older he decides to be vegetarian, it would be surely quite confusing to him that we deemed meat to be disgusting, wrong, and something we wouldn't consume, but felt it ok to feed it to him?

But is it ok for babies to eat the same as what you eat?

Yes! Apart from a few food such as honey, and foods containing too much salt, it is perfectly ok - as you can see from Oskar enjoying an English veggie breakfast, and avotoast! 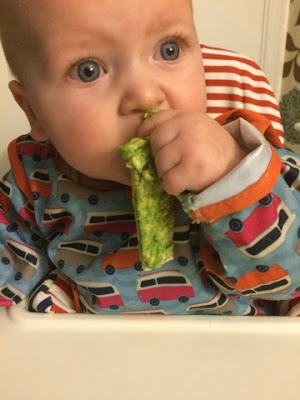 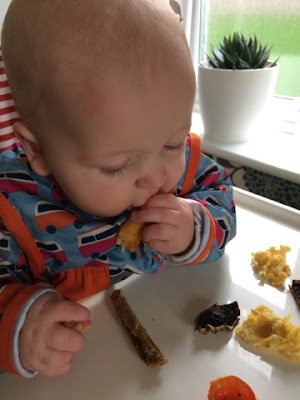 Where foods may have a sauce that is too salty for example, this can be replaced using a pouch. 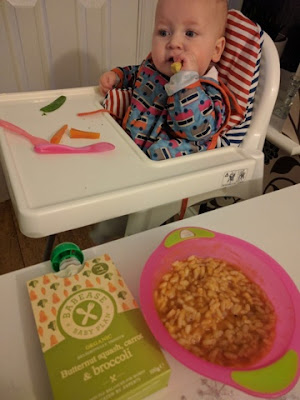 Well this is all well and good, but what does Oskar think? Well he loved them! It is the only time he has ever cries for more when it's all gone! So it's reassuring for us that he loves the pouches and we can be sure that what's in them is good quality.

So thank you Babease, for allowing us to sample your products, you have firm fans here! 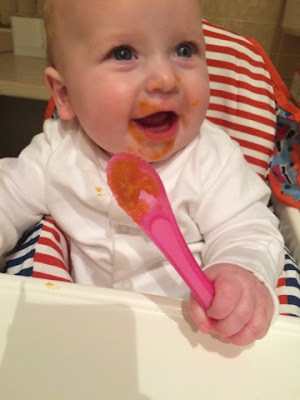