Well, where to begin with this post?! Oskar was six months old on 4th December. Six wonderful months ago he entered this world, tiny, curled up and so precious, placed in to his Mummy's top and we all fell in love. Six months ago today our world changed forever. It has passed in the blink of an eye, in a heartbeat, in a breathtakingly beautiful second.

The thing that scares me the most is just how quickly time passes when you have a baby. But also that somehow the details get lost in the time machine too. I want so much to remember each and every detail, to etch it in to my memory so I'll never forget, but I look back to a passing blur of sleepless nights, round the clock breastfeeding and singing silly songs to make him laugh. I want to remember each and every time his warm little body has fallen asleep in our arms, knowing how safe and loved he is, able to relax as our hearts beat in sync and our breath mimics each other's. I want to remember the feeds, all of them, the ones that hurt so much I cried but I did it because I loved him more than I could ever say, and the ones that happened and neither of us paid too much attention and it was just a way to fill an empty tummy. I want to remember his first smiles, his first giggles, the long nights and early mornings we spent walking with him, rocking him and holding him close to us. I want to remember the way he looks at his Mummy when she's been at work all day, so full of absolute love and wonder that she's here, he's back in her arms and he's delighted.
These were the moments I dreamed of since I myself were a little girl, and they came and went with such intense speed and awe-inspiring beauty that I know, I know that I will never be the same person again, only short six months ago. 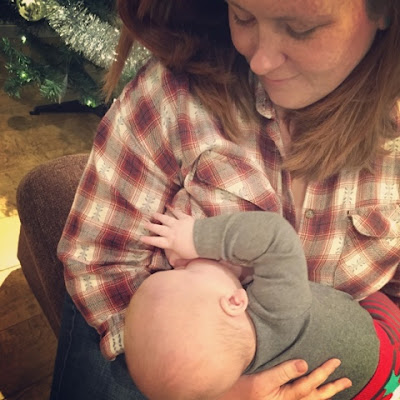 So Oskar at half a year old looks something like this...

He has such a little personality now, so full of cheekiness and giggles. He is the most laid back baby I know, such a happy little soul, he's happiest when he's around people but can get a little intimidated by loud noises or too many people. He loves to play, and definitely now has his favourite toys, particularly his jingle bells and little green frog rattle - anything that makes a good amount of noise! He is very very vocal and squeals and shouts and giggles and babbles away from morning to night, experimenting with his voice to make different sounds and words and tones and pitches. And he loves us singing to him! We now know pretty much every single nursery rhyme out there and sing them all day long to him, which is met with a beaming smile and lots of gorgeous giggles. His current favourite songs are "if you're happy and you know it" and "turtle tim"! 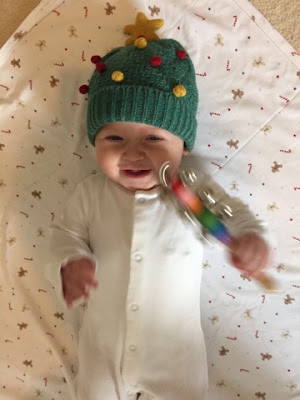 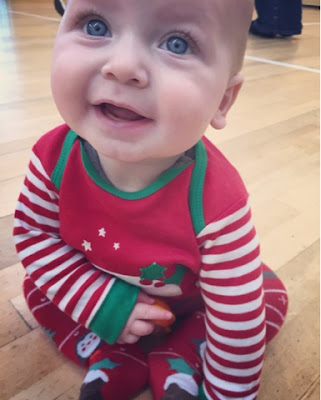 Our days are a happy blur of feeds, playing, singing and trying to get him to sleep enough! His absolute favourite things to do at the moment are go in the bath, especially in the big bath with one of his mummies! He loves splashing and kicking his legs and floating around in the water. And he loves going for walks in his sling, so he is cuddled right up next to one of us but can still see the world around him. He is fascinated with trees, birds, and everything else he can see. We hope he loves nature as much as we do! And he absolutely loves to watch Willow playing, he laughs his head off at her chasing her toys and wagging her tail and tries to reach out and grab her as she runs past (much to Willow's annoyance when on the odd occasion he has gotten hold of some fur or her ear!). 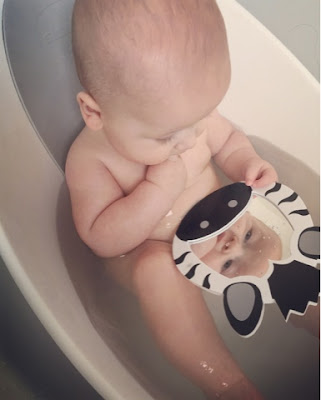 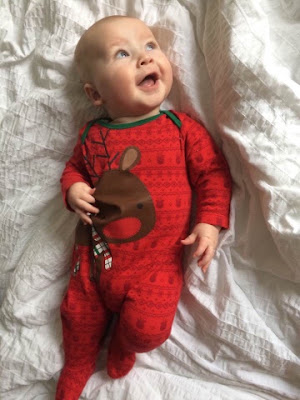 We recently upgraded Oskar to a full size cot which we have turned in to a co-sleeper attached to our bed. We have put him in his own room a fee times but he still wakes up so often to breastfeed that none of us got any sleep. Particularly as he usually spends part of the night in our bed with us, and it was very odd him not being there, even if having the bed to ourselves was lovely too! We realise he won't be this small forever and won't need to be in with us forever, so having a big bed + attached cot means we all get more sleep for now, and it's not a hassle for me to feed him in the night. 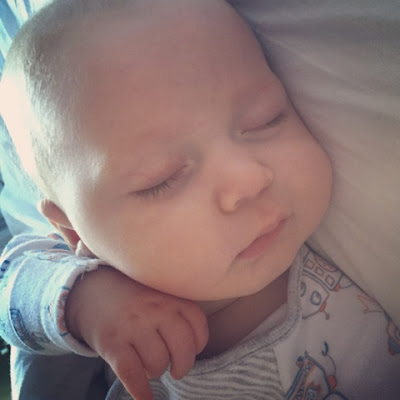 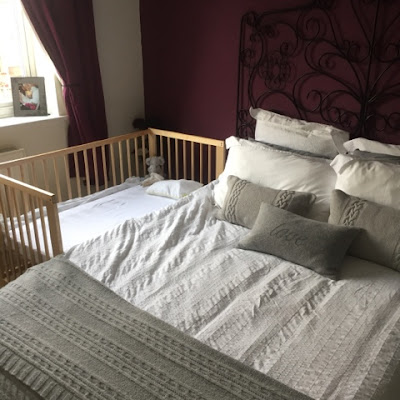 Talking of sleep there is a little hope that we are coming out of the other side of the four month sleep regression. We had about 8 weeks of him waking every 45 minutes, which meant I got very little sleep at all as felt like I was just constantly waking up to feed him back to sleep, but he past week he has woken up around 3 times a night. Fingers crossed it gets better and better from here, I am one very tired mummy! Nap-wise he still sleeps for about 40 minutes at a time, in our arms only, try and put him down anywhere and he will tell you of his unhappiness of the situation!! But I can honestly say I don't mind, he will be such a little boy for such a little time, he can sleep in my arms until he no longer needs to as far as I'm concerned!

We are very proud that Oskar can now sit unaided! At first he was very wobbly, and could only manage a few seconds, but over the past few weeks has been sitting for longer and longer periods of time. This was one milestone we were very keen for him to reach, as it brings him a whole new sense of independence and allows him to sit up and play more easily than when he's lying on his back. He's also getting more comfortable on his tummy, and is spending longer and longer on his tummy, reaching for toys and playing with them. He likes the practise the crawling motion too, but hasn't actually managed to get anywhere yet! He prefers to work on his fine motor skills instead, and is desperately trying to understand how to get a pincer grip, and spends time moving his fingers and watching them trying to understand how to make them do new things. It is fascinating and beautiful watching him learn and grow. We are still awaiting the arrival of his teeth, despite many nights of him crying out in pain and needing a cuddles and milk to help him through it! 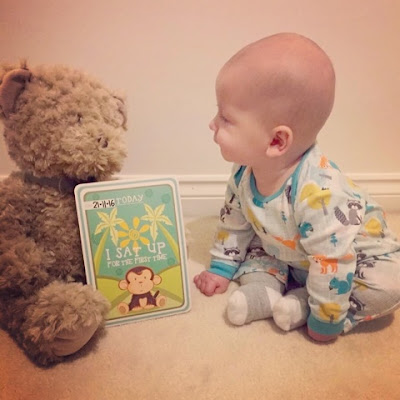 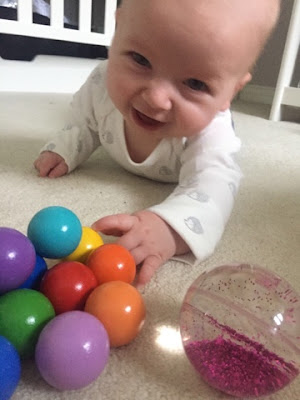 One thing that interests us is that you never really know what kind of parent you will be until you become one, and neither of us expected to be the way we are. We find ourselves being very gentle with Oskar, reading in to attachment parenting, gentle parenting, extended bed sharing and breastfeeding and finding we, on the whole, agree with the theory and find that naturally we are practising it. We don't define ourselves by any particular style of parenting, but the gentle way seems so much common sense, so much about treating children with the respect they deserve, and how you yourselves would want to be treated. It's lovely that we are on the same wavelength and agree with each other's style of parenting Oskar. 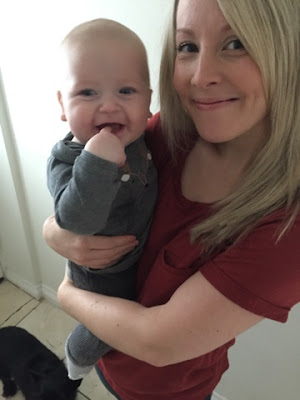 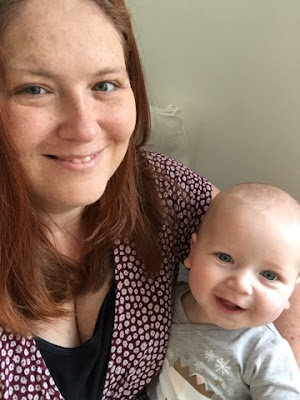 One of the things I love most about him at six months is his love and recognition of the important people in his life, the way he smiles with absolute delight when he wakes up in the morning and sees his Mummies next to him, how excited he gets when he sees his Grandparents and reaches out to go in their arms, and how he grizzles and moans when someone walks away from him. The beginnings of separation anxiety I suspect, realising that his mummies can indeed put him down and walk away, but it's heart warming and lovely to know that he wants to be with us, and doesn't ever really want to be put down.

Oskar really is our dream come true. This time last year we had just announced our pregnancy and could only dream of what this year would be like. Well, it's more magical, more beautiful and more full of love than we ever could've imagined. I guess each year it's only going to become more amazing, and we really can't wait! 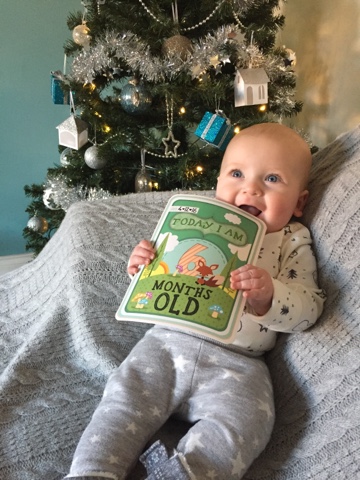