I actually can't believe it has only been about 6 weeks of us introducing food to Oskar, he has really taken to weaning like a duck to water. He was obviously ready for weaning to happen, as each time we offer him food he has happily picked it up, chewed it, licked it, eaten some of it, or dropped it on the floor and then laughed his head off at Willow eating it. You hear many stories of babies who are baby led weaning and at 8 months still haven't managed to pick anything up, because they are just not interested. Oskar is most definitely our son, and loves his food!

We are currently managing to give two meals a day, usually a brunch type meal around 12pm and dinner with us around 7pm. Sometimes we have breakfast earlier or lunch a little later, but it's easier to combine the two and go for a brunch! Dinner may seem quite late for a lot of babies, but Oskar has always been a late to bed and late to rise kinda baby, and so it works perfectly well for him to eat with us at 7 and then be in bed for around 8:30. In fact the closer to his bedtime we eat the better he seems to sleep, which as adults seems rather odd, but I guess he likes to go to bed with a full tummy, even more so as he breastfeeds to sleep every night too. 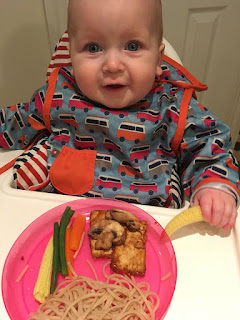 I am slightly concerned about how and when to go about adding in a third meal for Oskar, especially with snacks too. It's hard enough at the moment fitting in two, whilst making sure he has milk on demand and sleeps enough during the day! Ultimately I suppose, food before one is just for fun, and Oskar had certainly not dropped any breastfeeds as far as I can tell, so we will just follow his lead and there​ may well come a time when it becomes obvious he needs more food. 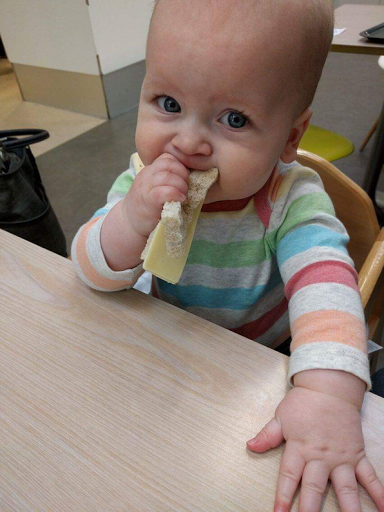 Baby led weaning is definitely messy, but it's really good fun too. At times I have to admit I have resented the clean up operation and have wondered if just spoon feeding him would be easier, but he grabs the spoon off us as soon as he sees it's got any food on, so I doubt he'd let us if we tried. It is amazing to watch his skills come on in leaps and bounds though, and I'd like to think it is partly down to the way we have chosen go wean him. He is now confidently passing things from hand to hand and has almost mastered his pincer grip. He has worked out how to bring food to his mouth in a fist and then open it to get the food in, and if something slips out of his hand he uses his other hand to catch it and push it in. I never knew you could be so proud of a tiny human for such tiny skills! 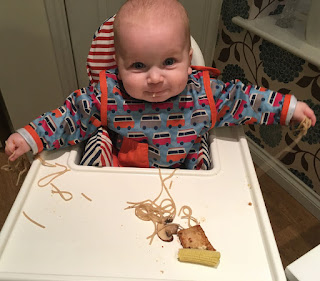 We are enjoying giving him new flavours, textures and tastes, and he is certainly showing us what he does and doesn't like. He likes most things, loves broccoli, pumpkin, bread, cheese and tofu, and absolutely hates porridge and weetabix, even made with milk I have lovingly expressed for him!
I wanted to share a few of our favourite baby led weaning recipes but will save them for another post. And will instead leave you with this picture from last week, when he had fed himself stewed plums and natural yoghurt. Gold star for effort baby! 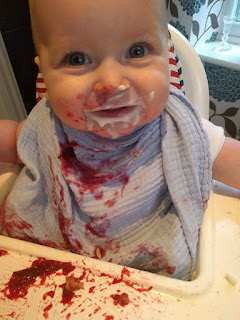 And we didn't think this would happen for a while...! 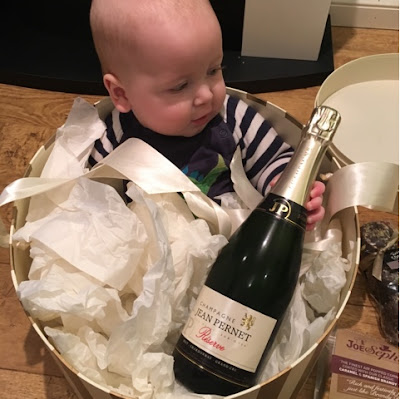 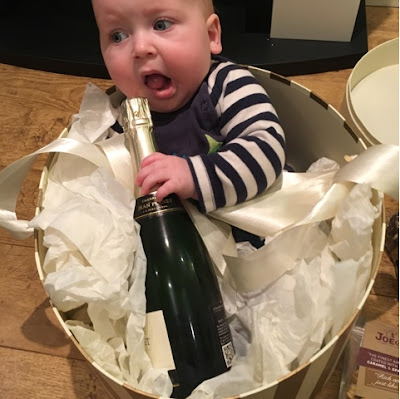