Oskar turned 10 months old yesterday but we have only just found the time to get this post published. I honestly don't know where the days go with a baby!
It has been 3 months since we wrote a post catching up on Oskar, and as he is now 3/4 of a year old it seems a very good time to write another. Before long he will be one, and we want to remember him at each beautiful stage, for all that it brings.
The phrase "the days are long but the years are short" is often in my head these days. Some days are long and difficult as I'm sure they are for all parents at one stage or another, but the weeks whizz by, and with each week that passes brings our little boy more skills, more sounds, more confidence. And with it we fall more and more in love with him. I honestly can't remember life without him. Not that I'd want to, he has changed us, he has completed us, he has given us a new direction in life, and he is our little dream come true. 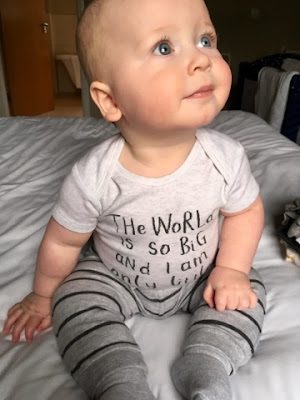 Since 6 months he has changed and grown and looks so much more like a little boy now than the tiny newborn we once cradled in our arms. He has four teeth, two on the top and bottom, gorgeous whispy golden hair that is beginning to form little waves. He wears some 6-9 and some 9-12 clothes, and when we last weighed him was around 20lb. 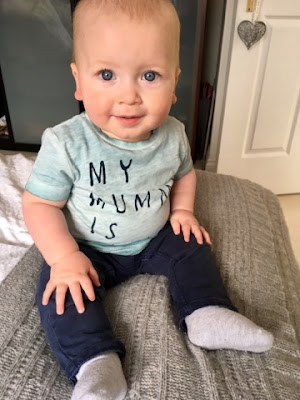 Oskar loves his voice, he rarely shuts up all day! He has quite distinct sounds that continue to evolve and expand, and although he is too young to be saying words yet, you can hear that the beginning of the words are already there. "Oh" when he sees Willow, "mama" when he wants one of us, "mmmu" when he wants milk. He is learning to sign too, and can ask for milk when he wants it, and reaches his arms out to be picked up. He can tell us when he wants more, and when he's finished, and there's a difference in the way he asks for milk, food or a drink (of water).
He is probably going to follow his mummies and be very chatty but not particularly active! He has been sitting unaided since 5.5 months but shows no sign of moving yet. He still hates being on his tummy and protests if we even try! But will stand holding on to things for a while if we help him up. He is far more interested in his fine motor skills - he can clap, wave and pick up objects that aren't in easy reach. His absolute favourite thing to do at the moment is throw. He learnt to throw balls about a month or so ago, and now throws everything in sight! He loves to sit and play 'catch' with us. His skills are evolving all the time and it's incredible and beautiful to watch. He loves turning pages of books, he loves emptying things out of containers and then dropping it all back in again, he loves pulling things up to look under them, putting things over his head and pulling them back off, and he loves shaking and banging things to hear what sounds they make. 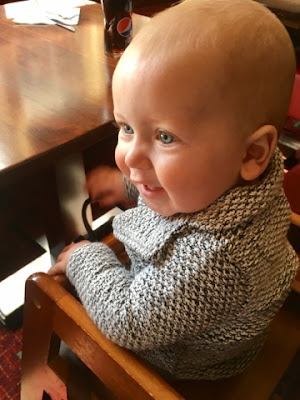 His favourite activities at the moment apart from playing catch are reading books, sitting on the floor and exploring his treasure baskets, going for walks in the sling and going in the bath. Oskar really really does not like having his clothes or nappy changed, going in to his car seat (he's fine once in, it's the going in he complains about!) or being put it to his sleep bag (he knows bed time is coming!).
Weaning continues to go well, we are so lucky that our tiny boy loves food so much! He eats 3 meals a day and sometimes fits in an afternoon snack too. This means that very recently he has started to drop breastfeeds. I honestly couldn't tell you how often he normally feeds, as it really is just on demand, but i have noticed the last few weeks that he has only wanted maybe 3 feeds between waking in the morning and feeding to sleep at night. A far cry from the half hourly deeds of his newborn days! His favourite foods are broccoli, paneer, almond butter toast, passion fruit and yoghurt. But really, he will eat anything and everything apart from porridge or cereal! 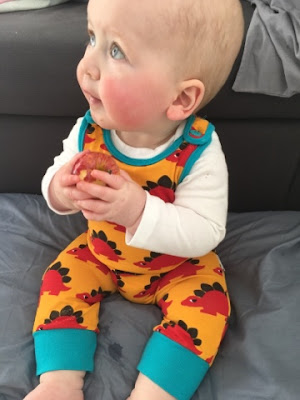 And finally, the holy grail for parents, sleep! Well i can't say Oskar is an amazing sleeper but he is a baby so we'll let him off! I breastfeed him to sleep at around 8pm and he sleeps for 12 hours, waking anywhere from 2 to 22 times in the night for a cuddle or some more milk. The easiest way to describe it is that he dream feeds, because he doesn't wake up fully, he just does this gorgeous little sleepy movement where he searches for me with his arms outstretched and his mouth open! I love it so much! He still spends some of the night in his attached co-sleeper cot and some of the night in bed with us. We figure while he is still feeding a lot in the night this is the easiest way, and i think I'll miss him a lot when we make the full time move to his room! During the day he is hovering between three shorter naps (25 mins!) and two longer ones (45 mins!) He isn't the best at napping but never really has been, and it just makes him, well, him! He prefers to sleep in my arms and absolutely won't sleep alone, unless i feed him lying down and then ninja roll away when he's asleep (and then he wakes up 5 minutes later!). We are really relaxed on the sleep front, as we are with most things in life. We realise that sleep is largely developmental, and that eventually all children are happy to sleep alone, and sleep through the night. But for now we will just enjoy his sleepy snuggles and keep drinking a lot of coffee! 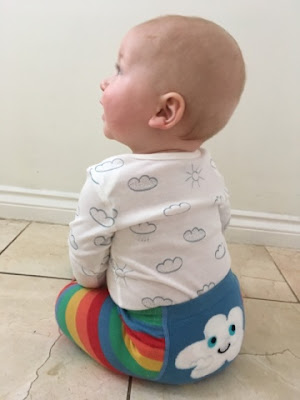 Our tiny boy smiles from the moment he wakes up to the moment he falls back to sleep. People stop us in the street to comment on his smile, or his eyes, and ask if he's always so happy. The truth is he is, yes. He has the most beautiful, peaceful, happy personality and is just a joy to be around. Thank you for 9 incredible months Oskar, you are our whole world, i cant wait to see what the last quarter of your first year brings you. 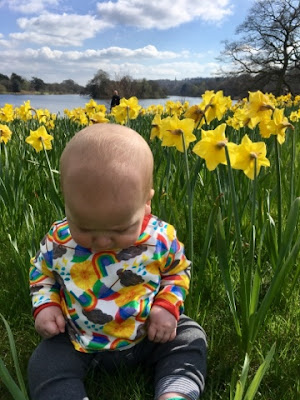