We woke on Thursday to heavy rain. I guess that a gamble you take when you decide to holiday in the UK, the weather is unpredictable in the very least! But we decided just to spend the morning relaxing in our cottage and enjoying playing silly games with our boy. He has started to really enjoy making up his own games, which he will repeat over and over until he can't anymore because he is laughing too much to move! It's lovely just to be able to enjoy being altogether.

We were lucky though that the weather decided to change just after lunch, meaning we could go out and explore some more. After a quick look at the map we decided just to find the closest national trust place and go there, being members means even if we don't love a place it's a nice thing to do for a couple of hours. We drove through the countryside to a very grassy, secluded little car park and wondered if we had the right place. Ahead of us there was just a dirt track and a hill...and we realised we had left our trusty Tula carrier back at the cottage. But undeterred we decided just to walk for a little while and see where the path took us. 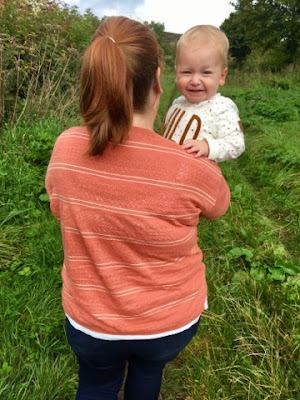 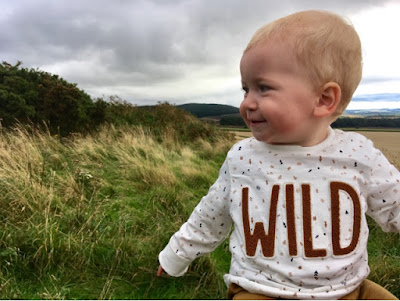 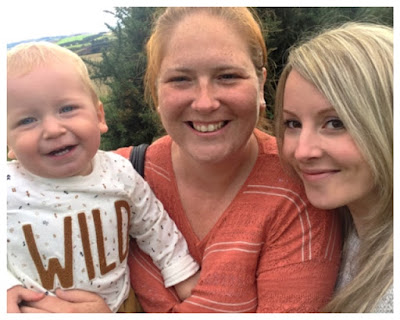 Once we reached the top of the hill we were rewarded with the most incredible views of the countryside. 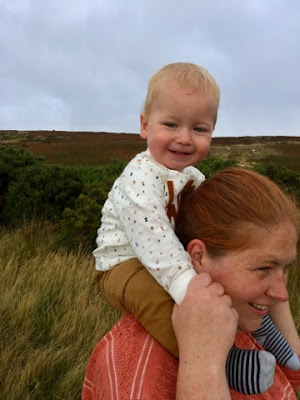 Like his Mummy S, Oskar loves the forest and immediately started exploring  - all those pine cones to sort into piles! 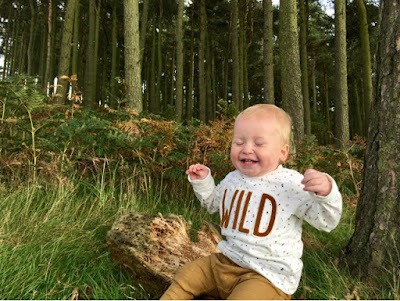 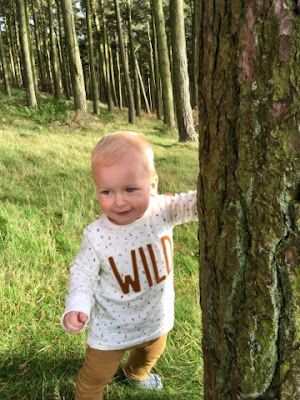 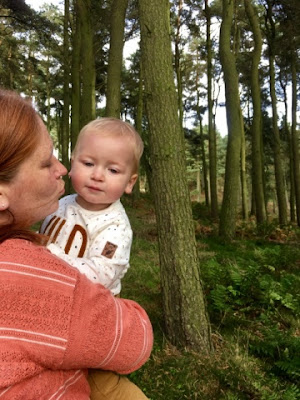 Carrying on through the trees we reached some caves, set in the most beautiful clearing, amongst tall trees and sprawling blackberry patches. It was one of the most beautiful, serene places we've ever visited, we completely fell in love with it. 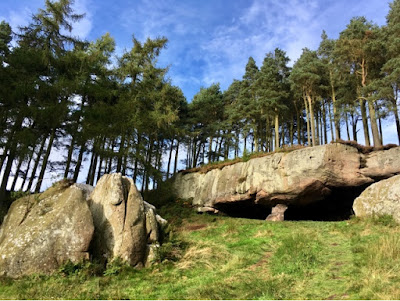 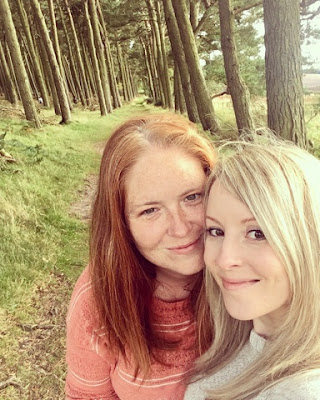 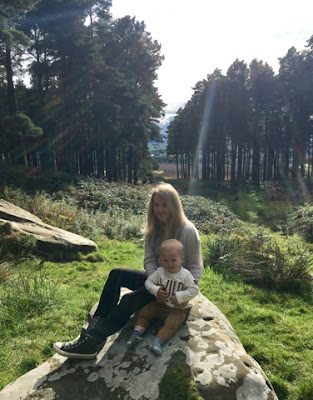 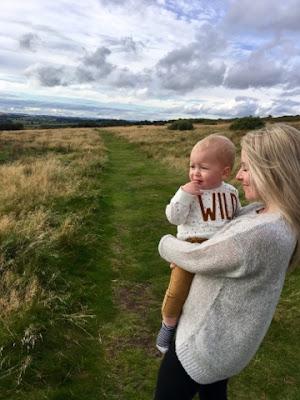 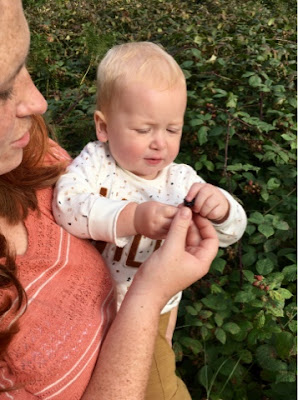 To finish off such a beautiful day, we returned back to the little hidden beach we'd loved so much. Again we were the only people there, apart from a man with his two dogs. The dogs were jumping and swimming in the waves, and we all had so much fun watching them, with us drinking tea and Oskar of course, sorting pebbles! 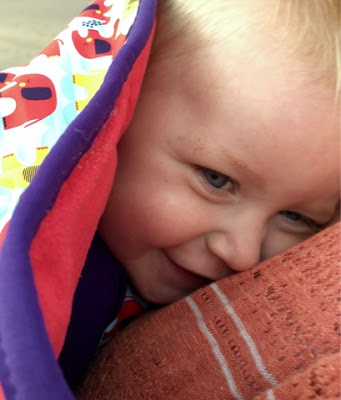 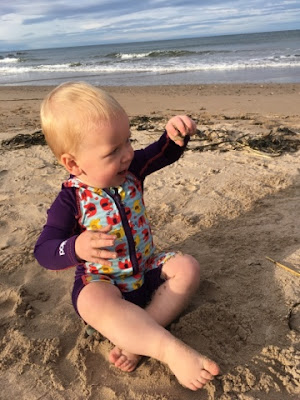 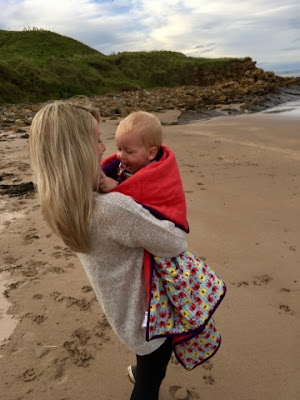 It was one of the most perfect days we've had, and one we'll all remember for a very long time. It just shows how spending time surrounded by the things and people that mean the most to you can bring the happiest of days, no matter how simply they are spent.
We returned back to the cottage with happy hearts, and marked our last night in Northumberland by cooking a delicious Indian meal and enjoying a glass of cider or two! 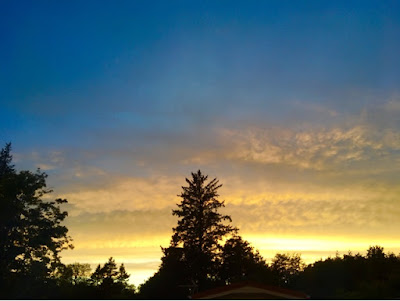 On Friday we decided to see a bit more of the area before leaving Northumberland, so decided to take a trip to Lindisfarne.
The drive was unique in that you are driving to an island, effectively over the sea bed, whilst the tide is out! Great care has to be taken to make sure you check the tide times, as many people have gotten stuck on the island! 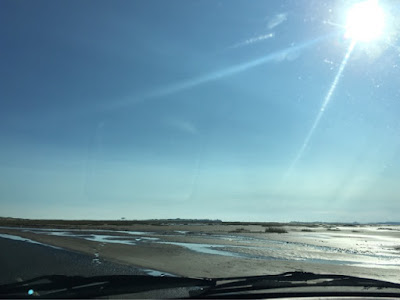 Whilst we were there we made the most of the sunshine by walking to Lindisfarne Priory, which was built 1400 years ago. Now in ruins due to a Viking attack,  it is still impressively beautiful, particularly the 'rainbow arch' which still stands despite the tower above it collapsing 200 years ago. 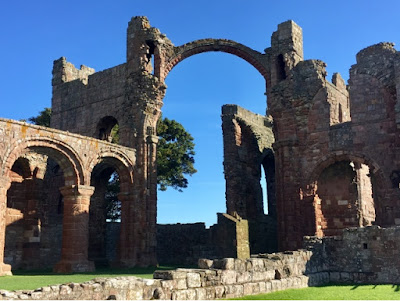 Finally saying goodbye to beautiful Northumberland, we drove on to our next destination of Leeds. Another location that held a lot of memories for us - we became a couple in Leeds on 25th September 2004, and lived together for the first time there for a few years until 2008. So this time we went on a little tour of old haunts - driving past our old neighbourhood spotting restaurants where we had enjoyed dates, little independent shops we had bought each other gifts from, and a tree with heart shaped leaves - one of which I picked on our 1st anniversary, 12 years ago! We also drove past the house where we used to live, which was so strange, and a little emotional!
After so much excitement, we stopped off for a lunch at a cafe that was child friendly, vegan friendly and dog friendly (sadly we didn't have Willow with us!). Our food was amazing, and we definitely want to return to try the breakfast menu! 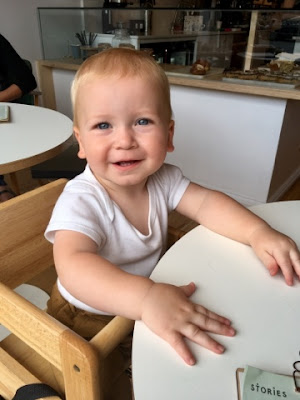 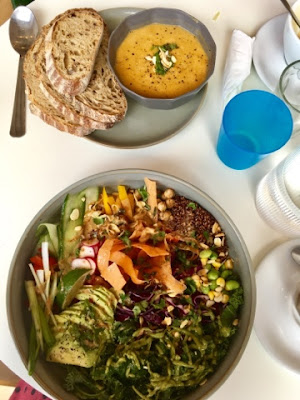 Our next stop was Roundhay Park, a pretty park near to our old house that was the location for many of our Sunday walks - we never imagined we'd be returning one day with our son! 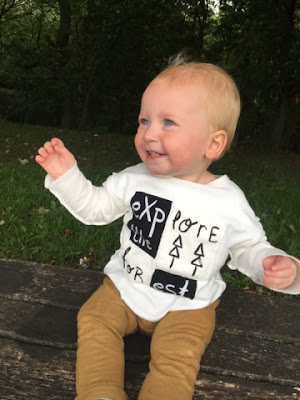 We spent Saturday in Leeds city centre, visiting a café for lunch and wandering around the Corn Exchange, a circle building of quirky little shops. After a while it all felt so familiar it was as if we never left! But all too soon it was time to leave again and return home, driving past Laurens old university, and another restaurant that was our favourite date spot. 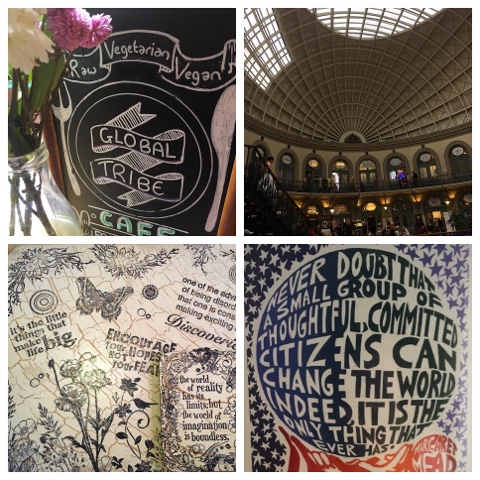 We returned home feeling many things - happy, peaceful, refreshed, and very much 'ourselves'. There's nothing better than surrounding yourselves with the people and places that make you who you are, and make you the very happiest you can be. It was wonderful, emotional, and so lovely, to look back at the places our love had began - aged 18 and 19, hopeful, optimistic, dreamers, head over heels. Now, aged 31 and 33 we have experienced the highs and life has to offer. We've graduated university, gained and lost jobs, travelled to ten countries, been to incredible places, moved out, grew up together, bought a house, got a dog, got engaged, got married, became mothers. We have laughed, argued, and fell more in love with each other with each passing year. Why? Because we knew, thirteen years ago that we had found our One, so we didn't need to keep looking. Neither of us were looking for love at that time - L was about to move away for uni, S was a free spirit in love with music and her friends - it definitely took someone special to turn both of our heads! But over the years we grew together, becoming each others support or safety - no matter what happens in life, we know it will be ok, because it always is, because we have each other. We know each other strengths and weaknesses, we make each laugh like no one ever has. And after thirteen years, we'll still excited for what the future will bring for us. Here's to 113 more! 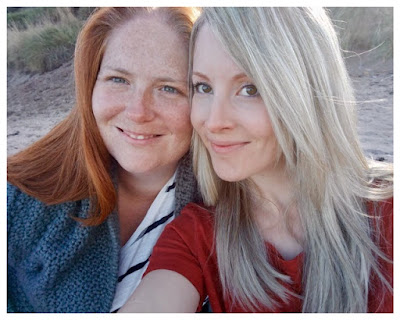